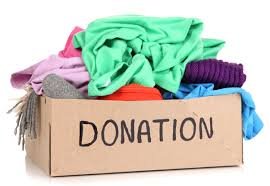 CAMDEN — DECATUR, Ill. (AP) — It’s the holiday giving season, but for some charities and thrift stores collecting used items, there’s a fine line between a blessing and a burden when it comes to what’s being received.

Organizations are put in the tough spot of being both grateful for contributions while having to wade through piles of donations that aren’t usable. Unwanted clothes are too frayed or dirty. There might be broken items, malfunctioning appliances, missing materials and other hazardous contents.

In the worst cases, what’s being given can’t be resold at all and is tossed out or recycled. All of that costs time and money, cutting into profits that could be used to support charity efforts.

Thrift store operators point out that most donors are good-hearted and virtuous, and don’t realize unusable items are a drain on resources.

“When the donors bring it over here, they don’t think it is junk,” said Rita Boyd, manager of the DMH Thrift Shop, a West Wood Street building operated by the Decatur Memorial Hospital Auxiliary that sells clothing, furniture, jewelry and kitchen items.

But “you have to expect there might be something that is not completely perfect,” Boyd said.

Adele Meyer, executive director of the National Association of Resale Professionals, a trade group with about 1,100 members, said it’s a pattern across the industry.

Donors “just want to get rid of it, and maybe they think they are doing good (and) they may not realize these have to be sell-able things,” she said.

“Nobody needs all of this stuff that they can’t sell,” Meyer said. “Sometimes they have to pay to get rid of this stuff; it is a real problem for them.”

And the size is growing. The industry went from 17,990 stores in 1997 to more than 25,000 in 2018, according to the U.S. Census Bureau. Nonprofit thrift stores usually rely on volunteer staffs to help religious or community missions. Overall, the firm First Research estimates the sector, which includes antique stores and resale shops, had annual revenues of about $17 billion nationally in 2016.

Generally, the model calls for a high volume of goods, but often not-for-profit stores can’t inspect items when dropped off. Bags, for example, might not be unpacked for a while.

Then there after-hour drop-offs. Most stores have strict policies and signs banning those, but bags and items still pop up during closed hours.

Stand-alone drop bins are vulnerable as well. On a recent afternoon, the large metal box in the parking lot of the Walmart on Mount Zion Road in Decatur was surrounded by bags and an analog television.

The old-fashioned TVs are especially challenging for thrift stores and nonprofit organizations. Under a 2012 state law, the tube televisions can’t simply be thrown out, which means groups getting them have to pay a disposal fee.

There are outside factors, too. Douglas, Oregon, shops saw a wave of less-than-desirable merchandise after trash fees increased. Several communities, including New Port Richey, Florida, and Joliet, have explored banning standalone bins.

Tracey Miller, manager of the Decatur Salvation Army Thrift Store, said TVs are dropped off “all the time” at the donation box when no employees are around.

“So what happens is, the people that bring them in here are too lazy and tight to pay to take them to the dump, and they can do this for free,” Miller said.

In February, 10 TVs showed up overnight at Blessingdales Thrift Shop, a West Eldorado Street storefront operated by the organization God’s Shelter of Love.

“Essentially, what people are doing is robbing charities,” Bacon said to the Herald & Review in February. “I know that sounds like really harsh words, but if it costs us money to recycle those, there is a sense in which a charity is being robbed when (TVs) are dumped.”

Earlier this fall, Erin Miller, a volunteer at the Lutheran School Association of Decatur Resale Shop, stood in front of a towering pile of black and white trash bags stuffed with clothes. There were cardboard boxes and totes as well.

The mound of donations in the East Cerro Gordo Street building is the donation pipeline for the shop, the starting point for the organization’s mission to help others. It is one of about 30 thrift stores in Decatur.

Manager Judy Gross said they don’t take electronics or large appliances like stoves or refrigerators. Donors will bring in goods after a garage or estate sale or when they’re cleaning out a house or moving.

“We are very fortunate,” Gross said. “We have a lot of wonderful people who donate to us.”

Items are shared with Northeast Community Fund, and they use almost everything.

LSA puts new items out all day long because they have enough items stored to restock constantly, Gross said. This keeps the customers coming back to make sure they don’t miss anything, she said.

“We have people that come in here every day,” she said. “They are usually here waiting at the door to come in.”

Not-for-profits will often give clothing to recycling companies who find other uses for the fabric. Otherwise, the items will go in the trash.

Thrift store operators say they make the best of what’s being given.

Susan Frey, the manager of Blessingdales Thrift Shop said they sell almost everything that’s dropped off, and what they can’t sell, they recycle. Proceeds support God’s Shelter of Love homeless shelter for women and children, Frey said.

Boyd said she loves getting donations because the items can be passed on to people in need. She can sell almost anything people bring expect appliances and things in bad shape. Sometimes, people will bring clothes that have holes or stains because they don’t realize it can’t be sold, Boyd said.

People also bring housewares that are broken or chipped. They also bring skillets or other cookware that is scratched up or burned on the pans, she said. When the DMH Thrift Store can’t use something, it’s put in their Dumpster.

“It is funny because they will say it is really good stuff, and sometimes it isn’t,” she said. “I have learned people have a hard time throwing things away.”

The donors aren’t intending to give something that can’t be sold, but they are trying to do a good thing, she said.

“We have a policy that if we wouldn’t buy it for ourselves or our family then we aren’t going to put it out for anybody else to buy either,” Boyd said. “We are kind of picky about what we put out because we have boatloads to choose from.”