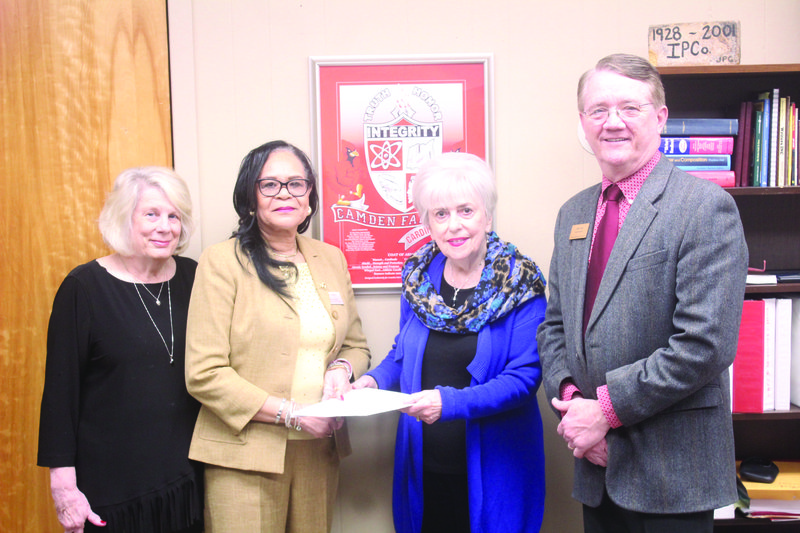 On Wednesday, the Rock 'N Read Program presented the Camden Fairview School District with $945 for the district's reading program.

The Rock ’N Read Program began in 1994-1995 as a program designed to give parents of newborns, books and developmental materials, so that the parents could begin giving reading and communication experiences to their children. This is also helpful so that as children enter school, "they will be ready to learn to read," states a news release from the organization.

"Hopefully, it would also instill love of reading in the children," the release states.

The program was later expanded to include children 1-4 years of age, who each year on the birthday month of the child received an age appropriate packet of books and reading materials. These packets were sent to each child enrolled in the program. Research shows, if a child can read successfully, he/she will possess the keys to success in school and life, states the release. The Rock 'N Read group also provided the following information:

• In the ensuring years, Rock’ N Read distributed the reading packets through the Ouachita County Health Unit, Ouachita County Hospital, Ouachita Valley Family Clinic, the Rock ’N Read Coordinator and individuals. Originally sponsored (1994-2009) by the Camden Fairview School District and Superintendents George Branch and Dr. Jerry Guess, Rock ’N Read was adopted in 2009 by SAU TECH and Chancellor Dr. Corbet Lamkin under the direction of Rock ’N Read Coordinator Paula Bergstrom and continued serving the young children of Ouachita and Calhoun Counties until 2016. Under the leadership of Paula Bergstrom, Calhoun County was added to the program.

• A new administration at SAU Magnolia, terminated the Rock ’N Read program at SAU Tech in 2016.

• During the tenure of the Rock’ N Read program, thousands of age appropriate books and developmental materials were given to the children of Ouachita and Calhoun Counties.

• Rock ’N Read became a 501c3 not for profit program, so a number of grants were received over the years from among others, Delta Kappa Gamma International, Ouachita Valley Community Foundation, Professional Association of Women Educators, as well as donations from local businesses, industries, churches and individuals. After Rock ’N Read was terminated at SAU Tech, the Rock ’N Read Board of Directors, under the leadership of Kathy Bowles Adcock, decided to give to the Arkansas Community Foundation the remainder of its assets to be known as the Rock ’N Read Endowment.

• Each year a check from the Endowment will be given to a local group that sponsors a summer literacy program for children in Ouachita County (and possibly Calhoun County) to help area children become more proficient readers.

• The books in book bags will be given to the students at a community wide Literacy Celebration at Camden Fairview High School in May 2018.

• The Rock ’N Read Program lives on as an Endowment at the Arkansas Community Foundation, the interest to be used yearly to help the young children of Ouachita County & Calhoun County become more proficient readers. Contributions can be made to: Rock ’N Read Endowment at the Arkansas Community Foundation Union Staffer 1400 W Markham Suite 206 Little Rock, AR 72201 A1 contributions are tax deductible under the 5013c section & the IRS code.