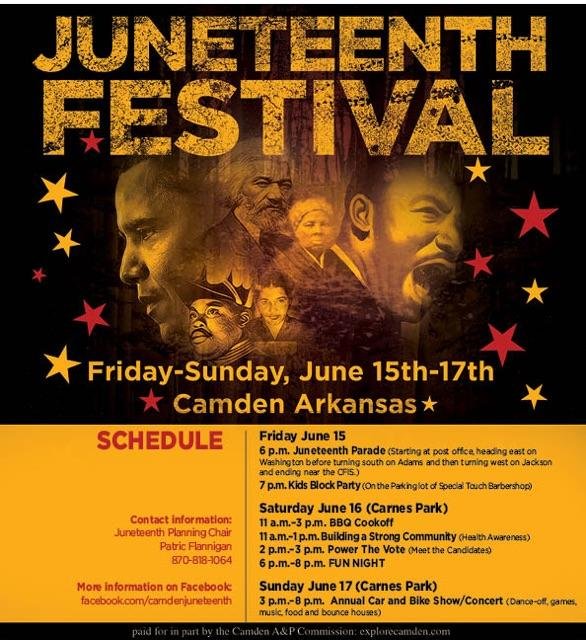 It’s that time of the year once again. The Camden Juneteenth Festival is slated for Friday through Sunday with a parade down Washington Street starting at 6 p.m. on Friday.

The Camden Juneteenth Celebration was started in the 1990’s by SACA Board President LaJoy Gordon and the Henrietta Cosmetology Chapter 25. Dating back to 1865, it was on June 19 that the Union soldiers, led by Major General Gordon Granger, landed at Galveston, Texas with news that the war had ended and that the enslaved were now free. Note that this was two and a half years after President Lincoln’s Emancipation Proclamation - which had become official January 1, 1863. The Emancipation Proclamation had little impact on the Texans due to the minimal number of Union troops to enforce the new Executive Order. However, with the surrender of General Lee in April of 1865, and the arrival of General Granger’s regiment, the forces were finally strong enough to influence and overcome the resistance.

The parade Juneteenth parade in Camden on Friday will feature the winners of the Miss Juneteenth Pageant that was held at the Camden Fairview High School earlier this month. South Arkansas Cultural Association Board Vice President L.C. “Buckshot” Smith will lead the parade that will honor two local legends - Darlene Porchia Carter and Terry Calahan.

Carter is a member of the African American Historical Committee of Camden Hall of Fame and served as the first African American Mayor of Camden in the 90’s before the city government was reorganized. Calahan is the founder of the AAHCC and the Camden Fairview Intermediate School Mentoring Program.

Following the parade will be a kid’s block party at the Special Touch Barbershop on California Avenue with Andre - “DJ 5’9” - Romby providing the music. There will be food, refreshments and dance competitions for all to enjoy.

On Saturday, the festival will ‘move the park’ with an emphasis on community improvement.

According to a news release, Juneteenth organizers wanted to prove that “Juneteenth is more than a car show in Camden. It is a time of reflection with a purpose of preparing to build a stronger community. This can only be accomplished by establishing unity between races, ages, (and) social-economic status.”

On Saturday, Juneteenth will have its annual cook-off from 11 a.m. until 3 p.m., but will also hold a health fair from 11 a.m. until 1 p.m. There will be a “Power the Vote” drive from 2- 3 p.m. where residents can meet the local and state candidates before the elections in November. Each candidate will get to introduce themselves and speak about their platforms. There will also be voter registration during the festival.

A bounce house, vendors, food, basketball, music and games will be at the park for “Family Fun Night” from 3-8 p.m.

The annual Camden Juneteenth Car and Bike Show and Concert will start at 3 p.m. on Sunday. Car show participants fees are $20 for cars and $10 for bikes. There will be trophies in both the custom and stock categories. Admission is free to the public.

Local young rappers “Drizzy Tae” and “Tre Reed” are set to perform at the event, along with “’Lil Deon” and more local musicians. Magnolia DJ Andrew “Drewster” Paschal will serve as the master of ceremonies.