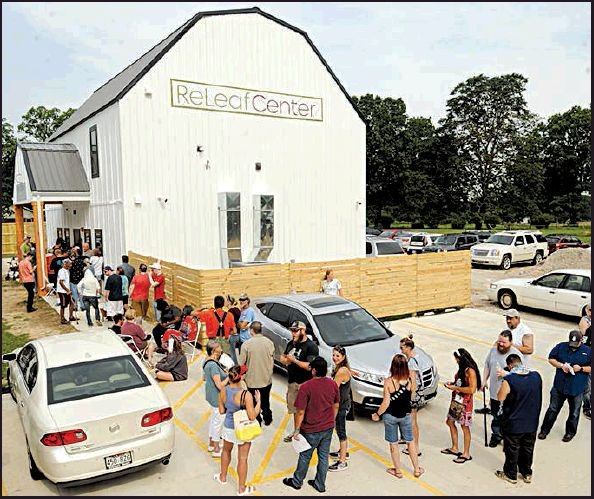 BENTONVILLE — Bradley Harris was No. 77 in line for medical marijuana Wednesday as Northwest Arkansas’ first dispensary opened for business.

The 32-year-old Bentonville resident and Army veteran, who said he has post-traumatic stress disorder, arrived at 7:45 a.m. at the ReLeaf Center at 9400 E. Mc-Nelly Road.

“I don’t like painkillers or Xanax or anything like that,” Harris said. “I was actually addicted to painkillers for about four years. It was rough. Then, I went to Colorado and tried this.”

Harris was one of the hundreds of customers waiting outside the ReLeaf Center. The center gave wristbands with numbers to customers in line, allowing them to leave and return without losing their spots or sit in a shaded area while they waited.

“We have more product than we can possibly transfer to the community over many days, so there’s no possibility we’ll run short on any products,” Buddy Waynewith the ReLeaf Center said Tuesday.

The dispensary ordered marijuana from three cultivation facilities in Arkansas and offers it in traditional form as well as concentrated oils and edibles.

“The community has been more than patient, waiting a terribly long period of time to see the medicine that they voted for,” Wayne said.

Arkansas voters approved the legalization of medical marijuana in 2016, but legal and regulatory hurdles slowed the program’s rollout. The first dispensary, Doctor’s Orders, opened May 10 in Hot Springs.

The ReLeaf Center is the seventh open dispensary in Arkansas, Scott Hardin, spokesman at the Department of Finance and Administration, said Wednesday. In addition to Doctor’s Orders, the others are Native Green Wellness Center in Hensley, Fiddler’s Green in Mountain View, Arkansas Natural Products in Clinton, Greenlight Dispensary in Helena-West Helena and Green Springs Medical in Hot Springs. In all, the state will have 32 dispensaries and five cultivation centers.

The dispensaries sold about $4.1 million worth, or about 600 pounds, of medical marijuana as of last week, Hardin said.

A patient or caregiver ID card is necessary to purchase the marijuana. More than 18,000 cards were issued in the state as of Friday, according to the Department of Health.

Medical marijuana helps Harris in situations such as being in a crowd, as he was Wednesday morning, he said. It also helps him sleep.

Angela Ayres, 44, of Rogers also was in line Wednesday morning and said she didn’t want to miss the opening.

“It’s Prohibition ending in Arkansas,” she said, referring to the 18th Amendment to the U.S. Constitution that prohibited intoxicating liquors. Prohibition lasted from 1920 to 1933.

Ayres has multiple sclerosis, a disease of the central nervous system, and said medical marijuana keeps her legs from swelling and mitigates headaches.

“A lot of people with MS take narcotics, and I choose not to do it,” she said.

The ReLeaf Center served 135 customers as of 2:20 p.m. Wednesday, said Draik Files, a security guard at the dispensary.

The opening was delayed from last week after an Alcohol Beverage Control Board inspection.

“Both were extremely well-prepared,” Hardin said.

Dispensaries in Arkansas are required to have tracking software linking to the finance department and the Health Department, Hardin said. The software ensures people don’t purchase more than the legal limit of 2.5 ounces of medical marijuana every two weeks. It also tracks data such as how much marijuana each dispensary sells and how many patients it serves.

Mike Bingham, 68, of Rogers said purchasing his medical marijuana took about 15 minutes once he got through the door. He got in line around 7:30 a.m. and walked out with his purchase at 9:50 a.m.

Bingham has arthritis and has driven about 200 miles to a dispensary in Hot Springs.

“I was on three different pain meds, and now I’m off all of them,” he said.

The finance department is prepared to give final approval to Arkansas Medicinal Source at 404 Razorback Drive in Bentonville, Hardin said. However, the company has decided to make changes to its tracking software, which could delay its opening until next week.

A representative of Arkansas Medicinal Source Patient Center said Tuesday that he had no news on the opening.