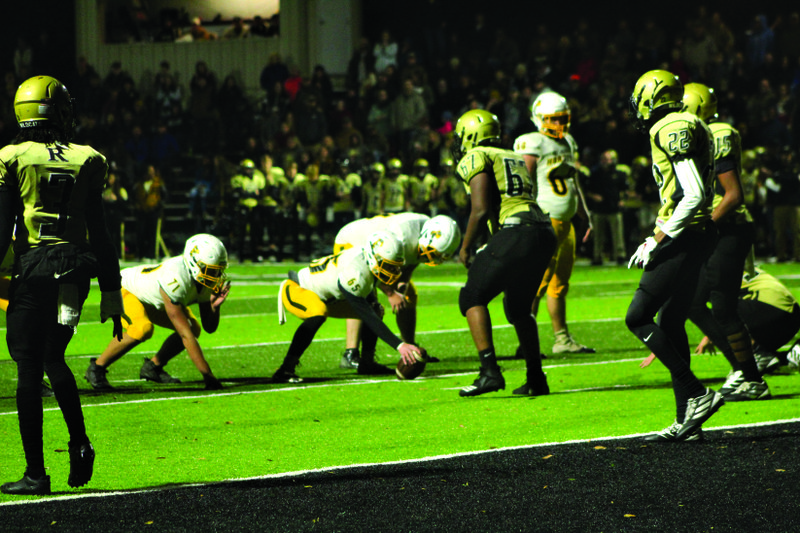 CAMDEN — RISON— The Harmony Grove Hornets used big plays on offense and good defense when it counted to score a 30-16 quarterfinal round victory over the Rison Wildcats at George Walker Field of Champions on Friday night.

The first half was all about defense. The Wildcats took the opening kick and put together a 10 play drive that ended with a fumble on the Hornets’ 7 yard line. Harmony Grove used 6 plays to score the only touchdown of the first half for either team. It came on a 66 yard run by RB Tobias Hicks with 4:55 to go in the first quarter. The 2 point conversion attempt failed leaving the score 6-0.

Neither team could get to the end zone the remainder of the half. Rison got close to scoring at the end of the second quarter but had a pass intercepted in the end zone with seconds to go in the half.

The offenses came alive after halftime. Harmony Grove went 3 and out to begin the third quarter. Rison mounted a 17 play drive that resulted in a touchdown with 1:47 to go in the quarter on a 2 yard run by RB Jamarein Frye who also scored the 2 point try giving the Wildcats an 8-6 lead.

Following the kick-off, the Hornets fumbled the ball back to Rison on their first play from scrimmage. The Wildcats turned it over on downs four plays later. Then, the Hornets marched 70 yards in 8 plays with RB Mecca Arnold scoring on a 5 yard run with 8:56 to go in the game. The 2 point conversion attempt failed leaving Harmony Grove up 12-8.

Rison responded quickly. After the kick, they set up at their own 43 yard line. QB Jaylen Henry sprinted up the middle for 57 yards and a touchdown. Frye scored on the 2 point attempt lifting the Wildcats to a 16-12 advantage with 8:42 left in the game.

Coach Ernie Horstcamp’s Hornets took the lead for good with 5:11 to go in the contest on a 30 yard pass play from QB Zach Smith to WR Damion Daniel. Once again, the 2 point play failed leaving the score 18-16.

Coach Clay Totty’s Wildcats turned the ball over on downs on their next series at their own 35. The Hornets took only 2 plays to score when RB Xaylon Falls scored on a 5 yard run with 2:47 to go in the game. The 2 point try failed. The visitors were up 24-16.

Rison’s next drive ended with an interception that set the Hornets up on their own 33 yard line. Three plays later Falls dashed 56 yards for the touchdown that sealed the victory 30-16.

Following the game, Horstcamp praised the heart of his team and their execution.

Harmony Grove will travel to Mississippi County next Friday night to face Osceola in the semi-finals of the Class AAA play-offs. Kick-off is set for

With the win, Harmony Grove improved its record to 11-2. The defeat ended Rison’s season at 11-2 as well.