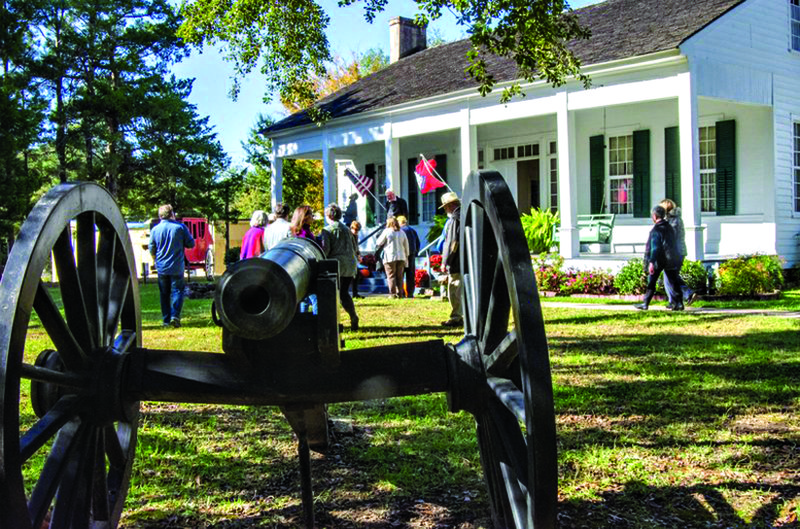 While “ramble” suggests an aimless excursion, the annual rambles planned by Preserve Arkansas are fun but organized outings with historic destinations.

On Nov. 2, the nonprofit formerly known as the Historic Preservation Alliance took a busload of ramblers south-and-west to Camden. The fall trip was billed as “Camden in Two Centuries: Life on the Ouachita.”

The organization — formed in 1981 as a group of like-minded folks interested in saving and preserving historic Arkansas structures — has been hosting rambles since the 1980s.

This ramble began at 7:30 a.m. on a chartered bus leaving North Little Rock. Group bus rides conjure memories of school field trips to dusty old museums, but these trips are a little different — as much a social event as a history lesson. As the bus hummed toward the first stop two hours away, guests were offered mimosas and bloody Marys.

Rachel Patton, executive director of Preserve Arkansas, and several volunteers made their way down the aisle several times during the day-long trip offering snacks, sodas, wine and beer. The beer was from one of the trip sponsors, Stone’s Throw Brewery, and owner Ian Beard was on board, personally filling each cup.

First stop was Tate’s Bluff, an unincorporated community settled in the early 19th century at the confluence of the Ouachita and Little Missouri rivers.

The first historic site was the oldest existing house in Ouachita County — a two-story log structure built in 1829 by John Henderson Tate, nephew of Capt. Richard Tate, who founded the community. Here the history buffs learned about significant dates in the history of Tate’s Bluff — from the Caddo Indians who once lived there to today’s efforts to preserve the cabin.

Members of the Ouachita County Historical Society and experts on the Civil War and local history and culture were on hand throughout the day to share their knowledge on what their ramblers were seeing. After peering in windows and doorways and listening to the history of the home, the tour moved on — not far down the road to a man-made, earthen structure — the Tate’s Bluff Fortification built on high ground above the river.

Its dirt walls formed a square fort with ramparts in each corner to hold cannons. It was built by Confederates defending Camden during the Civil War but never saw battle.

At the next stop, chilly winds blew off the Ouachita River as the travelers disembarked from the bus under a highway overpass. Waiting there atop a trailer was the Aux Arc, a keelboat much like the ones explorers and trappers used on the river during early expeditions. It was built by the Early Arkansaw Reenactors Association, and members were there in costume to talk about the boat and the trips they’d taken on the river.

The last stop of the morning, and probably the most sobering, was at Poison Springs Battlefield State Park, which commemorates a Civil War engagement in 1864 — an ambush of Union soldiers by Confederate troops. This is the place where members of the First Kansas Colored Infantry were killed by Confederates after the battle as they were trying to surrender.

The travelers gathered under a pavilion that houses an interpretive exhibit to hear about what led up to the Poison Springs event, the cash of arms and its aftermath.

Lunch was at the old Camden Post Office, built in 1896 and used as a post office until 1963. The building, now Postmaster’s Grill, was restored using the Federal Historic Tax Credit and features much of its original woodwork. Guests toured the building after lunch.

The rest of the tour was also in the city of Camden and included stops at the Ouachita County Historical Society where the ramblers toured the 1847 McCollum-Chidester House and learned about the area’s historic Camark pottery in the 1850 Leake-Ingham Building.

A guided tour of the Graham-Gaughan-Betts House, built about 1856, ended with a beer tasting on the patio of the old home with samples from the new Native Dog Brewing. While the home was beautiful and filled with antiques, what tickled many of the guests was an old candlestick telephone that still conveys a dial tone.

From there, guests rambled to Oakland Cemetery, where many early Camden settlers are buried. During a walk through the burial grounds, Ouachita County Historical Society members portrayed early citizens and shared their stories.

As the sun was setting, guests exited the bus for the final historic stop, a beautiful, Greek Revival, two-story home — the Elliott-Meek-Nunnally Home. Violin music played by a local musician floated down from the top of the stairs as guests enjoyed a Southern-style dinner of catfish and sides catered by Woods Place.

Some of the travelers were already looking forward to another Ramble. Layne Baker of Alexander, who recently took part in a Preserve Arkansas tour of midcentury modern houses at Jonesboro, says, “I can’t wait to go again next year, although I’m not sure where they’re going to go.”

Jill Judy agrees, saying, “No matter where they go, they’re going to highlight some aspect of the culture and the history of Arkansas that I absolutely would never have found out about otherwise. It doesn’t matter where you go because Preserve Arkansas will find obscure aspects of the local history.”

To find out more about Preserve Arkansas and future programs visit preservearkansas.org.