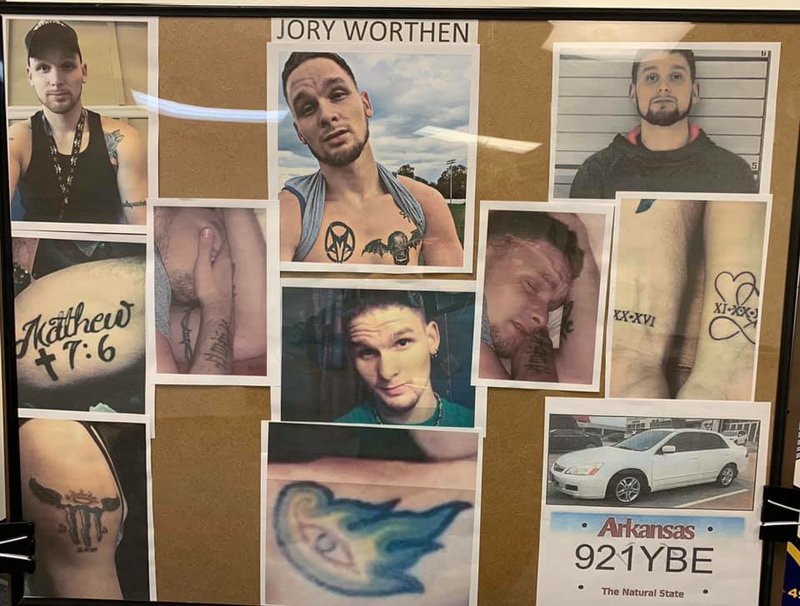 CAMDEN — A Facebook post from a Georgia bonding company states that Jory Worthen was reportedly seen in Sylvester, Georgia, at a Shell station Monday night.

Worthen is wanted for two counts of capital murder for the deaths of Alyssa Cannon and her son.

The post from Gonzalez Bonding Company goes on to say Worthen was seen with a black male with dreadlocks driving a a late-model, red Camaro.

Worthen is said to have been wearing dark jeans, a black T-shirt and a blue ball cap. The post also states that he was clean shaven and had longer dark-colored hair.

“There was a tip that we have been made aware of, of a sighting in Georgia,” Camden Police Department Public Information Officer Dana Wetherbee said. “We have contacted the U.S. Marshals and the Marshals are following up on that tip.”

On June 25, the bodies of Cannon, 20, and her son, 4-year-old Marshall Braydon Ray Ponder, were found at Cannon’s home at 1338 Ronald Drive in Camden. Worthen and Cannon were dating.

An August alert from Alaska state police noted that Worthen had not been seen in months.

“Worthen has not been seen since June 22, and the Marshals have information leading them to focus their search in the Western U.S. and Canada,” the alert read.

Worthen is six feet, two inches tall, 157 pounds with brown hair and eyes. He has multiple tattoos over his arms and torso, several on the underside of both forearms near his elbows. On the underside of his right forearm the words “Matthew 7:6” are tattooed. He has a tattoo on his right hand, his chest (a skull with wings) and his left bicep (barbed wire).

Anyone with information regarding the location of Worthen is advised to contact the U.S. Marshals Tip Line at 1-800-336-0102, or submit tips confidentially online at usmarshals.gov/tips. There is a $7,000 reward for information that leads to Worthen’s arrest.

Montez Charles-Xavier Woods, 22, was charged with hindering apprehension or prosecution for allegedly aiding Worthen in the days after the murders. A police affidavit alleges that Woods provided Worthen with $400 on June 27 near Chidester, Arkansas.

Woods is currently being held in Ouachita County Detention Center on a $100,000. His next court date is Dec. 12.