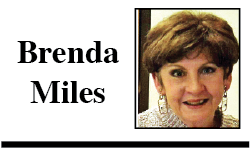 CAMDEN — Needless to say, this Christmas time will be a sad one for me. I’ve dragged out a few things to place on the hearth and mantle, but no tree…just twinkle lights on a fake ficus tree. In years past, when we both were in good health, we decorated everything that would stand still. Age comes. Energy diminishes. Illness happens. And so does death. I am taking our children on a Christmas visit to Galveston Island this year. I do not want to spend it in either home where we’ve spent former Christmases. Yet I still feel the magic of Christmas in my heart. Yes, Virginia, there is a Santa Claus.

In my youth, I would circle December 25 on the kitchen calendar and mark off each day before breakfast. When I came home from school, I went straight for the TV Guide in the ARKANSAS GAZETTE. It didn’t take long to read because we only had three channels, ABC, CBS and NBC. I was checking if there were any “Christmas Specials” on that night. Daddy made a concession for me. He gave up his Gillette Friday Night Fights if something really good was scheduled.

The living and dining room were kept closed, unheated, during the day. When we went in to light the fire before the 6:00 news, the aroma of Mother’s bowl of oranges and apples mingled with the fir of the tree to “smell like” Christmas. Mother and I would stand in front of the fireplace and hold up our skirts in the back to warm our bottoms. Did you ever do that?

Each channel tried to outdo the other each week in their elaborate Christmas “Specials” featuring the big stars of the decade. Even the sitcoms were special. For two weeks leading up to Christmas you could count on Lucy and Desi, Laura and Rob, June and Ward to have something related to Christmas in their story lines. Even Annie Oakley and the guys on Gun Smoke and Bonanza decorated for Christmas.

Although I wasn’t excited about The Jackie Gleeson Show, I couldn’t wait for him to say “And awayyy we go” so I could see the June Taylor Dancers. They wore the neatest costumes (one year they were elves) and the overhead shots–first we’d seen of this technique–made us think we were looking through a kaleidoscope as they went through their precision moves on the floor.

In fact, all the weekly variety shows saved their biggest stars for their Christmas broadcasts…Ed Sullivan’s “Toast of the Town.” The Steve Allen Show. Uncle Miltie. It was on the “Andy Williams Show” that I first saw “The Osmond Brothers.” Donny sat on his lap. ‘Guess Marie wasn’t born yet.

Perry Como was heading for Pennsylvania and “some homemade pumpkin pie.” Dinah Shore wore a Santa hat as she “saw the USA in her Chevrolet.” Pall Mall cigarettes dressed up its cartons with a red bow.

Christmas music was important. Radios were full of it. Your Hit Parade on Saturday nights could be counted on to include some of the “newer” songs in their Top Ten–“Frosty the Snowman,” “ The Christmas Song,” “Rudolph the Red-Nosed Reindeer,”and “Silver Bells.”

Of course, there were all the old movies we looked forward to each season—“Miracle On 34th Street,” “White Christmas,” “Christmas in Connecticut,” and, “It’s a Great Life.”

These, however, are not my favorites. That one I never see any longer. Writing this piece on a cold December day, I check the schedule in the newspaper. I have choices of “Dumb and Dumber,” “Jurassic Park,” and “A Harry Potter #???” THESE deliver Christmas cheer??

The one I keep looking for never appears. Couldn’t one station spare one of its 486th showing of “Clueless” or “Taken” for my Christmas favorite?

It is Earl Hamner’s “The Homecoming,” first broadcast in 1971, the forerunner of “The Waltons.” Set in 1933, it is the story of a poor rural family during the Great Depression. For me, it is the ultimate Christmas story of a family going through hard times as all of us have known in former years…a beautiful story that stays in your heart forever.

The father is overdue after leaving for the city to look for work. During that Christmas Eve night, the family goes into town where a missionary charity is giving gifts to the poor. Elizabeth, who pines for a doll, receives one only to realize its face is cracked. She’s comforted by her oldest brother, John Boy, who is an aspiring young writer. Later, at home, his mother suggests he go along the road to search for the missing father. He encounters the eccentric Baldwin sisters who offer him their forbidden homemade wine. Next, he enters a Black church whose pastor offers to go and help in his search. However, a fallen tree over the road stops them and a disappointed John Boy returns home. But his mother’s prayers provide the miracle late on that Christmas Eve. The father arrives just before midnight and delivers small gifts for all. He brings John Boy a Big Chief tablet for his writing–the hit of the evening. They all settle down to a meal a kind neighbor has delivered and enjoy a warm and loving Christmas Eve together. The perfect ending. The perfect Christmas.

Merry Christmas and goodnight to you, My Friends. And “Good Night, John Boy.”

Brenda Miles is an award-winning columnist and author living in Hot Springs Village. She responds to e-mail sent to [email protected]