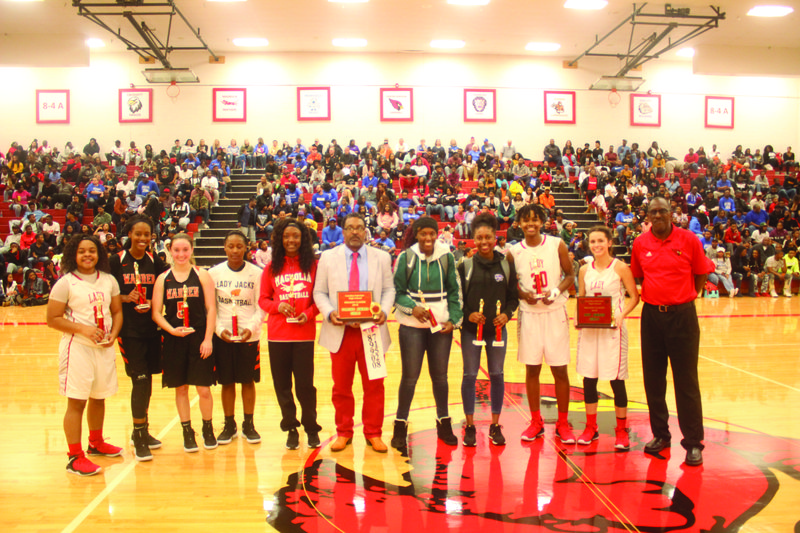 The Lady Cardinals started the game clicking on all cylinders with a 14-4 run to open the first quarter. Warren would respond with a 16-0 run and tie the game at 20. Much like the first meeting between the two squads, Warren would grab the lead in the third and go up 32-26 entering the fourth quarter. Things looked gray for the Lady Cardinals when one of its players was hit with a questionable technical foul, but the Lady Jacks were unable to take advantage from the free throw line. From there the Lady Cardinals would hustle its way back into the game when Raven Porchia flashed for a steal and hit Anna Dawson for a layup to make it a two point game, 34-32 in Warren’s favor. The Lady Cardinals would finally take the lead when Takari Glover came up with what was probably the play of the tournament when she intercepted a pass at half court and ran in for a layup to give C.F. the 40-39 lead.

The Lady Cardinals almost sealed the deal when it came up with another steal on the defensive end but a late whistle sent Warren to the foul line. The Lady Jack hit the front end and then confusion ensued when a couple of Warren players were instructed by their coach to leave the free throw lane and set up on defense. However, only one of the players did so and it was after the official had given the ball to the free throw shooter for her second shot resulting in a lane violation and sending the game into overtime tied at 40.

The Lady Cardinals were able to asset themselves in overtime play with Tai’Sheka Porchia scoring four of her game high 15 points in the extended period. Dawson and Glover combined to go 5/6 from the free throw line.

Tai’sheka Porchia finished with two blocks in addition to her 15 points. Dawson finished with 11 points, four steals and four assist and Jayla Jackson finished with 8 points two rebounds, two assists and two steals. All of which were named to the All Tournament team with Dawson being announced as the tournament MVP.

Jackson spoke to the Camden News following the intense game.

“It’s a wonderful time for the program,” Jackson said. “If you were here, you saw all of the old players that came back. They felt that win because they know the process and all we had to endure over time. It’s just the work ethic of the program. Everybody joining in and believing and trusting each other.”

When asked what he told his team in the huddle when it was trailing, Jackson said he simply reminded the team of who they were.

“I told them to relax and depend on the things that we do all the time,” Jackson shared. “I told them that I trust them and that if they go out there and do the things that we do everyday in practice and believe in themselves and stay true then good things were going to happen. Through all of the mistakes and everything I kept telling them we are going to win the game. They knew I believed in them and they believed in me... We were late coming out of the dressing room because I told my kids that it was going to come down to who had the toughest bench. I told Takari Glover she is going to have to represent and come out and make a play. We designed a defense, got the trap and she made a play. It just comes down to everybody believing their role and playing their role.

Jackson said his team was focused on getting a one-point lead in the last three minutes because it believes it will win every game when they are able to do so.

The Lady Cardinals defeated Genoa Central to open the tournament and then defeated conference rival Magnolia in the second round. The Lady Cardinals only won 10 games last season and have surpassed that mark with a 12-3 record so far.

“I wanna thank everyone for all of the support,” Jackson said. “From the administrators to the school board, every office in every building in the district, all of the fans in the community for supporting us. They were with us through all of the struggles and now we are reaping the benefits from all the hard work. Also, our 6-9th grade girls were in the stands cheering us on. It just really shows the program is heading in the right direction.

The Camden Fairview Cardinals may have let a second round loss beat them twice when it failed to win the consolation prize against Magnolia on Championship night. The Cardinals defeated Bearden in round one setting up a rematch with Warren - a team it had defeated by 30 points earlier in December. However, the Cardinals struggled from the second quarter on and came close to knotting the game late before ultimately losing 63-58. The following night, a couple of players in the rotation did not dress out as the Cardinals battled hard with a short bench before falling in defeat.

The Bearden Bears defeated the Harmony Grove Hornets 75-68 in a fast-paced exciting game. H.G’s Xaylon Falls led all scorers with 30 points in the contest.