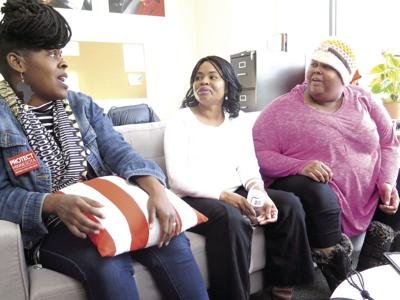 CAMDEN — MINNEAPOLIS (AP) — Ayolanda Evans heard a rush of loud, sharp pops cut across her north Minneapolis neighborhood recently. It was 8 a.m. on a Saturday.

She bolted from her bed and ran downstairs to find her 8-year-old son, who thought it was just fireworks. Evans, 38, who works for the anti-gun violence group Protect Minnesota, knew better.

“It sounded like right in front of the house.”

Hoping to insulate her son a little longer from the fear of gun violence, Evans didn’t want to tell him that several bullets had struck a car on the street outside.

Gunfire, though, is a reality that she and other African-American women in Minneapolis must deal with far too often.

An MPR News analysis of Minneapolis shootings from January 2016 through mid-December 2018 found 89 African-American females — including three girls aged 17 and younger — were wounded by people with guns.

Seven African-American women died as a result of being shot.

It’s a rate of gun violence higher than that for women of all other racial or ethnic groups.

That rate is also higher than for white men.

Even when the bullets don’t hit them, Evans and other women say the roles they play as mothers and caregivers place a greater burden on them than people realize.

Evans and two other African-American women agreed to share their experiences of gun violence. They said they’ve known and loved people who have been shot and killed, and they emphasized the role black women must play in ending gun violence.

By talking openly about what they’ve seen, they hope to open a window on the damage it creates for women even when the bullets miss them.

Besides the recent incident, Evans said three bullets struck her home two years ago while she and her husband and children were inside.

No one was hit, and Evans said her children slept through the impact.

But one bullet struck her bedroom wall and knocked plaster into her sleeping husband’s face.

She couldn’t help but think of Terrell Mayes Jr., the 3-year-old boy killed in 2011 when a bullet smashed through his north Minneapolis home.

African-American women are sometimes innocent bystanders caught in the crossfire.

In May 2016, Birdell Beeks, a 58-year-old grandmother was killed while she sat in her vehicle near an intersection in north Minneapolis. The convicted killer, Joshua Ezeka, was trying to hit someone else.

Kenya McKnight recalled a night 25 years ago in Minneapolis when an ex-boyfriend who had physically assaulted her during their relationship pulled a gun on her. She was 17.

“And he’s laughing,” she remembered.

McKnight was lucky that day. Her ex did not pull the trigger.

McKnight, 42, was raised on the city’s north side where she became intimately familiar with a violent gang feud in the mid to late 1990s that pushed the city’s homicide numbers higher than they’d ever been before.

“And I had friends on both sides of that. And a lot of us females were in the middle.”

McKnight and other young women she knew dated guys in those gangs.

And sometimes, that brought the young women too close to the action.

“I have female friends who’ve been shot,” said McKnight.

“I’ve dated guys in gangs. I know what that’s like when a car rolls up on the side of you and pulls out guns.”

Proximity to violent behavior and firearms are key factors in the rate of gun violence victimization of black women, said Sasha Cotton, who heads the city of Minneapolis’ Group Violence Intervention program.

Because African-American men, she said, are often the targets or perpetrators of gun violence, “their partners, their families, their community members are going to also have increased risk for being victims and perpetrators of that same violence, just by sheer proximity.”

While women are sometimes active participants in gang or group violence, they are more likely to be victims of abuse, said Cotton.

Minneapolis police data don’t indicate how many African-American women who survived shootings in Minneapolis were victims of domestic violence.

An analysis of national homicide data collected between 2003 and 2014 by the Centers for Disease Control and Prevention determined that non-Hispanic black women had the highest rate of intimate partner homicide, followed by Native American women.

The CDC reports that nearly 60 percent of black women killed by their partners were shot to death.

But those numbers don’t adequately illustrate how the illegal use of firearms has affected African American women in Minneapolis.

By the time she was 11, Charisma Smith had already seen two people shot and killed in front of her. Smith, 38, grew up in a Chicago public housing project where she said gunplay was common.

“I do remember one time where, and I don’t think that person died, but a person was shot,” said Smith.

“We dropped. And then we got right up and finished playing, once the gunshots stopped. I think I was 11.”

And while the gunshots didn’t fly with as much frequency in her new neighborhood as she faced in Chicago, there was still a similar feel.

“I was here for maybe a week and I was going over here to what they were calling ‘the murder station,’ over here on Lyndale and Broadway,” said Smith.

“As soon as I got off the bus, they were shooting over at the murder station and I was like, ‘Oh, OK. They do do that up here.’”

Smith was referring to a north Minneapolis gas station located near an intersection that, most recently, was the site of a Dec. 10, 2018 shooting which injured three, including a 14-year-old boy.

McKnight, Smith and Evans say there are ways to stop the violence and that black women can and do play a large part in finding solutions.

“It comes down to the choices we make as women and the type of people we choose to deal with,” said McKnight, who is the president and founder of the Black Women’s Wealth Alliance, a group which helps African-American women become financially independent through home and business ownership.

“We have to take our time to investigate who these people are and how they function before we allow them in our households and in our lives,” she added, “because they can and do influence not only us in the culture of violence, but our children.”

Men have a duty to hold themselves and other men accountable for their actions, she said.

Smith said she grew up with family members who were responsible gun owners and some who were not.

people taught about gun safety and the laws that dictate when a person can use a gun in self-defense.

McKnight added that she’d like to see more black teenagers learn CPR or become lifeguards so they can learn how to save lives.

Evans said she once considered buying a gun to protect her family after their home was burglarized several years ago.

She and the other women, though, see gun violence as a symptom of an oppressive system that delivers more harm than protection.

While the community must work to ease gun violence, Evans said lawmakers need to figure out how to stop the flow of guns into neighborhoods in the first place.