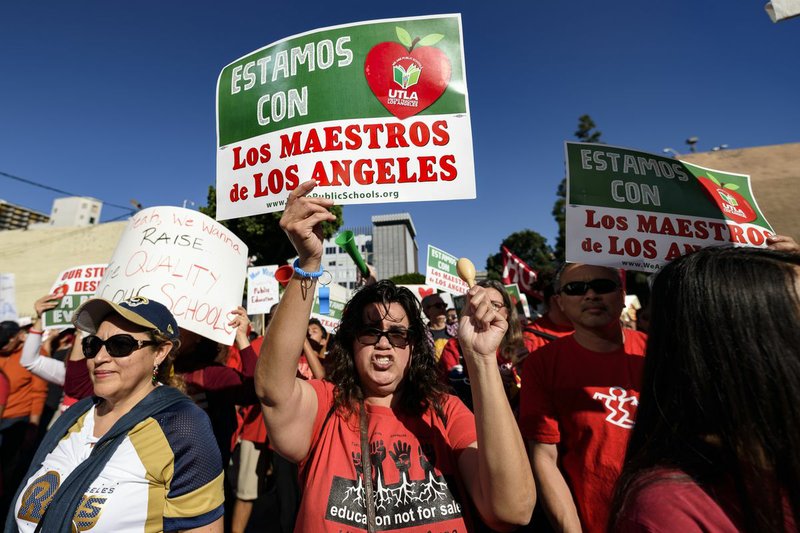 CAMDEN — LOS ANGELES (AP) — Tens of thousands of Los Angeles teachers went on strike Monday for the first time in three decades after contract negotiations failed in the nation’s second-largest school district, but schools stayed open with the help of substitutes and district officials said students were learning.

Educators and parents wearing ponchos and rain boots and carrying umbrellas gathered downtown to march from City Hall to district headquarters in the pouring rain, pressing for higher pay and smaller class sizes that the district says could bankrupt the school system with 640,000 students.

“Students, we are striking for you,” teachers union President Alex Caputo-Pearl told a cheering crowd.

Teachers aim to build on the momentum of successful walkouts nationwide, which launched last year in conservative states and now have moved to the more union-friendly West Coast. But unlike those strikes that shut down many schools and forced parents to find other care for their kids, all 1,240 K-12 schools in the Los Angeles Unified School District were open.

Bus service was normal, breakfast and lunches were being served, and “students are safe and learning,” Superintendent Austin Beutner said at a press conference.

The district has hired hundreds of substitutes to replace educators and staff members who left for picket lines, a move that the teachers union has called irresponsible.

Leighton Milton, a 21-year district veteran who teaches at Hollywood High, said he’s had as many as 55 students in one class and now has one with 42.

“It’s really hard to connect and to deal with 50 people,” he said as he headed to the march.

Months of talks between United Teachers Los Angeles, which has 35,000 members, and the district have ended without a deal. Beutner said the district is committed to resolving the contract negotiation as soon as possible and urged the union to resume bargaining.

“We made our last proposal to UTLA on Friday which was rejected. They walked away from bargaining,” he said, adding that he was talking with the governor, mayor and the state superintendent of public education but didn’t release details.

The union rejected that district offer to hire nearly 1,200 teachers, counselors, nurses and librarians and reduce class sizes by two students. It also included a previously proposed a 6 percent raise over the first two years of a three-year contract. The union wants a 6.5 percent hike at the start of a two-year contract.

Teachers earn between $44,000 and $86,000 a year depending on their education and experience, according to the Los Angeles County Office of Education. The district says the average teacher salary is $75,000, which reflects an older, more experienced workforce.

The district says the demands run up against an expected half-billion-dollar deficit this budget year and billions that are obligated for pension payments and health coverage for retired teachers.

The union argues that the district is hoarding reserves of $1.8 billion that could be used to fund the pay and staffing hikes.