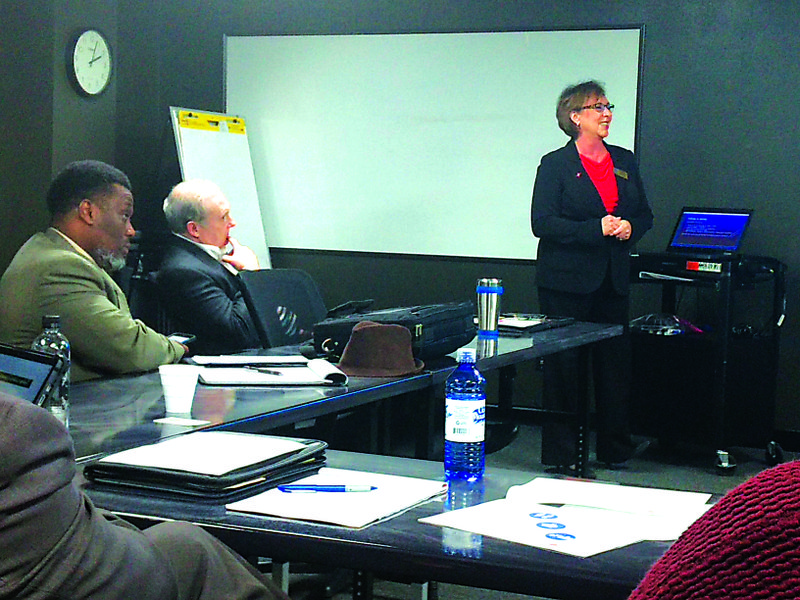 Deidre Smith, Director of the Arkansas Waterways Commission led a strategic planning meeting concerning the Ouachita River at the offices of the Ouachita Partnership for Economic Development.

“I am so excited to be in Camden Arkansas today,” Smith said. “I’ve been wanting to do this for quite some time. Fortunately I called Mayor Lott and he said come on down. We need to reinvigorate the Ouachita River navigation system and try to get some economic development here.”

According to the Arkansas Waterways commission website: “The Arkansas Waterways Commission is the sole state agency responsible for developing, promoting and protecting waterborne transportation in Arkansas. The Commission also promotes economic development for ports on the five commercially navigable rivers of the state: The Arkansas, Mississippi, Ouachita, Red, and White Rivers. Please click the links on the left for more information.”

Presentations were heard from Skip Martin of the Vicksburg District United States Army Corps of Engineers on the the Ouachita River History and the locks and dams.

A 337-mile-long “Ouachita-Black Rivers Navigation Project” began in 1902, to create a navigable waterway from Camden, Arkansas to Jonesville, Louisiana, and when completed in 1924 included six locks and dams that were 84 feet wide and 600 feet in length.

Martin said the two lock locations in Arkansas, Felsenthal and Thatcher were both constructed in 1984.

Bryan Scoggins of the Arkansas Economic Development Commission gave a short presentation on the Opportunity Zone regulations set up by the federal government. Two of the zones are in Camden and offer a deferrment on capital gains tax in regards to investing in businesses. Scoggins did admit that a lot of the details on the zones still have to be worked out by the IRS.

Smith indicated an interest in what materials could be transported on the river and said that the Union Pacific railroad located in town could be a huge asset paired with the river.

Though barge traffic has slowed considerably from the heyday of the river. The idea was tossed around in the meeting that river traffic could connect with the SouthArk Intermodal Park to support transportation.

Ouachita County Judge Robert McAdoo stated: “Right now as the river sits the barge trafficking is not what we can really push to get ORVA to stimulate the Corps of Engineers. What we really need push is the other uses of the river as our biggest seller, as far as industry, public water, the recreation aspect. If we get a little barge traffic in the county, there’s the possibility that it may come up north to the city.”