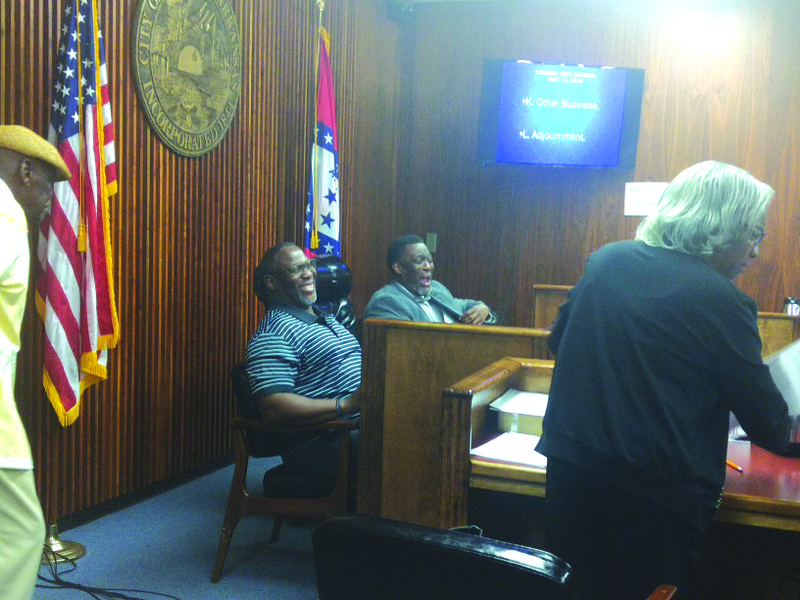 CAMDEN — A representative from Entergy gave the Camden City Council a brief explanation of his company’s work during power outages in June, while members of Unity in the Community sought donations during Tuesday night’s Camden City Council meeting for the group’s upcoming National Night Out event.

Chris Wasson, customer service representative for Entergy, addressed the Board of Aldermen about his company’s actions after the storms on June 19.

“Our process when we have widespread damage, such as what we have on the 19th, we first address hospitals and any kind of emergency-providing facilities, and that includes police stations our fire departments, things like that,” Wasson said. “Those are our first priority. Then we go on a case by case scenario, we work the highest customer case count first.”

Wasson said that after the power outages, 160 additional linemen from Louisiana, Texas and Mississippi were brought in, with 120 of those being assigned to Camden.

“That’s 75% of the people we brought in, we sent them here, because that’s where the damage is,” Wasson said.

He also said that 40-50 cherry pickers were brought in to assist with tree trimming.

Wasson thanked the city and its people for the warm reception the Entergy linemen received, and praised Camden’s restaurants, which he said were especially accommodating given the large number of workers they had to serve the area.

Doc Bryce and Rashel Williams of Unity in the Community approached the board about seeking a donation for the Aug. 6 National Night Out, which is held annually in communities across the United States, U.S. territories, and military bases world-wide on the first Tuesday in August- with the exception of Texas and a few other select areas, which hold the event on the first Tuesday in October. The event helps spread goodwill between the community and first responders.

Williams said that grants have funded most of the event in the past, but now those funds are not available. The group is seeking $500 to pay for things like food and entertainment.

Mayor Julian Lott said that while nothing could be officially done that night, members of the council themselves may be willing to donate to the organization personally.

Also during audience participation, Council Member Joe Askew thanked the Public Works Department for its quick actions after the storms and their rapid response in getting Carnes Park ready for the Juneteenth Celebration. He also praised the Juneteenth Committee for an event that he said is growing bigger every year.

During the mayor’s report, Lott invited the public to attend a public information meeting at 6 p.m. Thursday at the Charles O. Ross Center. The event will partially focus on how to handle traffic stops, but will also have members of the city’s code enforcement and the fire department there to answer questions from the public. He also invited people to show up on July 30 and August 1 to attend focus groups held by the Community Development Institute of the UCA. The groups will meet at 1:45 p.m. at First United Methodist Church and will focus on a plan of action for the city.

• Resolution No. 28-19, a resolution confirming the re-appointment of Terry Thornhill and Manpreet Kang to the Planning Commission passed unanimously

• Resolution No. 29-19, a resolution authorizing the sale of city-owned property located at 561 Pierce St. to the highest bidder at public auction passed unanimously. No date was set on the auction, but the minimum bid will start at $2,500.

• Resolution No. 30-19, a resolution appropriating funds for the purchase of garbage carts; amending the budget for 2019; and for other purposes passed unanimously. The funds were left over from the purchase of a garbage truck last month.