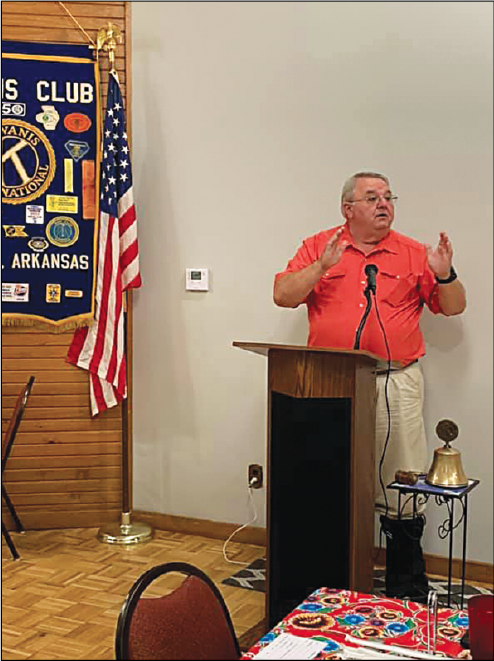 McAdoo explained that the storm system moved into Ouachita County from the Troy community on the west side of the county. The storm had a wind variance of 65 to 80 mph. It swept across Highway 376, U.S. 79, Ouachita 18, Old Wire Road, Mt. Holly road and Smackover road before exiting Ouachita County and heading toward Calhoun. McAdoo said that several residents reported swirling and that a conversation with the National Weather Service informed him that the swirling was because of the effects from a bow echo.

McAdoo shared that the main thrust of the corridor was across Troy Road, and he added that the Cherokee Subdivision was hit by straight-line winds.

“It was devastating,” McAdoo shared. “I told the guy (from NWS), ‘Man, you can call it what you want to, but whatever it was, man, it was nasty.’”

McAdoo shared that he had spoken with the Miller County and Little River County judges after the storm moved through those areas. Both judges reported having between 8-10 trees down in each county before the storm came into Ouachita County.

While the brunt of the storm was thrust on Ouachita County, McAdoo credited the area for its response. He touted the county residents for going out and helping almost immediately after the most severe part of the storm, and said that he saw a skidder and a group of people working to remove a 100-year-old oak tree from across Old Wire Road minutes after the storm.

“It always amazes me about Camden and Ouachita County folks,” McAdoo shared. “It’s kinda like we are used to it a little bit. I hate to say it that way, but we’re kinda used to it ‘cause residents fired up the chainsaws and got out the tractors and they went to work on helping and boy, that’s much appreciated.”

McAdoo also talked about the relief process after a major storm. He explained that he, as county judge, he has to make a verbal declaration which “starts the ball turning.” Then he has to submit a written declaration within five days of the storm which consists of damage estimates. He said that after a storm like the one in June where damages are still being discovered, it’s difficult to make those estimates accurate.

McAdoo also talked about the $102,000 threshold that the county has in regards to damages and that the county exceeded that which allows for state help. However, the state has a $4.3M threshold in order to receive federal help and that it doesn’t look as if the county will qualify.

He said that the majority of the damages were “utilities and public assistance.” Ouachita Electric had $850,000 in Ouachita County damages alone. There were damages in Dallas, Union, Bragg, Calhoun and Drew County as well. The Arkansas Department of Emergency Management has also been in the county surveying and compiling numbers from damages.

McAdoo said that the flooding across the state during the time the bow echo hit Ouachita County made the situation more problematic.

“Our storm came on the hills of one of the most severe flooding events that’s happened in the state in a long, long time,” McAdoo said. “So the total attention was on the flooding and aftermath of flooding… Our storm did not get to the top-priority level because there was so much devastation from the flood.”

The judge stated that because he doesn’t feel the damages will reach the $4.3M threshold for federal relief, that means the burden of the utility bills will fall on the customers.

“I know this with Ouachita Electric with all of its solar endeavors, one of the primary goals was to try to produce power at a lower cost so it could pass on some of its savings to its customers,” McAdoo stated. “Well, with this being here and the damages they had, it’s going to put a bend on things.”

McAdoo also spoke about the relationship between the county and Ouachita Electric Cooperative Corporation. He said that he spoke with OECC General Manager Mark Cayce the day after the storm and informed him that there were still 40-50 trees on the road with power lines wrapped in them. Because of this, the county was unable to remove the trees for safety concerns. Cayce sent a bucket truck along with OECC workers - along with the county workers - to make sure the lines were safe so the trees could be removed. Afterwards, the “fix it” crew would go in and repair the lines.

“Because of our actions on that Friday, rural Ouachita County got their power back on probably two or three days earlier than they would’ve if we wouldn’t have gone through there and did that,” McAdoo concluded. “It worked out so well. We have such a great relationship with Ouachita Electric, and Mr. Cayce is always open for conversation and brainstorming.”