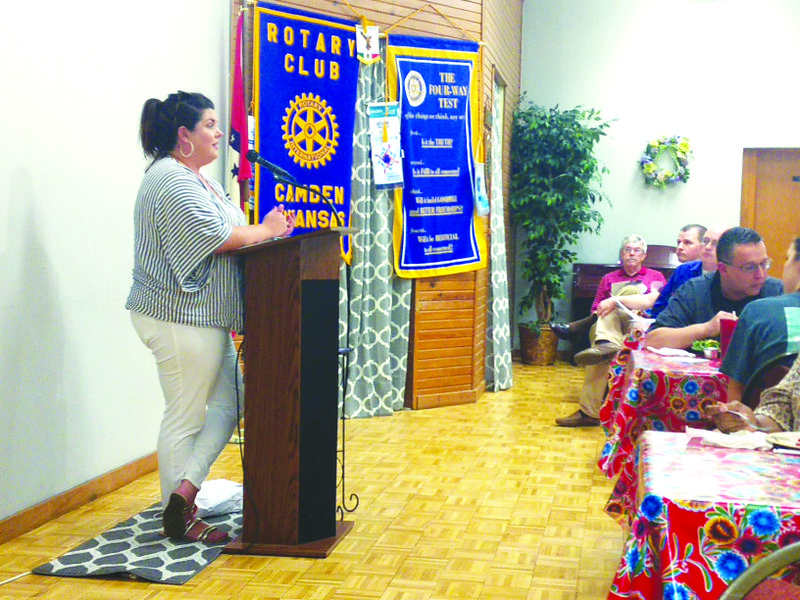 Julia Nipper, Hospice Specialist, with Kindred Hospice spoke with the Camden Lions Club at the group’s meeting at Catherine’s Bistro about some of the services and the myths and facts surrounding end of life care.

“The main thought we come across is ‘Somebody is about to die’ and that’s not necessarily the case,” Nipper said.

She said that in most cases when people go on hospice care they typically live longer than a person with the same disease who does not receive hospice care.

“If you know somebody on hospice and they have cancer, somebody with that same disease will probably die faster than the one on hospice,” she said.

A pamphlet provided by Nipper goes into some of the myths and facts of hospice care such as:

Fact: Hospice is about quality of life and hope preservation. Hospice patients are

encouraged to live life to the fullest.

Myth: Suffering is a part of hospice care because traditional medicine is no longer allowed.

Fact: Managing pain and symptoms is one of the key goals in hospice care. Medications an used as needed to control both.

Myth: Hospice is a place.

Fact: The majority of care is administered in the patient’s familiar surroundings such as their home, nursing home or assisted living facility

Myth: Hospice care is only for cancer patients.

Fact: Hospice care is for any patient with a terminal illness, with a life expectancy of 6 months or less which can include end-stage heart disease, COPD, Alzheimer’s disease ALS (Lou Gehrig’s disease) and AIDS.

Myth: Only a doctor can refer a patient for hospice care.

Fact: Actually, anyone can make a referral. It can be a physician order, certification of terminal illness or a prognosis by two physicians. The information will be taken and the patient’s doctor will be contacted to gain permission to assess the patient for eligibility.

Myth: If you choose hospice care you can never see your family physician again.

Fact: The Medicare hospice benefit covers the care of a hospice patient as long as the patient considered terminally ill and has life expectancy of six months or less.

She said that the process begins once there is a referral, either from someone’s family or their primary care physician.

However, as Nipper explained, hospice is not a “death sentence,”

“We’ve discharged three in the last month. Either that they’ve improved enough that they are almost getting better or they stayed at a flat rate,” Nipper said.