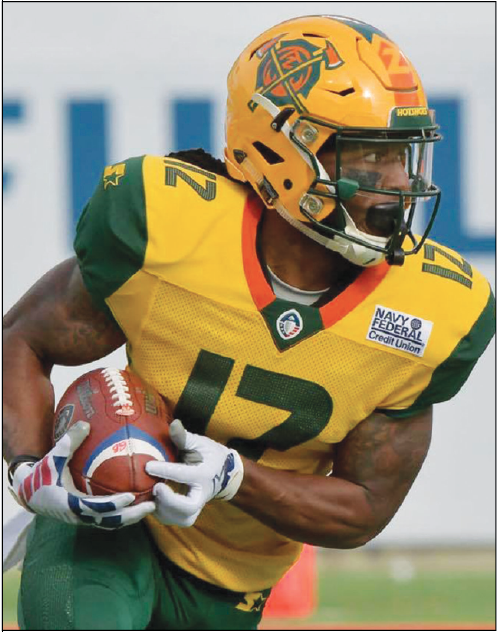 Holliman recently played professional football for the Arizona Hotshots in the Alliance of America Football League. However, the league suspended its operations abruptly - leaving many of its coaches, players and organizations without jobs.

Holliman shared the news on his Facebook page earlier this week, along with a photo of the invite that he received from XFL Director of Player Personnel, Eric Galko. In the post, Holliman detailed what has been a journey of peeks and valleys. He shared that he would question God and himself sometimes and wonder if he was good enough to reach his “ultimate destination.”

When he played for the Hotshots, he was one in only four of the 52 players on the roster to have never played in the NFL. He shared that several NFL teams had show interest in him, but none of them had brought him on board just yet. The last few months have been about learning to trust God Holliman explained.

“On this journey you get the urge to question God sometimes like, ‘why am I not at the ultimate destination’ and you want to give up,” Holliman stated in his post.

“Truth be told, I always knew God was in control but deep inside I felt like I had more control than I really did in the past. All the hard work I put in and the numbers I put up made me feel like it was enough. In the AAF 48 out of my 52 teammates had already been in the NFL for years, I was just 1 of 4 that hasn’t yet. Before I got there, I questioned if I was good enough to play professional ball and I quickly noticed that wasn’t the case. It’s all about opportunities. I made the best of my last one. I realized my future isn’t in my hands over these past months no matter how bad I wanted it to be and after hearing from several NFL teams the past few months saying they could potentially pull the trigger I got eager and impatient Bc it hasn’t happen yet. It’s like I’m knocking at the door each time. Literally one step away from the NFL but I had to catch myself and just literally trust God. He’s in control. He’s blessed me with another opportunity to showcase my talents on a professional level again and I’m thankful! I always feel the need to share a small testimony to help someone else out. No matter how much you do personally, God has the last say so. Trust in the Lord with all your heart and lean not unto your own understanding. In all your ways acknowledge him and he shall direct your path. Proverbs 3:5-6”

Holliman is a graduate of Camden Fairview High School where he was a part of the 2012 5A State Football Champions. He went on to play college ball at Missouri State and garnered several academic and athletic accolades despite battling through injuries.

After graduating, Holliman suited up for the Hotshots and made several eye-catching plays during the league’s short tenure.

The XFL was founded by WWE CEO Vince McMahon. It is expected to began airing on television in 2020 after a 19 year hiatus.

The Summer Showcase is held in front of XFL league and team personnel and coaches.