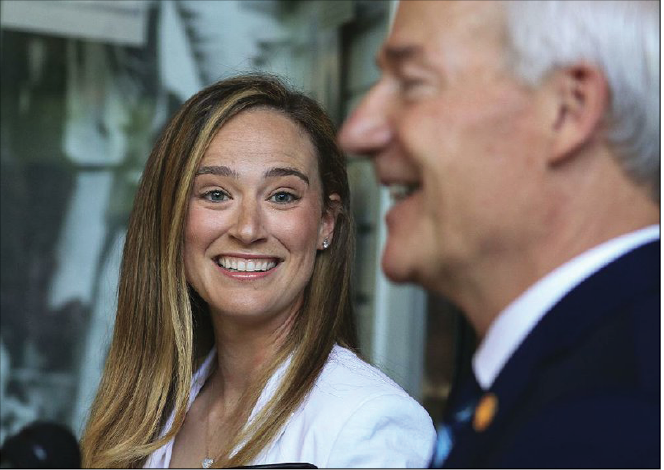 Gov. Asa Hutchinson on Wednesday appointed a Little Rock woman to a seven-year term on the Arkansas Game and Fish Commission.

Anne Marie Doramus, 27, is the youngest person to serve on the agency’s governing panel, and the first woman to be appointed to serve a full term.

Pat Peacock of Stuttgart served in 1994-95 to complete the term of Maurice Lewis.

Doramus is the vice president of sales at Arkansas Bolt Co. in Little Rock and holds a bachelor’s degree in journalism and advertising from the University of Arkansas, Fayetteville. She attended high school at Episcopal Collegiate Academy.

Doramus will resign from the Game and Fish Foundation, according to Deke Whitbeck, the foundation’s president.

Doramus said she learned to love duck hunting as a preschooler when she accompanied her father and three brothers on hunting trips.

“Duck hunting is my passion,” she said. “One of the hardest things was when I went to college in Fayetteville and I couldn’t just up and go to the farm and go duck hunting. When I graduated I said, ‘I’m not missing another weekend.’ I hate to say this, but I missed some friends’ bachelorette parties because of duck season.”

Hutchinson announced the appointment before a large crowd at the Witt Stephens Central Arkansas Nature Center in Little Rock.

“When I hold a news conference, not this many people come to see it,” Hutchinson said. “They are here today because of the excitement of this moment.”

Hutchinson said Doramus has the three qualities he looks for in a Game and Fish Commission candidate: a deep love for hunting and fishing, a commitment to conservation and a unique perspective.

“You’re young, you’re a woman, you’re a hunter and fisherman,” Hutchinson said. “You bring all the things I value to a commission. The Game and Fish Commission faces some challenges today, and I believe your perspective will add to the solutions, and that will be important that you all work through the coming years.”

The most urgent challenge is the steady decline in the number of hunting and fishing licenses the commission sells. It sold 10% fewer resident hunting licenses in 2018-19 than in the previous year, and 9% fewer nonresident fishing licenses.

Solutions are multifaceted, Doramus said, noting that the commission must aggressively recruit new sportsmen, retain existing sportsmen and reactivate sportsmen who have stopped hunting and fishing. Success, she said, will require innovative uses of technology, social media and other nontraditional media.

“There are a lot of single moms, a lot of single dads,” Doramus said. “A lot of people never had an opportunity to go hunting or fishing. They’re not exactly the easiest sports to get into. Who’s going to teach them? We have the resources to help them learn.”

The commission also must engage existing hunters and anglers more actively and more innovatively, Doramus said. She said an automatic renewal system for license holders will eliminate noncompliance issues when sportsmen forget to renew their licenses. Also, she said, the commission soon will digitize its hunting and fishing regulations for easy reference afield.

Recruiting new hunters and anglers is the most difficult challenge, Doramus said.

“We have missed a generation. We really have,” Doramus said. “The world is ever-changing. Interests are different.”

“There are a few dicey items,” Doramus said. “I want to keep that conversation going.”

Doramus said she does not have a personal agenda to promote, but she does bring a lot of energy, a youthful perspective and an eagerness to engage with the public.

Anne Marie Doramus addresses the crowd Wednesday at the Witt Stephens Central Arkansas Nature Center in Little Rock after being appointed to the Arkansas Game and Fish Commission. More photos are available at arkansasonline.com/627commission/

Anne Marie Doramus addresses the crowd Wednesday at the Witt Stephens Central Arkansas Nature Center in Little Rock after being appointed to the Arkansas Game and Fish Commission. More photos are available at arkansasonline.com/627commission/

“I do hope to inspire people to go out and learn,” Doramus said. “A few years ago I didn’t know anything about fly fishing. I went to a Fly Fishing 101 event at the Ozark Angler, and it became one of my passions. I hope that people grab a hold of their goals.”

Although she will be only the second woman to serve on the commission, Doramus said she does not consider that to be a challenge. She said her youth might cause some to underestimate her, but she said the commission will benefit from her generation’s perspective.

“I didn’t expect this to come along at the time that it did, but the more I learned about it, the more I figured out that the time is now,” Doramus said.

“I’ve seen the governor hit some home runs, but I think he’s hit a grand slam this time,” said Reeves, who was appointed by former Gov. Mike Beebe. “Thank you, Governor, for a stellar appointment. I haven’t seen our commissioners this excited about anything compared to today.