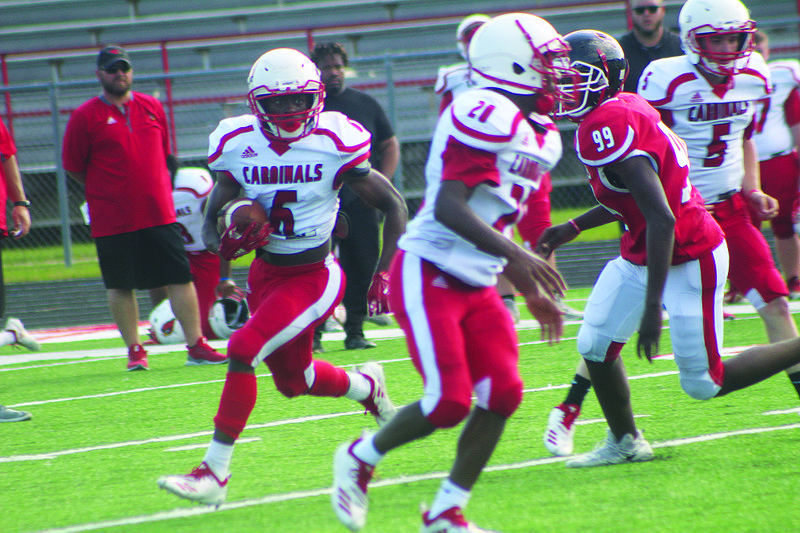 CAMDEN — In order for the Camden Fairview Cardinals (4-4, 3-2) to stay in the playoff conversation, it will have to do something it hasn’t done all year: Win a home conference

As the Cardinals will celebrate senior night, Hot Springs Head Coach Darrell Burnett will be celebrating homecoming. Burnett was the defensive coordinator for the Cardinals in 2012 - the year CF won the 5A State Championship. While this is his second year with the Trojans, it’s his first time back to Camden since 2013 when he was still on the home

Shortly after being hired, Burnett made a guarantee to The Sentinel-Record.

”We will bring the ‘T’ back. Trust me. That’s a guarantee on that

In his second season, he hasn’t disappointed. Not only are the Trojans tied for first place in conference but the team is only giving up 10 points a game in conference play. The Trojans are known for dialing up a lot of pressure on defense and creating chaos in the backfield even when its unable to get a

Stats haven’t indicated how good this Trojans team has been. Even last week, its offense only compiled 135 total yards in its win against Texarkana. However, the Trojans have been the most disciplined team in the league averaging less than 5 penalties per

The Cardinals still have a lot going in its favor. While the coaching staff went through several changes over the summer, Head Coach Jake Monden is in his fourth year with the program. Since Monden came to Camden, the Cardinals are 2-1 against the Trojans and have outscored H.S. 130-41. H.S. hasn’t scored against the Cardinals since 2016.

Another big advantage for the Cardinals is its depth. C.F. will be at full strength on Friday night with several reserve players having gotten some valuable time over the last couple of varsity games. The kicking game has vastly improved and the offensive line hasn’t allowed a sack in the last two weeks.

CF running back Erick Hall went over the 1,000 yard mark last week at Hope as the Cardinals were able to use 9 different ball carriers in the game. Quarterback Logan Robertson is completing over 50 percent of his passes and is nearing the 1,500 all purpose yardage mark while the receiving core has only had three drops over the last eight quarters of

Cardinals junior defensive end Matthew Pouncil garnered player of the week accolades with his performance last week for a CF defense that is just as dangerous as H.S.’s, only allowing 15 ppg in conference play and having tallied 21 turnovers on the season (9 fumbles and 12 interceptions) - twice as many as H.S.

The Cardinal offense is also clicking and is averaging 32 ppg in conference - third behind McClellan (39) and Lakeside (36).

Hot Springs offense has only averaged 12 points in its last two outings but has some witty and gritty student athletes on defense to make up the difference. 6’3, 180 junior linebacker Adrian Conway has seven sacks on the season and Devin Johnson is averaging 10 tackles a game (86 total.) Its offense is led by sophomore quarterback Isacc Shellor and junior running back Carlow Brewer.

In last year’s meeting, the Cardinals pounded Hot Springs, 57-0. CF went up 29-0 in the first quarter before leading 50-0 at the

The presentation of CF senior football, band cheerleaders and dance team student athletes will begin at 6:20 followed by the game at 7 p.m. The weather is predicted to be clear with a low of 35 degrees.