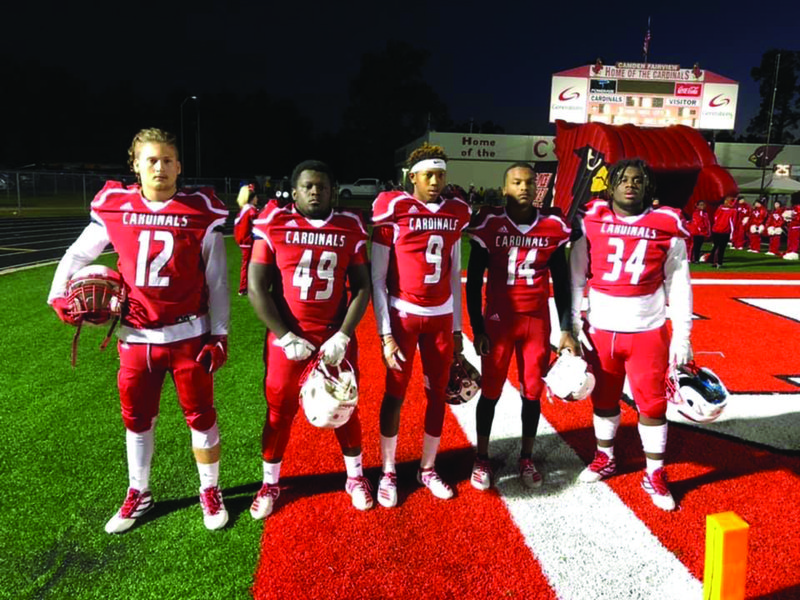 When the Camden Fairview Cardinals (5-4, 4-2) took the field against the Hot Springs Trojans (5-4, 4-2) Friday night, they knew what was at stake. Against all odds, the Cardinals were able to double up the previous front runners for the 5A south by winning 28-14.

Things didn't start the best for the Cardinals after Hot Springs quarterback Isaac Shellor found Malik Brewer over the middle for a 68 yard touchdown on the second play from scrimmage. The Trojans tacked on the field goal and took the early 7-0 lead.

The Cardinals offense was slow out of the gates when two penalties hindered its rhythm and they had to punt after three plays. The penalties wouldn't stop on offense as the Cardinal defense surrendered two first downs to the Trojans to help them move in to Cardinal territory. Things looked grave early as the Trojans appeared to be in total control.

Akin to the scene when Rocky lets Ivan Drago know he's in for a fight when he stuns him in the early rounds, C.F. defensive end Matthew Pouncil came up with an interception on a pass to the flat and raced its 64 yards to the house. William Boniello came in and sent the PAT through the uprights to tie the game with 7 minutes left in the first.

The Cardinal defense then settled in and forced a three and out on the Trojan's next possession. After a HS punt down to the Cardinal 47, the home team would find the end zone when a gimpy Erik Hall ran it in for a 10 yard touchdown on a six play drive. Boniello's PAT would again ring true as the Cardinals took the 14-0 lead with 11 minutes left before the half.

Both defenses would trade blows with the Trojans coming up with an interception and Eric Albert forcing a fumble that was recovered by a hard-hitting Amari Pace at the HS 26. The Cardinals threatened to score but ultimately turned the ball over on down's after the Trojans got away with what appeared to be a big no call on a defensive hold.

Things got interesting late in the half. After the Cardinal defense forced another punt, the Cardinal offense would drive inside Trojan territory. Facing a third and four, tough and gritty sophomore quarterback Logan Robertson picked up three yards before getting banged up and having to leave the game. EJ Gates came in to man the quarterback position, but a mishandled snap led to a fumble that was recovered by the Trojans.

HS, feeling the momentum, attempted the same play it scored on earlier. This time, C.F. safety Payton Byrd was there to come up with the interception. However, as Byrd's forward momentum was stopped and he appeared to have a knee either on the ground or on top of another player, HS ripped the ball from his hands and official rewarded the ball back to the Trojans with less than 30 seconds left. On the same drive, Shellor rolled right and fired in the end zone for an incomplete pass but the Trojans caught another break when officials called a late hit on the Cardinals. The Trojans set up for a field goal that would've been good if it wasn't for a well-timed, time out called by the Cardinals coaching staff just before the snap. When the Trojans attempted the kick again it fell short and the Cardinals held on to the 14-7 lead.

The third quarter would go by in a blur as CF's offense leaned on a ground attack. On its second offensive possession of the half, Gates would score a two yard touchdown. Then, knowing that the Trojans were winded, CF added a two-point conversion on another Gates run.

CF opened the fourth quarter with a 22-7 lead and the ball. After getting pushed behind the sticks inside its own 20 yard line, the Cardinals would fumble the ball back into the hands of the Trojans.

The home defense played valiantly on the short field but Trojans would find the end zone on a 17 yard pass to Carlos Brewer who had slipped behind a pressure-ramping Cardinal defense that actually tipped the ball to cut into the lead. The PAT was good but the Cardinals still led 22-14.

The Cardinals would punt on their next possession and the Trojans would get the ball back with plenty time to score.

Almost on cue, C.F.'s Amauryae Juniel would land a big hit on a HS ball carrier to cause a fumble with 6:58 left inside the Trojan's territory.

The Cardinals would run into a 4th and three with 3:28 left in the game when Gates got behind the offensive front that had blocked well all night and picked up the needed yardage over the left side. Kevin Tate would come in to push the ball down to the goal line before Jacoriae Brown would land the knockout blow with a one yard touchdown run with 1:21 left in the game. CF would go for two with its starting PAT holder Robertson out of the game but came up short.

The Cardinals would end the game with Byrd coming up with a stop on fourth down and the offence coming out in victory formation.

C.F. Head Coach Jake Monden talked about the resiliency of his team and how the season had made them stronger heading into the critical game against the Trojans. He shared that his team knows what it is capable of doing even when times haven't gone their way.

"You know, it's been a common denominator most the year with the way people score on us. It's gotta be a huge play," Monden said regarding HS's first two touchdowns. "We knew No. 6 was dangerous and that's been the guy they've been connecting with all year long. And maybe we're a little amped up, reaching a little bit and he gets by us. But there was absolutely no point in time that we said, 'okay, we're in trouble.' We know exactly who we are. Second time they scored we turned it over inside our own 20, we get them to fourth down and the kid makes an amazing catch on a screen that we actually tipped. It just goes back to the work that my coaches put in, the work that these kids put in on a daily basis and what they're believing in. This has been a fun team to coach this year. The sad thing is we're a four game loser this year and its been by a total of 11 points. More than anything, this team is 4 or 5 plays away from being 9-0 right now. We know that. We see that. These kids see that. Going back to the resiliency side of things, man these kids don't care how we win long as we do it. We don't have a guy out there that cares about his stats or cares about his touches. We don't have a guy out there that just cares about sacking or getting interceptions. It's just a team effort all the time. this has been more of a family inside of this locker room in this field house than its ever been."

Those "four or five plays" Monden refers to were redeemed against Hot Springs. Plays like Byrd's punt being played perfectly by Justin Scott at the HS 1-yard line in the first half or coming up with a key fourth down conversion to lengthen a drive was a correction from the Texarkana game. CF being able to punch it in from the two yard line, not once but on two occasions instead of being hit with a penalty or loss yardage was a lesson from the Magnolia loss. The running game being able to continue even after losing leading rusher Erik Hall to an ankle injury was something the Cardinals were unable to do in the loss against El Dorado. The defense recovering three fumbles and scoring on an interception would've led to a win at Joe T. Also, CF went 2/2 on PATs against the Trojans and are 12/14 on PAT's in its last three games.

The fact CF was able to make those "four or five plays" against its toughest opponent of the season and pick up its first home conference win under pressure, shows the Cardinals are trending in the right direction when its needing to the most.

Monden also praised Gates and Clemmer for being able to play both sides of the ball along with Kyron Kidd and Jamario Williams. He also talked about how bad he wanted to get all of the seniors in the game but how seeing the seniors that didn't get to play happy made him feel better.

"Gates has grown up so much over these last three years," Monden said. "He just wants to do whatever he can to help his team. You saw him and Clemmer play both ways all night long. They're playing in the place of a couple of guys that usually play a lot. Just goes back to those kids and how they were raised and what they care about. That's the great thing right now. We have seniors on that sideline and I had seniors that didn't get in tonight. I feel terrible about it but those kids don't feel so bad about it because our team won. It was a whirlwind tonight we knew it would be a tough game. That team is 4-1 in conference lost a game a couple of weeks back on the road in a tight one. Hats off to Coach (Darrell) Burnett and Hot Springs. That group has gotten better and we saw it coming because all those kids he played a year ago we knew they were coming back. It's similar to what our team is right now. So future's bright, next week's bright and hopefully we're going to play as long as we can play this year."

The running back stable of Reshard Clardy, Brown, Hall and Tate combined with Gates and Brandon Copeland to rush for 222 yards. Kyron Kidd ended the night with three sacks along with Pouncil being credited for two. Pace and Albert were stellar throughout the night. Austin Stone wore the No. 12 in honor of his cousin Tyler Kelly to commemorate senior night and was also credited with a tackle for a loss.