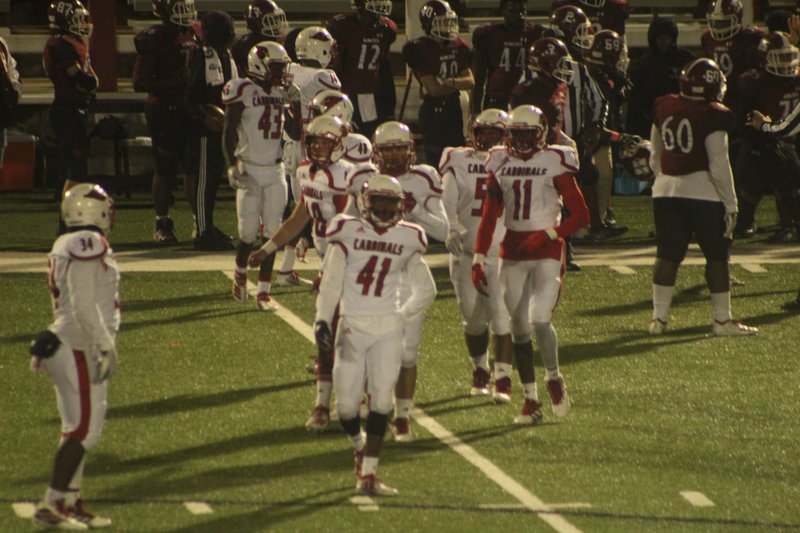 CAMDEN — Despite how complicated the playoff picture is in the South, its pretty simple for the Camden Fairview Cardinals (5-4, 4-2): Win and you’re in.

In all scenarios, if CF can win Friday night then the Cardinals are guaranteed a spot in the 5A State Playoffs.

But, CF’s opponent is way better than their record indicates.

The Little Rock McClellan Crimson Lions (4-5, 2-4) are a formidable foe with a championship pedigree under the direction of its head coach Maurice Moody. While the Lions are all but out of the playoffs, they will be competing in its last football game before combining with Little Rock Fair next year and moving to the 7A Classification. The fact that the game will be senior night for McClellan adds more fuel to the fire.

The Cardinals history with McClellan spans back to the 90’s when 5A was the biggest classification in Arkansas High School football. When they shared the same conference in the 90’s, the teams played three times and the games were decided by a total of four points. In fact, the last time C.F. beat McClellan was in a 35-34 double overtime game in Little Rock back in 1998.

The two teams met on the gridiron for the first time in 19 years last year, with McClellan dominating the Cardinals, 34-6.

CF enters Friday night’s game a little banged up after a big time win against Hot Springs Trojans (28-14.) In that game, starting quarterback Logan Robertson and starting running back Erik Hall left with injuries in the first half. Amari Pace, Payton Byrd, Jamario Williams and Nick Burdue all played through nagging injuries during the game. While each player is anticipated to be back in action by Friday, nothing is for certain.

The Cardinals will play against its second sophomore quarterback in a row when it lines up against the speedy Joshua Brown. Last week, Brown got loose for an 82 yard touchdown run and only completed one pass which was a 50 bomb that would set up a touchdown.

The McClellan defense held Lakeside in check until late, only allowing a total of 50 yards at half time.

The 5A South can very well end up in a five way tie for first place with one of the co-conference champions missing the playoffs all together. In the event, CF, Hot Springs, Lakeside, Texarkana and Magnolia all win on Friday, each team will be 5-2 in conference. This would result in those teams forming what is called a “mini-conference” according to Page 65 of the the Arkansas Activities Association’s 2018-2019 handbook. The handbook states the following:

In the event the 5A South ends up being a mini conference, CF has the biggest winning margin among the teams in five way tie (19). Texarkana has 9 tie breaker points and Magnolia has 4. Hot Springs (3) and Lakeside (1) are the only teams remaining in the possible mini conference that hasn’t played yet with the margin of victory playing a part. However, it’s important to note that the most points either HS or Lakeside can use is 13 which would still leave CF in the lead in terms of tie breaker points.

Based on these regulations, these are a few scenarios that could play out on Friday night.

The best case scenario for the Cardinals is a win against McClellan and a Lakeside loss at Hot Springs. If this was to occur, the Cardinals would earn the No. 1 seed in the five way tie thanks to its tie breaker points over Lakeside. It would also help the Cardinals if a major upset of De Queen over Texarkana or Hope over Magnolia happened.

If C.F. loses Friday - even if its by one point - and Hot Springs defeats Lakeside with Texarkana and Magnolia winning their last games of the season, CF would drop to a 4-3 record and miss the playoffs with Lakeside, Hot Springs, Magnolia and Texarkana all being 5-2.

If Lakeside wins then the Rams will win the 5A South title even with a C.F. win. That would lead CF to a four-way tie for second despite having a head-to-head win over Lakeside and tie breaker points would come in to consideration with the margin of victory in the Lakeside/Hot Springs game determining which team falls where. While CF would be in the tie for second, it would get the fourth seed in this scenario because of its head to head losses to Texarkana and Magnolia. Hot Springs would drop out of the mini conference with the third loss so CF’s head-to-head win over the Trojans wouldn’t matter.

If CF loses Friday, Lakeside wins, and Magnolia and Texarkana wins, CF will still have a shot at getting in the playoffs thanks to holding the maximum of 13 points over Hot Springs who would also sit at 4-3.

The 5A South will match up with the 5A Central conference which is led by the undefeated and defending state champion Little Rock Christian Warriors. The 5A Central is currently seeded as such: