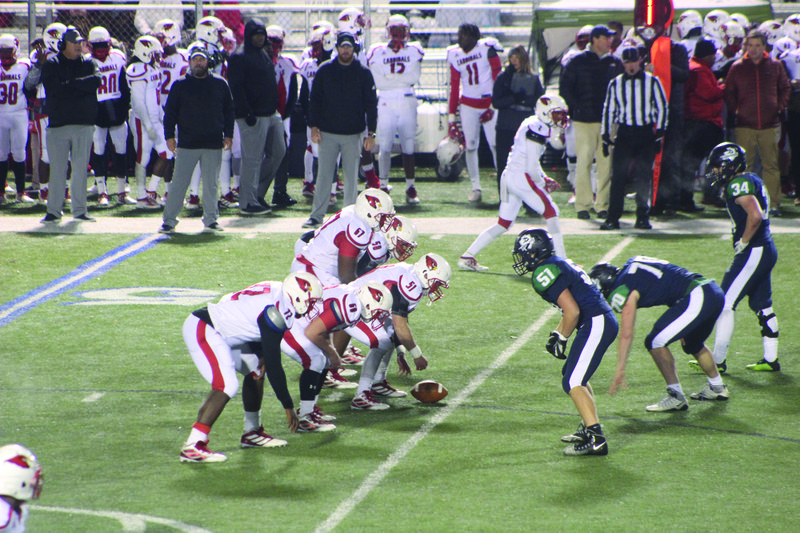 The Camden Fairview Cardinals 2019 football season came to a close against the No. 1 ranked and defending 5A State Champion Little Rock Christian Warriors by a score of 36-14 on Friday night.

With the odds stacked heavily against them by being the No. 4 seed from a 5A South Conference that only advanced one team into the second round, and being picked to lose by 25 points by Hootens.com, CF played lights out and was less than a minute away from taking a 14-13 lead into the half.

After a timely interception by Damien Cripps at the goal line was returned to the Cardinals 14 yard line, the Cardinals offense would find themselves in a third and long situation with 34 seconds remaining in the second quarter. CF elected to throw a deep pass that was intercepted near midfield and returned to the CF 6 yard line. CF attemped to ice the kicker – who was also the same player that intercepted the ball – but after a penalty moved the attempt even closer, the Warriors were able to go ahead, 16-14.

"It was a look that we saw on film that we felt like we could take advantage of but LRCA switched out of it at the last second and the ball just got away from us," Monden said. "It's one of those things where if it works then everybody thinks you're a genious. We came to LRCA to win. I wasn't coaching this game just to be close or coaching to not lose. We had a chance to push the lead to 4 or 8 points there before the half against the No. 1 team in the state knowing we were going to get the ball back. Our defense had held them to just a touchdown the whole half and we had an oportunity to put them down by that much. If we can do that, then we are putting the pressure on them. I don't look at that play like that was the reason we loss. We went into the half knowing we still had a shot."

The deep pass proved to be a big weapon for the Cardinals in the first half with a 54 yard reception on a third down and a 30 yard touchdown pass on a fourth down, both to Jaden Bates.

The game opened with the Cardinals winning the coin toss and deferring to the second half. After a sky kick was fielded by the Warriors at its own 47, the hosting team was able to get the ball deep in to Cardinal territory behind a hurry-up offense. The Cardinal defense would stiffen inside the ten yard line and hold the Warriors to a field goal with nine minutes left in the first quarter.

LRCA was able to kick the ball into the end zone on each of its kickoffs forcing the Cardinals to start at its 20 yard line throughout the night.

After a CF punt to the LRCA 25, the home team would benefit from a couple of penalties and ultimately score when Chris Hightower ran outside for a six-yard touchdown. The PAT was good and the Warriors led 10-0 with six minutes left in the opening segment.

CF would again started at its 20 yard line and picked up a first down on the ground. Then facing a third-and-long, Logan Robertson hit Bates on a post route and he raced it all the way down to the LRCA eight yard line for a 54 yard gain. The Cardinals were stopped for a short gain on first down before back-to-back bad snaps pushed CF out of the red zone to the LRCA 30 yard line. Yet again, Robertson would throw a deep pass –this time to the visiting corner of the end zone – and Bates was able to reel in a tipped pass for the touchdown. William Boniello would add the PAT to cut the deficit to three points.

The Cardinal defense put LRCA in a third-and-long situation before LRCA QB Akeem Gilmore was able to break tackles and find a receiver for a 40-yard gain. But the Cardinal defense would force another field goal after bowing up in the red zone.

Both offenses would exchange possession over the next two drives with the Cardinals punting after a three-and-out and the Warriors tuning the ball over on downs.

The Cardinals would take its next offensive possession and get some chunk yardage on the ground before Patrick Rucks scored from 10-yards out. Boniello would add the PAT to put CF ahead 14-13 with six minutes left in the half.

The Cardinals opted to kicked it deep on its next kickoff but the Warriors returned it to their own 41 yard line. After both teams offenses stalled, the Warriors would threaten to score after getting the ball down to the 8 yard line. However, the CF pressure would finally force the illusive Gilmore into making a mistake and Damion Cripps would intercept the ball at the goal line and return it to the CF 14 yard line.

Over the next minute, the Cardinals would turn the ball and the Warriors would kick a field goal with three seconds left.

The Cardinals opportunity to snatch the lead back from the Warriors was squandered quickly when botched hand off went forward into the hands of the Warriors defense on CF's first play from scrimmage in the third. CF would force a fumble when Gilmore attempted to scramble for yards but the Warriors recovered it. On the next play, the Warriors gave it to their power back Kendel Givens who took it in for an 8-yard touchdown. The PAT was good and the Warriors led 23-14 with 11 minutes left in the quarter.

"That ball gets hard to hold on to when it's cold like that," Monden said. "They fell on it and took advantage of it."

The Cardinals would go three-and-out on its next possession and downed a punt that looked like it would've have taken a friendly bounce at the LRCA 47. LRCA would catch the Cardinals slipping on defense with a 41-yard catch and run for a touchdown. The Warriors elected to go for two but it was broken up. LRCA led 29-14 with 8:42 left in the third quarter.

The Cardinal offense would put together a good drive that ate up some clock and got the ball down to the LRCA 30 before turning the ball over on downs. LRCA would add its final score with 11 minutes left in the fourth quarter.

Freshman quarterback Martavious Thomas was brought in to take the rest of the snaps behind the Cardinals and was able to lead them into Warrior territory late in the game before an interception on a fourth down. LRCA would kill the rest of the clock and enjoy its 36-14 win.

Monden shared how much he thought of his seniors and their contributions to the program and also thanked the fans and the band for their support.

"You can not move on too quickly from what these seniors have done," Monden shared. "Young men like Jacobie Williams, Erik Gates, Eric Albert, Jackson Burdue and so many others have done a lot for this program. We'll never forget about the impact of Tyler Kelly either. That entire senior class has been a part of something special. We love those guys, and we're going to miss our seniors and we're thankful for everything they've done. They all have bright futures ahead of them. Going back, our last four seasons have ended with a loss but for the first time there was a lot of hope in that locker room after the game. I think that's because the examples they (seniors) set and because these guys know who all we have coming back. Those guys led us through a lot of adversity. Looking ahead, we had a lot of younger guys get some experience this year and I think they are going to be ready put in some work through this offseason."