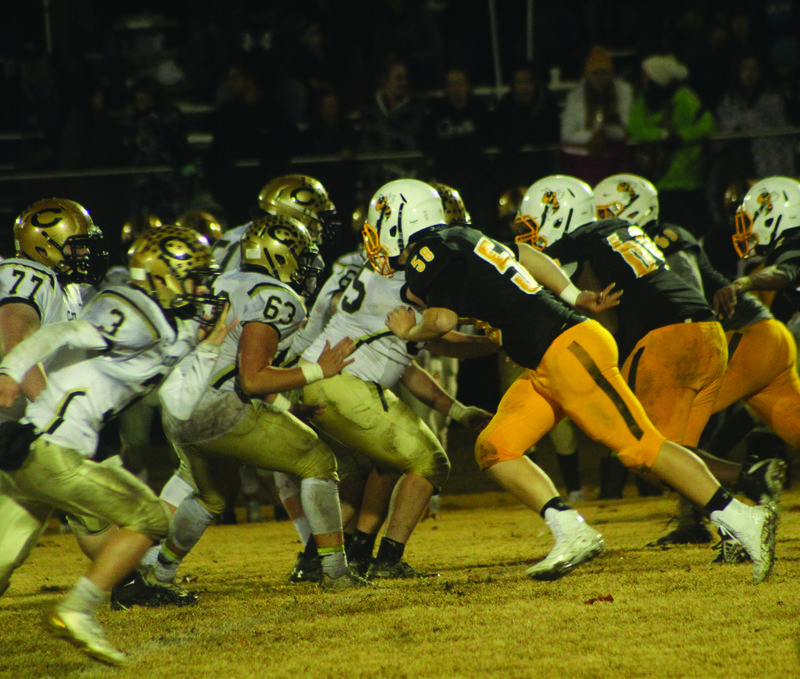 CAMDEN — CAMDEN HARMONY GROVE—The weather did not dampen the Harmony Grove Hornets lightening hot offense on Friday night at Bill Manning Field. They defeated the Clinton Yellowjackets 46-14 in the second round of the Class AAA High School Football Play-offs on a slippery field produced by light rain that fell throughout the day but finally stopped shortly after the 7:00 kick-off.

Both teams were held to three and outs on their first series of the contest, but Clinton struck first when QB Weston Amos scored from 2 yards out with 6:26 to go in the first quarter. The PAT was good giving the visiting team the early 7-0 lead.

Coach Ernie Horstcamp’s Hornets took the ensuing kick-off and used 9 plays to score when Mecca Arnold crossed the goal line on a 2 yard run with 3:52 to go in the first. The 2 point conversion attempt failed, but the home team had pulled within 1 point, 7-6.

The Yellowjackets, coached by Chris Dufrene, set up on their own 40 after the ensuing kick-off. On the next play FB John Riley Hinchey dashed for 60 yards and the score at 3:41 in the first quarter. They added the PAT and built there lead to 14-6.

The Hornets used six plays to tie the game when Zach Smith connected with Xaylon Falls on a 40 yard pass play with only :28 to go in the first quarter.Tobias Hicks scored the 2 point play that knotted the score at 14.

Neither team could score in the second period until Falls caught a pass from Smith for a 9 yard touchdown play with time expiring in the first half. Falls also scored the 2 point play setting the score at 22-14 halftime.

Harmony Grove took the opening kick-off of the second half and mounted a short scoring drive capped by a 10 yard run by Arnold with 10:49 to go in the third period. He also scored on the two point play giving the Hornets a 30-14 lead.

The next score of the game was a defensive one when Clinton’s QB Amos was tackled in his own end zone for a safety giving the Hornets a 32-14 edge with 2:48 to go in the third quarter.

The home team got good field position after the free kick and marched down the field for another score with :17 to go in the third period when Falls caught his third touchdown pass of the night from Smith. This one went for 9 yards. Hicks scored the 2 point conversion attempt pushing the Hornets lead to 40-14.

Harmony Grove’s final touchdown of the night came with 4:25 to go in the contest when Hicks ran it in from the 4 yard line. The 2 point conversion attempt failed setting the final margin of victory at 46-14.

Following the game Horstcamp had high praise for his team. He noted they had a great week of practice and were locked in on the game. He praised their execution against a “really good team.” He said the squad did all you could ask of them.

The win improves Harmony Grove’s record to 10-2 on the season. Clinton’s year ended with a 10-2 record as well.

The Hornets will travel to Cleveland County next Friday night to face the 11-1 Rison Wildcats who defeated Lamar 36-20 to advance to the third round of the play-offs. Kick-off is set for