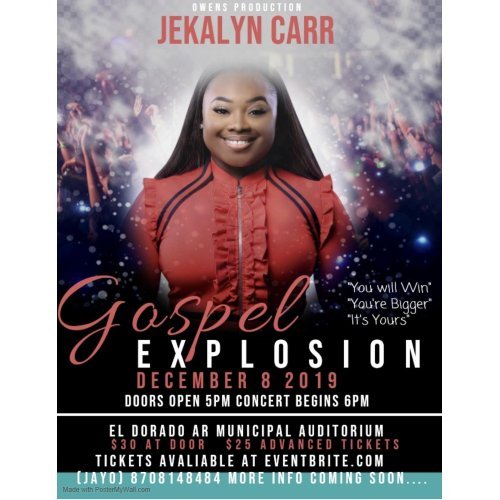 A chart-topping recording artist is set to perform in South Arkansas.

The event is organized by Jeremy “Jayo” Owens of Owens Productions, and proceeds from the event will go to the Michael Hayes Scholarship Fund.

The Michael Hayes Scholarship fund was established by Owens, Hayes’ brother, and members of the family in his memory. Owens said that he has tried to host a concert or an event each year to raise money for the scholarship to present to area students. In the past, the event has welcomed the likes of The Canton Spirituals, Lee Williams and Leandria Johnson. Earlier this year, area welcomed gospel recording legend John P. Kee.

The Voice contestant LB Crew and Camden recording artist Nichole Thrower will serve as host during the concert. Grace Justified and God’s Purpose will also perform.

Carr was born in West Memphis Arkansas and released her first national single in 2012 titled “Greater Is Coming” with the Lunjeal Music Group. The album reached No. 3 on the Billboard Gospel Albums. She won a Stellar Award at the age of 16 and has released two live album – The Life Project and One Nation Under God – that debuted at No. 1. The GRAMMY Award nominee and a GMA Dove Award-winning recording artist has earned eight career Billboard No. 1s before the age of 21.

Recently, Carr was named to the Power 100 by Ebony Magazine as one of the most influential people in the world sharing the list with the likes of Lebron James, Quincy Jones and many other notable celebrities.