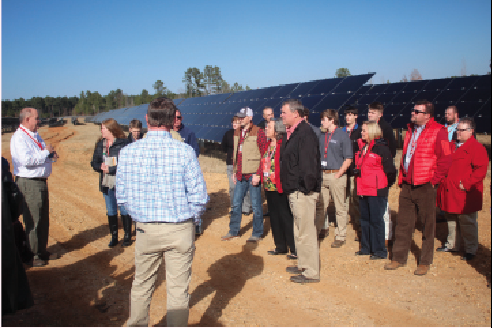 This 2018 file photo shows the solar farm at Aerojet Rocketdyne. Ouachita Electric is asking state regulators for a lower rates for it’s members due to solar efforts such as this.

CAMDEN — Ouachita Electric Cooperative is preparing to ask state regulators to lower rates for its 7,000 members in five south Arkansas counties. The decrease is fueled by advances in solar power and other efficiencies the utility has created.

The request, which should be filed by Nov. 1, will ask the Public Service Commission to approve a 4.56% rate drop, according to Mark Cayce, general manager for the Camden-based-cooperative.

“This is an across-the-board decrease for all customers,” Cayce said, noting that the average residential customer will receive a 4.15% rate cut. Individual rate cuts are based on usage.

Ouachita’s board of directors approved the decrease last week, and the utility is preparing a filing to present to the state commission for approval. The filing should be submitted by the end of the month, and regulators have 90 days to act on the filing, Cayce said.

The utility serves customers in Bradley, Calhoun, Dallas, Nevada and Ouachita counties. Those customers should see the rate decrease included in their February 2020 bills.

“It’s the first rate decrease we’ve had like this in at least 20 years,” Cayce said. “Tradition has been that rates steadily increase over time, and we saw the opportunity to turn that around, and we think it’s the right thing to do for customers.”

Ouachita Electric worked with Aerojet Rocketdyne Inc. to put in place a 12-megawatt solar operation in 2017 to power its operations, a move that has helped the utility reduce the amount of power it buys during peak demand. That has led to lower costs being passed along to customers.

“This is a good example of how embracing clean energy and reducing carbon can benefit both customers and the planet,” said Julia Hamm, president and chief executive officer of the Smart Electric Power Alliance in Washington, D.C.

The national organization named Ouachita Electric as its top electric cooperative utility of the year in 2017 for Ouachita’s work with Aerojet Rocketdyne.

“Solar has allowed us to lower our peak-demand costs, and we’ve been helped by our energy-efficiency program, which also has lowered peak-demand costs,” Cayce said. “When you add it all up at the end of the day, we’re able to decrease rates because we’re more efficient in our operations.

“Solar has been a big part of this — it’s creating jobs, it’s lowering prices and we hope that stimulates more business.”

The utility i a key advocate for solar power in Arkansas.

“They’ve really championed solar’s economic benefits,” said Katie Niebaum, executive director of the Arkansas Advanced Energy Association. “And it’s because these innovations are good for the utility and good for their members.”

The solar array helped retain Aerojet Rocketdyne, one of the largest employers in the Camden area. The company is now engaged in a $50 million expansion that will add another 100 jobs at the manufacturing facility over the next few years.

“That shows how advanced energy and solar, specifically in this case, have been an economic multiplier,” Niebaum added.