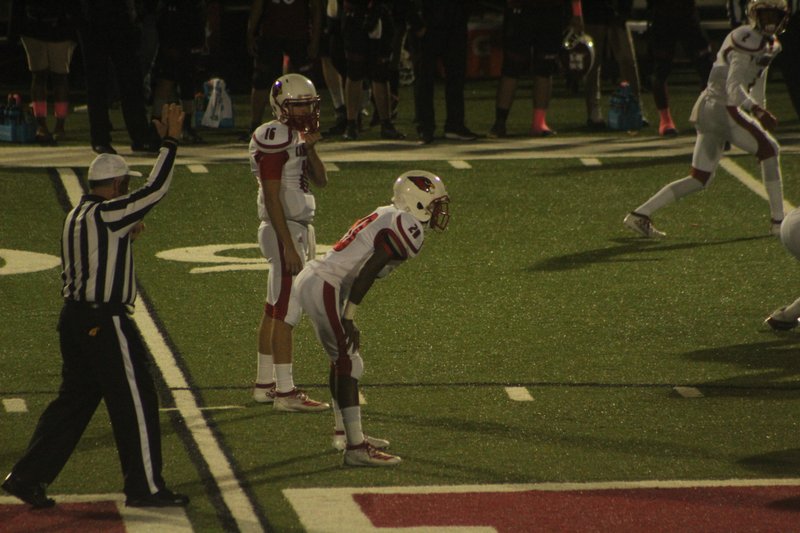 Two weeks ago, the Camden Fairview Cardinals (4-4, 3-2) were on the outside looking in at the 5A South Playoff race. Now, the Cardinals are on a two game winning streak and in a three way tie for second after defeating the Hope Bobcats (1-7, 1-4) by a score of 54-14 at Hammons Stadium.

One may argue the only concerning moment in the game for the Cardinals happened on the opening kickoff when the Bobcats recovered a short squid kick in the middle of the return team. The Cardinal defense would force a turnover on down at its own 45 yard line and Erik Hall would make his presence felt with a 55 yard touchdown run on the Cardinal offense’s first play from scrimmage. William Boniello’s PAT was good and the Cardinals led 7-0 with 9:59 left in the opening segment.

CF would score again after its defense got back on the field when EJ Gates played the pass perfectly, intercepted the ball and took it 48 yards for a touchdown. This time, freshman kicker Nasir Kahn made his varsity debut with a successful PAT.

The Cardinals would get another score when Logan Robertson found Dashaire Ford-Burton for a 14 yard touchdown. Boniello’s PAT was good and the route was on with 5:43 still left in the first quarter.

CF ended the quarter by driving the ball all the way from its own 5 yard line and capping it with a 39 yard touchdown run by Hall that was debated by officials before they ultimately got it right. The ensuing PAT had the distance but veered left as CF held tight to a 27-0 lead.

Hope would pick up its first, first down in the second quarter and force a CF punt in the second quarter. CF appeared set to put the game away for good when it got down inside the 10 yard line. Robertson dropped back to pass and loss control of the wet ball as he was throwing it. While it looked like an incomplete pass, officials ruled it as a fumble. On its next drive, Hope QB Hunter Hellums hit McKinsey Davis who had squatted in a wide open spot and out raced Cardinal defenders for a 72 yard touchdown. The PAT was good as CF led 27-7.

CF would respond quickly when Gates was brought in to run the read option and ran 52 yards up the middle. On the next play Patrick “The Bus” Rucks rumbled for a three yard touchdown. Kahn would add the PAT to give CF a 34-7 lead with 3:15 left before the half.

The Cardinals weren’t content with the big lead and in an effort to move closer to getting its players home quicker and out of the misty weather, CF looked for the end zone after its defense forced another Hope punt. After picking up a couple of first downs in the run game, Robertson hit Ford Burton near mid-field for a 12 yard gain. Then Robertson aired it out 40 yards to Javien Clemmer - back from an injury last - who out leaped and wrestled the ball away from the Hope defender with one second remaining before the half. After a CF timeout, Robertson hit Clemmer on a comeback route for an 11 yard touchdown as time expired. The PAT was blocked to give CF a 40-7 lead at the half.

CF played several of its alternate and reserve players in the second half and the sportsmanship rule would go into effect when Jacoriae Brown punched in a touchdown with three minutes left in the third. Kevin Tate would score the final touchdown for the Cardinals - and his first varsity touchdown after recovering from offseason surgery - with under two minutes left in the game. The PAT was good to set the final margin.Nine players rushed the ball for the Cardinals with Gates leading the way with 118 yards on 8 carries from the quarterback spot. Hall rushed the ball three times and scored twice finishing with 106 yards. CF ended the night with 365 rushing yards. Robertson was 11/15 for 189 yards and two touchdowns and Gates was 1/1 for 14 yards - finishing the night with 180 all purpose yards.