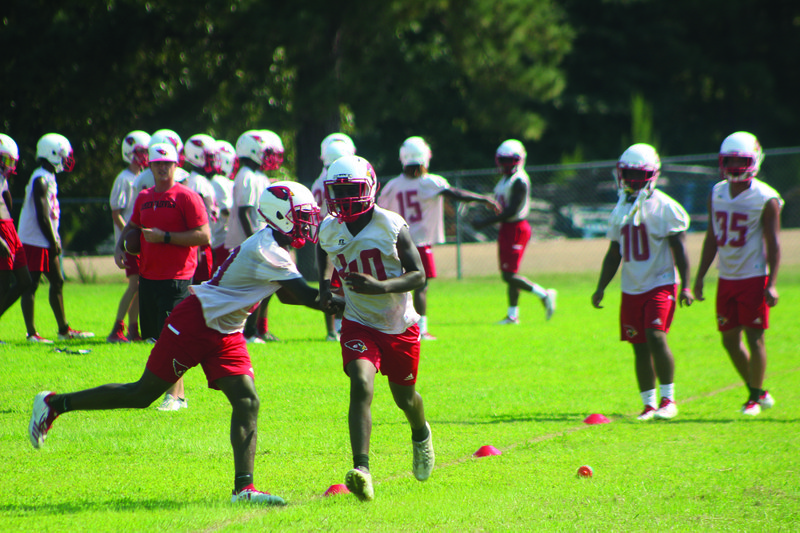 CAMDEN — Ouachita County football fans and parents are in for a treat as Week 1 of high school football kicks off tonight.

Another chapter in the 50-plus year rivalry between Harmony Grove (1-0) and Bearden (1-0) will kick off at 7 p.m. at Rogers Field in Bearden and non-conference foes Camden Fairview (0-0) and El Dorado (0-1) will kick off at 7:30 at Cardinal Stadium.

The Cardinals will be looking to do something it hasn’t done in varsity football game in six years: Beat El Dorado. C.F. has played the Wildcats tough but it hasn’t show on the scoreboard with the Wildcats outscoring C.F. on an average of 31-13 over their last five meetings.

The Cardinals will host an El Dorado team with a lot of questions on defense after allowing 460 yards against a Conway team that was predicated on running the ball. The Wildcats lost 37-27 in its first game under new head coach Steven Jones.

The Cardinals had a focused week of practice and worked to find a replacement for starting quarterback Gunner Branch who is out with torn ligaments in his ACL and MCL. Sophomore quarterback Logan Robertson took the bulk of the snaps at quarterback.

CF will be led on defense by Jacobie Williams who had a big game against El Dorado as a junior. Williams lines up at defensive tackle this year but has speed and athleticism to run sideline to sideline. CF also holds a speed advantage on offense with explosive wide outs and running backs that have been dialed back during scrimmage games.

Stats do not accurately depict how dangerous this year’s El Dorado Wildcat football team is. The Wildcats have a nose guard in Jacoby Hankton (5’8, 240) that won over praise from Conway’s head football coach and defensive end Quentin Frazier (6’0, 215) that lead the team with 15 tackles last week.

The Wildcats have SMU commit in 6’7, 280 Dalton Purdue lined up at tackle on offense and return Alex Hicks who had a big game against the Cardinals last year as a quarterback. This year, Hicks will line up at running back and take some snaps behind the center in certain situations. They also have an explosive sophomore in wide out Jackie Washington who returned a kickoff for a touchdown and caught an 80-yard touchdown.

Both Harmony Grove and Bearden played critical games in Week 0 and were victorious. The Hornets hosted 2A No. 1 Junction City and defeated them 30-26 and the Bears traveled to Lafayette County where they defeated the Cougars 22-8 in a game that was called in the third due to lighting.

The Hornets led the majority of its game against Junction before trailing briefly in the fourth quarter. Things seemed grim as H.G. started having trouble hanging on to the ball and dealing with a lot of players cramping up on the sideline. However, the team still managed to fight its way back into the game as players that hadn’t seen a lot of time, were called on to put in work.

This week, H.G. Head Football Coach Ernie Horstkamp said that his team had a good week of practice and focused a lot on staying hydrated and taking in a lot of electrolytes.

“It wasn’t all fatigue,” Horstkamp said. “We had guys cramping up after 20 plays and that shouldn’t happen. That told us that we needed to take care of ourselves and it wasn’t about being in shape. We needed to get some nutrients and electrolytes in us. We did a lot of that with Gatorade after practice this week.”

The Hornets remained at No. 1 in Class 3A according to the Hooten’s Week 1 rankings. Horstkamp said that he is honored but doesn’t get “too caught up in it.” He said that he is proud of his team for being “mature” and not being complacent just because of the rankings.

Bearden came on strong in the second half in its game against Lafayette County after trailing 8-6 at the half. The Bears were able to score twice - once on defense - to take the lead. Bearden Head Coach Greg Anthony said his team did a great job of adjusting and came out in a different formation that Lafayette County had trouble dealing with.

“We were just starting to click on offense there in the third,” Anthony said. “We moved the ball well in the first half but we kept having penalties and things that would stop us when we got close to the end zone. We had a come-to-Jesus talk at half time and really came out playing well.”

Anthony added that his team had a focused holiday practice and that he is pleased with hist students’ initiative to study game film. He also mentioned that his team is enjoying the sport and are relishing in the fact that this is the first year starting the season with a win since 2015.

“I know the Harmony Grove game is always a big one,” Anthony said. “It’s two really close schools. But I told our guys it’s just one game. It doesn’t make or break our season.”

Last year, the game wasn’t decided until late in the second half when H.G.’s Xaylon Falls scored just one play after the Hornets recovered an onside kick near mid field to set the final margin at 22-14.