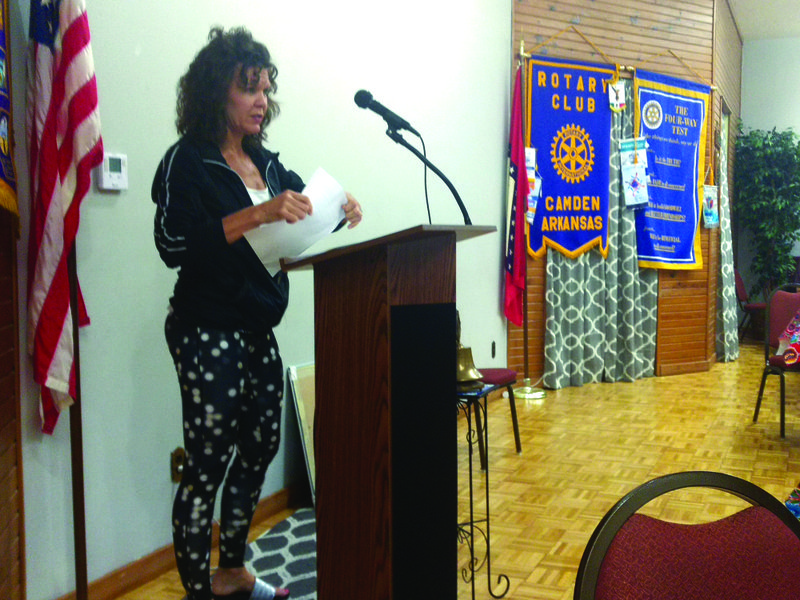 Talking about creating a healthy lifestyle Jenny Kuhn speaks to the Camden Noon Lions Club about the importance of a healthy lifestyle. Kuhn is the owner of Jenny’s Gym in Camden. Her sister, Jackie Keller, also talked to the group. See related article. - Photo by Bradly Gill

CAMDEN — Two sisters, Jackie Keller and Jenny Kuhn, spoke with the Camden Lions Club on Wednesday about the importance of healthy living and healthy choices.

Kuhn is the owner and operator of Jenny’s Gym, while Keller runs STRONGER, a one-hour class that, according to its Facebook page: “The goal of STRONGER is to encourage people to get moving, get stronger, and take charge of their health. Encouraging music, great company and fun workouts designed to keep you, stretch you and strengthen you.”

In 2016, Kuhn broke the world record for the American Powerlifting Association’s world title in her age/weight group for bench press, dead-lift and squats.

However, she hadn’t always been so health conscious.

She said, “When I was child, our parents smoked, and I remember thinking ‘I have to smoke when I get old.’ That’s just part of it. My parents smoke, I have to smoke, and we were miserable, we would just sit in the back of the car and all that smoke in their and get carsick. I remember about fifth grade I thought, ‘I don’t have to do that. I don’t have to smoke.’ It was like (as) a young child, I was kind of set free from that mentality that I had to do exactly what my parents did.”

Kuhn said her journey into health and fitness began in her 30s when trying on clothes in Iowa and they became a bit snug. She said, “It was only four pounds, but I knew what four pounds was going to become. Four pounds, becomes eight, and 16 and 32.”

“One of the things we always hear is ‘I can’t exercise, because I’m too old,’ and I say: ‘You’re too old, because you don’t exercise,” she said.

Still, Kuhn’s incredible fitness journey was not without it’s own speed-bumps. She said that in 2017, she blew two discs in her back and was told she required surgery. She opted not to go under the knife and instead, adopted a passage from the Bible, Psalm 40:10:

“I have not hid thy righteousness within my heart. I have declared thy faithfulness and thy salvation. I have not concealed thy loving kindness and thy truth from the great congregation.”

She credits God with her recovery, but said the choices we make every day are key to our current and future health.

Kuhn said that the average muscle mass deteriorates 3-5% every decade and that our health and choices in the first 30 years of life affect the next 30 years, which also determine if you make it to the next 30 years.

Kuhn said the simplest thing a person can do is simply be mobile and to “choose life.”

Keller’s portion of the program was also about choice, and in an area over which most people think they have no control.

Keller said that epigentics is the study of heritable changes in gene expression - active versus inactive genes - that do not involve changes to the underlying DNA sequence. She said that a change in phenotype without a change in genotype — which, in turn, affects how cells read the genes, - plays a far bigger role in our health than previously thought.

Keller’s fitness journey started after the birth of her seventh child when she could no longer touch her toes.

“So after my seventh baby, I couldn’t touch my toes and I decided to do something about it,” she said. “So I got together with my girlfriends and we started exercising and praying and had this great group and it was really exciting and successful and I thought ‘I’m going to take this to the streets.’ I had no idea what I was doing…None.”

Keller shared articles about how intense exercise can alter DNA, as well as diet playing a factor in genetic expression for generations.