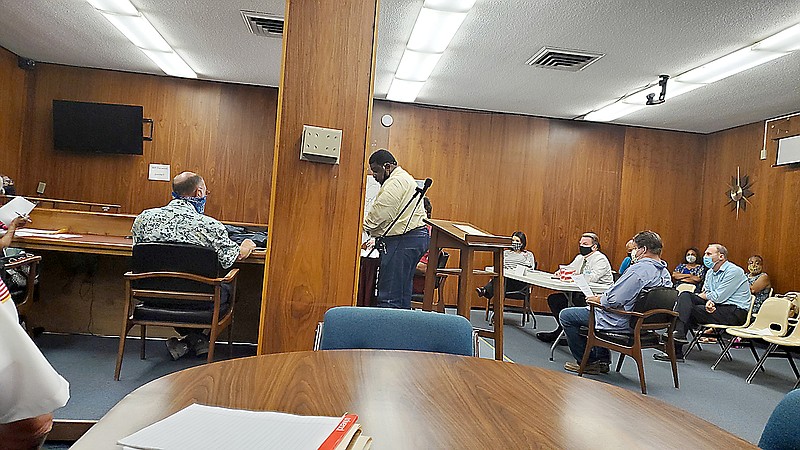 Several city boards were shaken up during Tuesday’s meeting of the Camden City Council when Alderman Willie Cooper resigned from both the Planning and Zoning Commission and the Board of Adjustments to focus on his ongoing campaign and avoid any conflict of interests while running for the Council’s Ward 3, Seat 2 position.

The seat is currently held by Irene Galbert, who is not running for reelection; Cooper is running against Sandra Lee and Cecil McDonald for the seat. Cooper thanked Galbert for her service to the community during Tuesday’s meeting.

An ordinance that would require the City’s budget and the information packets distributed to Council members prior to Council meetings to be posted on the City’s website was also discussed at the meeting.

Rashell Williams, a Camden resident, asked about the ordinance and noted that the city’s website was out of date in many instances. She also questioned why Alderman James Bell, an employee of JC Production, a local production company, had introduced the bill and why the city paid $28,000 to the company when they could have hired an IT specialist to maintain the site. She said she felt he should recuse himself from voting due to a conflict of interest.

Bell responded to the questions, saying, “First I’m not sure where Miss Williams got her information, there are some inaccuracies in that. I guarantee you at no time did we receive $28,000 for any of these website. What we did do, we did three separate sites: one for the City, one for the Chamber and one for OPED, which is Team Camden. We also did a splash page so we can start bringing traffic to one place.”

Bell went on to say that JC Production is not paid by the city to update the site and that department heads have log in info to update the site as needed. Bell said the only updates that JC production currently provides is to the events calendar on the Advertising and Promotion page. JC Productions has a separate contract with the city’s Advertising and Promotion Commission for this service.

“The reason I helped develop this is there’s information the last few months we’ve been getting requests for. ‘Can we see the city budget?’ ‘What’s the information that we get every month?’“ Bell said. “This is all public information, none of this is secret, so I thought this would be a great way to put it out in the open. To make it easy.”

Camden Mayor Julian Lott said his issue with the proposal was the word “shall,” which he saw as more legally binding than the term “will.” He also questioned who would be the actual person making the changes to the sites and what would happen if the city chose a new web domain.

Bell answered, “You are the city. You’re the mayor. You’re the office. Tell Donna. Tell someone to do it.”

“Right now it’s explorecamden(.com). It’s whatever the city chooses as its official website. I want to make something clear. I’m going to abstain from this vote, granted the city doesn’t pay JC to maintain this site. When it was first developed they paid us to develop the site,” Bell said.

The vote was tabled until next meeting so the city could review its options.