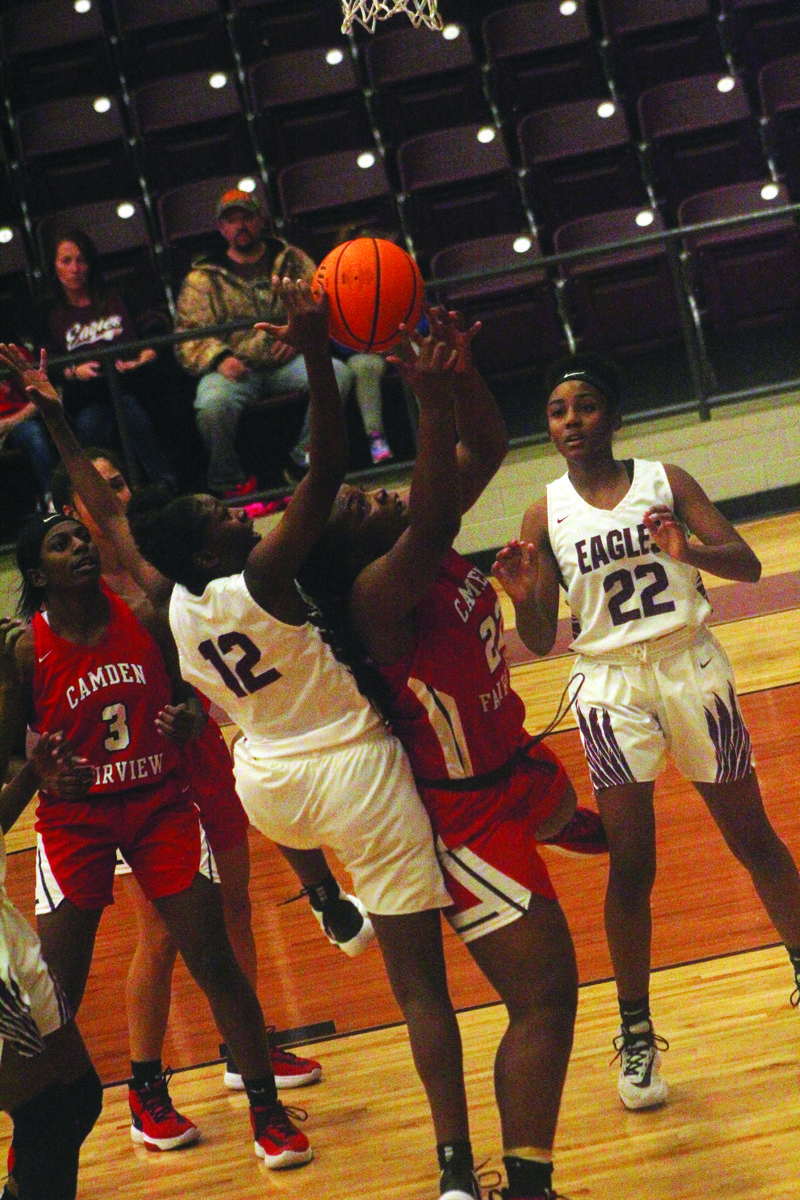 No call Camden Fairview’s Jhiya Jefferson (22) attempts to make a rebound as a Crossett player leans over her back. The officials let the physical play continue. - Photo by Patric Flannigan

CAMDEN — The Camden Fairview Varsity Cardinals picked up a critical win on the road against the Crossett Eagles last Friday, 53-50.

With the win, the Cardinals are now the fourth seed in 4A Region 8 with four more conference games left on the schedule. The top four teams from each region advance to post season play.

CF looked to avenge a two point loss to Crossett in January when the Eagles’ Derrick Luckey scored on a last second lay up to win 63-61.

The game went back and forth early before as each team looked to push tempo. CF’s Corey Lockhart, Jaden Bates and Dashaire Ford Burton would combine for five steals in the opening quarter to give CF an advantage. In the second quarter, Ford-Burton had to leave the game momentarily after suffering what appeared to be a wrist injury. The Cardinals would get solid minutes from Ja’quavis Strickland in the mean time and CF lead the home team, 25-18 at the half.

In the third quarter, the Eagles put on a full court press but the Cardinals exploited it. Christian Strahan reeled in five long rebounds in a single quarter that helped propel CF to a 41-28 lead entering the fourth quarter. CF continued to lock in and play disciplined defense to keep the Eagles out of the lane for the majority of the game, but a double technical swung the momentum back in Crossett’s favor. A Crossett player was fouled and was chirping back and forth with a Cardinal player. The Cardinals walked off as the Crossett player was still talking and the official called a technical on the Crossett player and a CF player that was already on the sideline talking to the coach.Crossett made it a two -point game, 49-47 but Isaiah Hughes and Strickland would come up with big steals and find Bates flying down court for a couple of easy buckets to make it 53-47 with 52 seconds left in the game.

Luckey would start to get into a rhythm after struggling for much of the night and had a three-point attempt after a couple of missed CF free throws with under ten seconds left, but the shot hit the side of the rim and CF walked out with the victory.

Bates led the Cardinals in scoring with 16 points (eight in the fourth quarter) and five rebounds. Lockhart had a double-double with 11 points and ten rebounds. Hughes added 10 points and Strahan had 9 points and seven rebounds.

After starting the season 3-13 and 0-5 in conference play, the Cardinals have won four of the last five games.

The Camden Fairview Varsity Lady Cardinals got off to a better start then they did in the first meeting against Crossett, but this time the results were in the Lady Eagles’ favor. Crossett defeated CF 57-45 in a game where the Lady Cardinals were plagued with early foul trouble and only four players were able to score.

The game was tied at two when CF was whistled for four fouls in a single possession. By the end of the first quarter, the game was tied at 11 but CF had eight team fouls with Raven Porchia, Jhiya Jefferson and Tamia Dandridge having two each.

Crossett would end the second quarter on a 8-2 run to take a 27-19 lead at the half. In the third, Crossett would continue to do damage at the free throw line as the Cardinals would struggle. Still, CF would cut the lead down to three, 34-31, before Crossett would respond with a 6-2 run.

The Lady Eagles played well defensively but got the benefits of several calls and no calls whenever the Lady Cardinals would attempt to go on a run.

The Lady Cards currently sit just outside the regional tournament picture as the fifth seed.