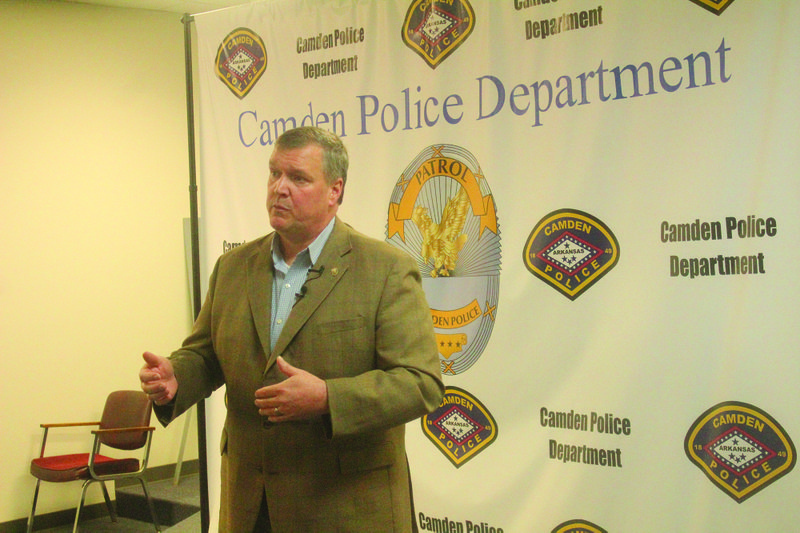 CAMDEN — A news release held at the Camden Police Department divulged more details regarding a viral video involving a police officer and a student.

CPD officer Jake Perry has been relieved of his duties pending an investigation after a video released on social media showed Perry appearing to choke a Camden Fairview High School student, lifting him off of the ground while attempting to detain him. Perry was assigned to work as a School Resource Officer at CFHS this month.

“Because of the video I saw, effective immediately, Officer Perry has been relieved of his duties pending the investigation and the outcome of it,” Woody said just an hour after learning of the incident on Monday. “I just wanted everybody to know, including the Mayor (Julian Lott) that as the police chief, I’m not going to tolerate misconduct from officers from this department.

At the time, Woody had only had a brief conversation with Perry and had assigned a CPD Criminal Investigator Captain to take over the investigation.

Woody said that the student and his parent will also come in for interviews and that he has officers already at the high school working to get footage. He confirmed that Perry was wearing a body camera but said that he hasn’t viewed it yet.

“We will look in to everything then I will give my findings to the mayor and make this public,” Woody said. “I would like to add that the onset of this the video does appear that force was excessive. Just from what I saw on the video is the reason we are going to do this investigation and handle it accordingly. And like I said, I won’t tolerate it if its true.”

Woody said that Perry has been with the CPD for just over two years and said that during his brief conversation with him, Perry said he was responding to a report of a fight and was trying to detain the student.

“But the CPD and all law enforcement, we have policy and procedures on how we detain a subject,” Woody explained. “What you see is what I see and I’ll find out and give you an answer as to rather or not that was unlawful…. We take a lot of things in to consideration when we arrest somebody. Of course, age is one of them. Rather they’re young or rather they’re old. Technically the procedure is supposed to be the same but we do use discretion on age or maybe even gender at times.”

Shortly after the Camden News spoke with Woody, the CF School District released a statement from CFSD Superintendent Fred Lilly saying the district was aware of the incident.

“I have been informed that the officer involved has been relieved of duty pending an investigation by CPD,” the release states. “CFSD will fully cooperate with the CPD’s investigation. In order to prevent similar incident from occurring in the future, CFSD will work with the CPD to ensure that current policies and procedures for all SRO’s stationed at CFSD schools are reviewed and revised if necessary. CFSD’s first priority is, and will continue to be, to provide an excellent education to all of our student in a safe environment.”

During a news conference held at the CPD, Lilly said that he went to the high school to review the footage from the security cameras. He stated that he saw two students that were not fighting but “were trying to get to that point.” He said he could see Perry standing about 10 feet away from the students before getting involved. Students pulled one student away while Perry pulled away the other and things “escalated from there.”

Also during the news conference, Woody said that the way he saw Perry act in the video “was not in the nature of the CPD,” and emphasized that an investigation will still be conducted. Woody added how important it is to be transparent about the issue.

“I think in today’s society, police officers at times, are not as transparent and it makes them look bad,” Woody explained. “For the Camden Police Department we have always strive to make sure we provide the best quality of service and we have officers that are held to a higher standard than most. There’s no difference in this case. If there was misconduct, we will handle it appropriately… The outcome of this will be just”