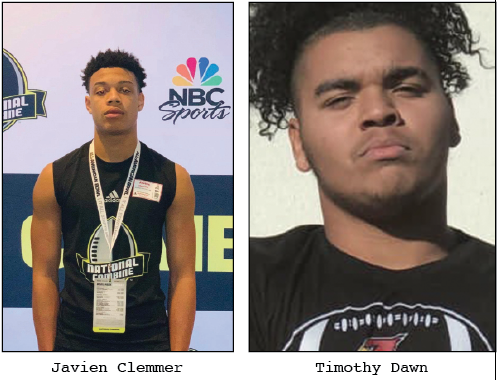 CAMDEN — • Camden Fairview junior wideout and cornerback Javien Clemmer recently attended the All American National Combine in San Antonio. Clemmer has several offers so far with the latest coming from Southern Miss University. He has also received an invited to the Hall of Fame Academy 2020 World Bowl National Combine at the 2020 NFL Pro Bowl later this month in Orlando.

• Camden Fairview sophomore offensive tackle Timothy Dawn Jr. is one of eight highly recruited offensive linemen in Arkansas according to the Arkansas Grid Report out of Van Buren. Dawn is 6’4”, 270 and started in every game during the 2019 football season. He already has an early offer from Kansas.

The “Sports Spotlight” portion of the sports page has been created for the purpose of promoting Ouachita County high school student athletes to help with support and recruiting during the offseason of the sports they are playing in. The portion will also include recommendations from coaches or teachers to highlight area students for their efforts in the classroom or during practice. Every sport is included. All camp photos, recruiting news or hard working acknowledgments can be submitted to [email protected]