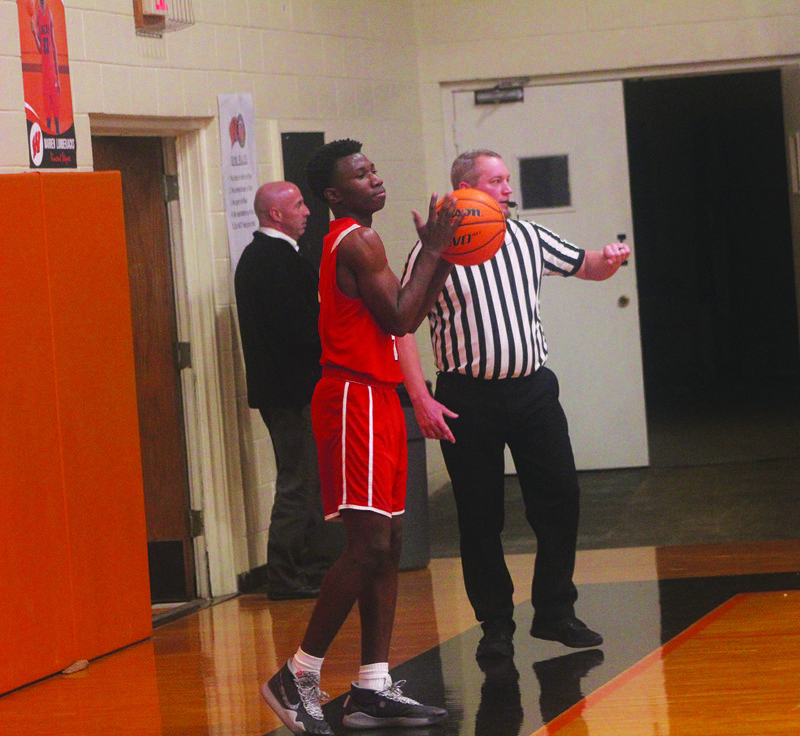 Camden Fairview freshman Jarvis Reed takes the ball out during a recent game against Warren. The freshman Cardinals won the game, 44-29. - Photo by Patric Flannigan

The Camden Fairview Cardinals (3-9, 01) and Lady Cardinals (5-7, 0-1) opened conference play on the road on Tuesday with both squads falling in defeat to a pair of tough Warren teams.

It appeared that the Lady Cardinals’ biggest opponent was themselves more than it was Warren. Things couldn’t have opened much worse for the Lady Cardinals after trailing by 11 points early. Starting point guard Tamia Dandridge got in foul trouble early and had to sit. CF’s guards would struggle getting the ball up the court as they kept dribbling into the sidelines and turning the ball over against Warren’s pressure defense. When CF would get the ball inside on offense, they were unable to reap the benefits of the officials’ whistles and would miss close range. The Lady Cardinals would end the quarter down, 22-4.

CF would play better in the second and trail, 35-18 at the half.

Coach Johnny Jackson’s Lady Cardinals improved dramatically on the defensive end in the third and did a better job finishing through contact and crashing the boards. CF’s defense held Warren to only seven total points in the third and was so hectic that a Lady Lumberjack got a defensive rebound on the Lady Cardinals last shot attempt and threw it back in to score two points for the visiting team and make it an 11-point game.

CF cut the deficit down to seven early in the fourth quarter but Warren was able to do enough to salvage the win.

The varsity boys game was similar to the varsity girls game as the Cardinals struggled to find their way on the offensive end and trialed 14-6 to end the first quarter. However, CF’s Isaiah Hughes was hot and hit three, three-pointers to combat Warren’s zone defense. CF would only trail, 23-19 at the half.

The Cardinals would build momentum and have a couple of opportunities to take control of the game in the second half. After forcing a five second count on an inbound pass, the Cardinals would tie the game when Dashaire Ford Burton would go 2/2 from the line. The Cardinals defense would come up with a stop and Hughes would give CF its first lead on a runner from the left elbow. Warren would then get hit with a technical foul on its next trip down the floor and Burton would go 1/2 from the line. CF led by three points and showed great discipline draining the clock from 1:48 all the way down to 5 seconds, until a traveling call put the ball back in Warrens hands. Warren would draw a foul on a desperation three with a second left in the third and hit 2/3 of its free throws.

The lead would go back in Warren’s favor after a T.J. Phillips three pointer but Chris Strahan would tie it with a jump shot. Warren would go ahead again with two free throws before Corey Lockheart scored on a big put back. Again, the Cardinals would have a chance to go ahead when Ford Burton was the victim of an offensive foul when trying to go above a screen, but CF’s next possession would come up empty and Phillips would hit another three.

After another big three from Phillips put Warren up by six, Hughes would close the gap for the Cardinals with a three of his own. Then Strahan would hit a three from NBA range to tie the game at 39 with 3:30 left in the fourth quarter.

The remainder of the game was dominated by Warren after they were able to make the most out of its possessions by getting to loose balls and the Cardinals were unable to draw fouls on the inside. The Cardinals trailed 44-48 with 28 seconds left when Strahan attempted to rebound a free throw and was clocked in the head by a Warren defender and went down. Warren raced the ball down the court and was able to get a three when the Cardinal defense got out of position chasing a loose ball. That would make the deficit too much for the Cardinal to overcome in the limited time.

The freshman Cardinals picked up a win against Warren, 44-29. After the contest went back and forth early, CF took a 24-12 lead into the half and kept the pressure up to secure the win.

“It was good,” CF 9th Grade Basketball Coach Caleb Spradlin said. “We been on a break, so to get back out on the basketball court, I mean you could tell that we had been off a few weeks. There were some moments we had when we just got a little sloppy. It took us a couple minutes to get going to start the game but when we caught our rhythm I thought we played pretty well. I was really proud of the effort on the road… There’s a lot that can be learned in junior high. They’ll be playing these guys (Warren) throughout their high school careers so you kinda can get in their heads a little bit in Jr High if you establish that early. That’s good.”

Spradlin said it was a team win and recognized several players for their contributions during the game.

“I have to mention Jarvis Reed and KJ Ross,” Spradlin said. “I thought their effort was great. They made a lot of really big effort plays – taking charges and really getting after loose balls and big rebounds. Scoring wise, Trevion King and DeAdrian Howard night in and night out they go get us points. I think they had 13 and 12 respectively. It was a good team win.”