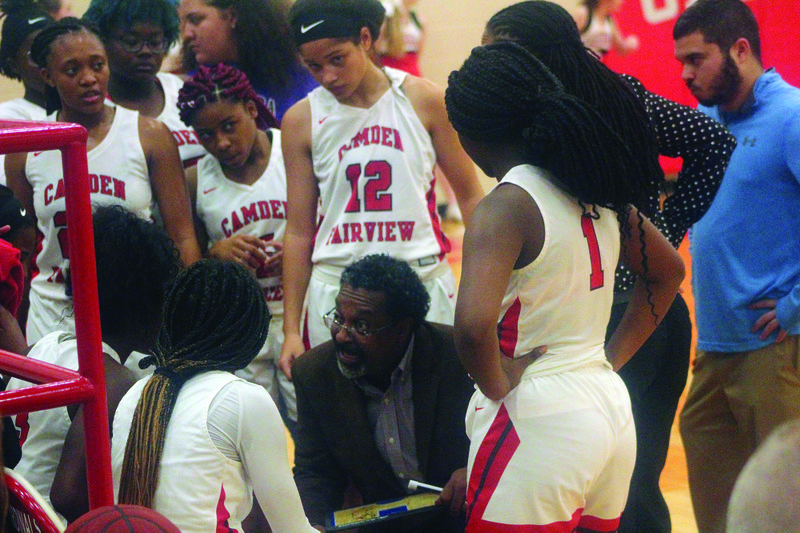 The Camden Fairview Lady Cardinals are back at .500 on the season and most importantly conference play after defeating Crossett, 41-32.

CF got good looks on the inside but were unable to score as the Crossett Lady Eagles sprinted out to a 13-0 start. It wasn’t until the second quarter when JaKayla “Bre” Harris drained a 10-footer from the left side of the lane did the home team finally get on the board. Crossett would lead 18-5 before CF went on an 8-2 run to get back into the game.

After trailing 24-16 at the half, the Lady Cardinals came out on fire. The Lady Cardinals forced two turnovers that led to two three pointers from Takari Glover. Then Tania Dandridge came up with a steal near the Crossett foul line and raced down the court for a layup to tie the game 26 at 5:37 mark of the third. Things would get even better for the home team on the next trip when a long defensive rebound was collected by Glover and she found Jhiya Jefferson running down the court for another lay up to put CF ahead 26-24.

CF would go on to limiting Crossett to just two points the entire third quarter and ended it with a punctuation. With 10 seconds left in the third, Glover brought the ball up court and made a move to create separation and nailed a three just before the buzzer to give CF the 37-26 advantage.

After an early three pointer from Crossett in the fourth, the visiting team wouldn’t score again until there was 1:03 left in the ball game.

“Well we couldn’t throw a rock in the ocean to start the game,” CF Head Lady Cardinals Coach Johnny Jackson said. “I just told them to keep playing defense and keep the pressure on them and once we see the shots go in a couple of times we’ll be OK. Bre came out and hit the first basket and kinda got everybody going and that’s what a senior is supposed to do. Calm everybody down. Then the second half we go in down eight points. I told them, “four stops, four scores and the game is tied.” I asked them how many layups did we miss, how many free throws did we miss and how many times we weren’t on the help side, putting pressure on the ball. So we came out the second half and turned it up on defense and that turned it up for our offense… They tried to play four on three by doubling Jhiya. Early on, Takari’s shot wasn’t falling. I told them to settle down. If you notice, I didn’t call a timeout in that first quarter. They gotta figure out that I trust them and they gotta understand that they can trust me.”

Jackson said that he knew Crossett would be a tough opponent because they are well coached and aggressive. He also acknowledge Sanders for taking charges despite being one of the smallest student athletes on the court.

“I told (our team) before we played that we are playing against seven Tamia’s,” Jackson said comparing the Lady Eagles to the Lady Cardinal guard. “All of them play just like Tamia. They are very athletic and they like to go right. We got to get back on defense and take some charges on the right hand side. (Nicole) did exactly what I said do and it helped us out. You got to have somebody on the court that does exactly what you ask them to do. She might didn’t score any points but in the coach’s mind, she did a great job getting back on defense and keeping them from scoring…”

The CF Cardinals fell seconds short of securing its first conference win and its first win period since December, but loss in a heart breaker to the Eagles, 63-61.

The Cardinals were without starting forward Jacorey Lockhart who was battling illness, but were able to play neck-and-neck with the visiting Eagles.

Crossett took an early lead but CF got back into it by crashing the boards and out-running the Eagles. CF led 16-12 before Crossett’s Derrick Luckey (30 points) made the most of a three-point play opportunity to make it a one-point game going in to the second quarter.

CF would struggle towards the middle of the quarter and Crossett would lead by as many as eight points by scoring on weak side put backs. Big threes from Christian Strahan and Isaiah Hughes shrunk the Crossett lead, 34-31, just before the half.

The home team would out-score Crossett, 20-10, in the third quarter as CF’s defense stepped up. The Cardinals were also able to drive strong and find Myron Gunter on the inside - similar to how Crossett scored in the first half. Hughes also drew two charges and Strahan had a big breakaway dunk as Dashaire Ford Burton and Gunter combined for 14 points in the quarter.

CF led by as many as seven points in the fourth quarter but Luckey was able to get to whatever he wanted on the offensive side including two critical free throws late to tie the game at 61. CF got the ball back with 18 seconds left and as Strahan crossed the half court line, a Crossett defender aggressively reached in for what could’ve been a foul. However, the ball last touched Strahan and Crossett was granted the ball. Crossett ran isolation and Luckey drove to the bucket, put it up soft and got the lucky bounce with .3 seconds left. After a timeout, the Cardinals attempted to throw the ball down court for a quick pass but it was picked off as time expired.

Ford Burton led the team with 19 points and three assists followed by Gunter with a season high of 14 points and nine rebounds. Strahan added 13 and Hughes had 8.