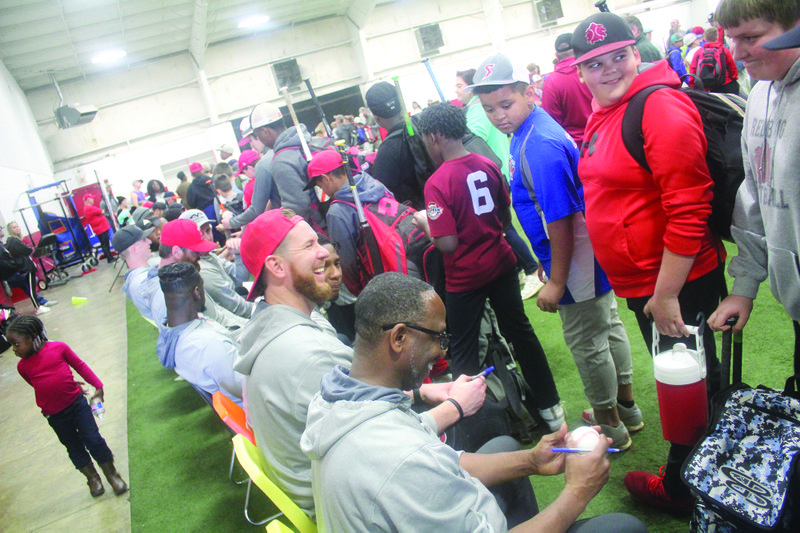 CAMDEN — Over the weekend, baseball and softball enthusiast were treated to a free camp that offer life skills as well as ball skills.

The JD 3:21 Foundation along with the Major League Baseball Players Alumni Association hosted a Legends for Youth camp at Camden Fairview High School.

Camden Fairview graduate, Toronto Blue Jay and founder of JD 3:21 Jonathan Davis held a baseball camp in Camden last year and partnered with the MLBPAA to make the camp even bigger. The camp attendees were able to work out on the CFHS Football Field as well as in the Multipurpose building. Throughout the camp, Davis and other friends, mentors, coaches and MLB players offered encouragement to the children while also teaching them the game.

Davis created the foundation to inspire youth to have “hope” and stress the importance of hard work and working on fundamentals.

MLBPAA is in the middle of celebrating its 38th year with the mission of promoting baseball, raising money for charity and protecting the dignity of the game through its alumni players. According to Chloe Hoeft Special Events Coordinator for MLBPAA, the MLBPAA has raised $70M since its inception in 1982 and its Legends For Youth program will impact more than 19,000 children this year alone. Camden was the first stop for the MLBPAA on a series that is set to hold events internationally as well as all over America.