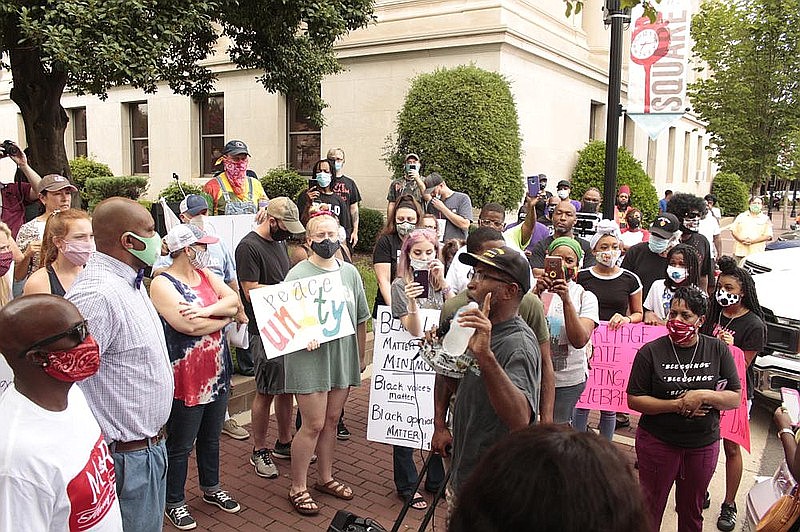 Groups in support of and opposing the Confederate monument at the Union County Courthouse gathered Saturday morning in demonstrations voicing their feelings on the matter.

The monument has been the subject of scrutiny lately, after local resident Glen Glover made a presentation at a meeting of the county Quorum Court saying he felt the monument should be taken down. He has not been able to be reached in the time since.

A Monument Committee was formed to explore the legalities of the monument’s potential removal or relocation, as well as to hear public opinion on the matter. The committee met Tuesday in a packed Courthouse boardroom, where they agreed to research the monument’s history, ownership and public sentiment.

On Saturday, a demonstration in favor of keeping the monument at its current location was held. Justice of the Peace Will Crowder, who represents District 8 on the Quorum Court, was in attendance Saturday.

“I serve the will of the people — the majority, okay? I understand everybody has the right to protest and do what they want as long as they do it peacefully and by the law, and what people have stressed to me — well, I know 99% of the people, my constituents in District 8 — is wanting the monument left alone because its been there for over 111 years and this monument only serves as honor to the people that fought and died in the Confederate war,” Crowder said in an interview Saturday afternoon after the protest had ended.

Abigail Jerry organized the counter-demonstration, she said. She said she was led to do so because she saw that a family member of hers was a member of what she said was a “hateful, violent” Facebook group that organized the pro-monument demonstration and wanted to stand in solidarity with Black people in the county.

The private group, Union County Historical Protection Group, was created June 24, the day following the Monument Committee’s meeting and the first day the News-Times reported on the issue.

“I was just exercising my freedom of speech. I was praying for them,” Jerry said after pro-monument protesters had cleared out late Saturday morning. “I just don’t think this monument is okay … and I wanted to say Black lives matter.”

“I believe that the County Judge we have right now is a good man. I believe he’ll do what’s right. I believe he’ll take these petitions and count the votes,” one demonstrator said, referring to petitions gathered during the demonstration Saturday. “I believe that if we’re in the majority, they’ll do the right thing; if that’s not the case, they will not remove this statue. We have to take a stand. Nobody’s going to stand up for your rights but you.”

Both groups reported an altercation between members. In Crowder’s Facebook video, a pro-monument demonstrator can be seen addressing the counter-demonstrators directly while standing within the “temple structure” of the Confederate monument.

“He said he ought to knock me out,” Jerry said. “I wanted to get between them since I organized it and asked them (Lopez and other counter-protesters) to come.”

An El Dorado Police Department presence was at the demonstration, but according to people on both sides of the issue, they did not intervene during the altercation. Crowder said pro-monument demonstrators stepped in before police were needed. Counter-protesters said they thought the police should have stepped in. EPD Chief Kenny Hickman couldn’t be reached by press time Saturday.

Erica Hinton and Jackie Jackson both said they were driving by the Courthouse when they saw a large man raise his hands toward Jerry as though to hit her. They stopped to intervene, they said.

“I have kids her age,” Jackson said. “To see a grown man old enough to be her grandfather attack her over her beliefs — I wasn’t letting that happen.”

“They said ‘go back to your country.’ My parents paid the money and did everything they were supposed to for us to be here,” Lopez said. “They said they were going to bring the hammer down on me.”

Crowder said he and about three other men held the man involved in the altercation with the counter-protesters back. He said a counter-protester sat in the street after the altercation, which he said was illegal. She can be seen standing up and moving out of the way of traffic, which continued to drive by while she was sitting, shortly after he states in the video that protesting in the road was illegal.

“These young kids are being misled. They are being fed a false narrative of racism, but if you look back at history, racism is what everyone who wants a change turns to. All they want is to be in control with a government in control and they want everything free,” Crowder said. “I honestly believe that this is a socialist, Marxist push to divide and conquer in a new society with a new world order.”

The counter-demonstrators who were there originally, including Jerry and Lopez and members of the El Dorado High School Young Democrats, were joined by Hinton, Jackson and Keith Coggins, who said he saw a Facebook Live video of the happenings, including the altercation, and felt compelled to show his support for the counter-demonstration.

“I just feel, as a decent man, that I shouldn’t let anything happen to any female. People have the right to believe what they want to believe in, as long as it’s not hurting anyone’s freedom or safety. This is America,” Coggins said. “I just feel like as a late-40s guy, all the things my grandparents and uncles told me were going on in the 60s — political unrest … It has that same vibe now that it had in 1968.”

Crowder said he wanted to get the message “all lives matter” across, and that was why he attended the demonstration. He said the Confederate monument is related to that message because it “was put there to honor the people of the Confederate war; that is, black and white people that fought in the war in Union County side by side.”

“It does not show any white supremacy when black and white fought in the same war. It’s a false narrative is what’s being spewed out of these people’s mouths. I’m not racist; some of my best friends are black. I love everyone,” Crowder said. “For them not to admit that all lives matter, that destroys their false narrative. God sent his son to die for everyone … People need to wake up and understand that Satan is controlling their minds if they don’t believe a baby’s life matters or all lives matter.”

Hinton, a resident of Union County for 42 years, said she had never seen anything like the demonstrations that took place Saturday locally until then.

“It makes me angry, because I would’ve thought change would’ve happened in 60 years,” Coggins said. “But hate was carried from one generation to the next. I don’t think hate is inborn; hate is taught.”

The pro-monument demonstration concluded with a prayer led by Crowder. Afterwards, a pro-monument demonstrator can be seen crossing in front of the camera Crowder was recording with wearing a shirt that shows James Earl Ray, who pleaded guilty in 1969 to murdering Martin Luther King, Jr., with a slogan including a racial slur for Black people followed by the word “killer.”