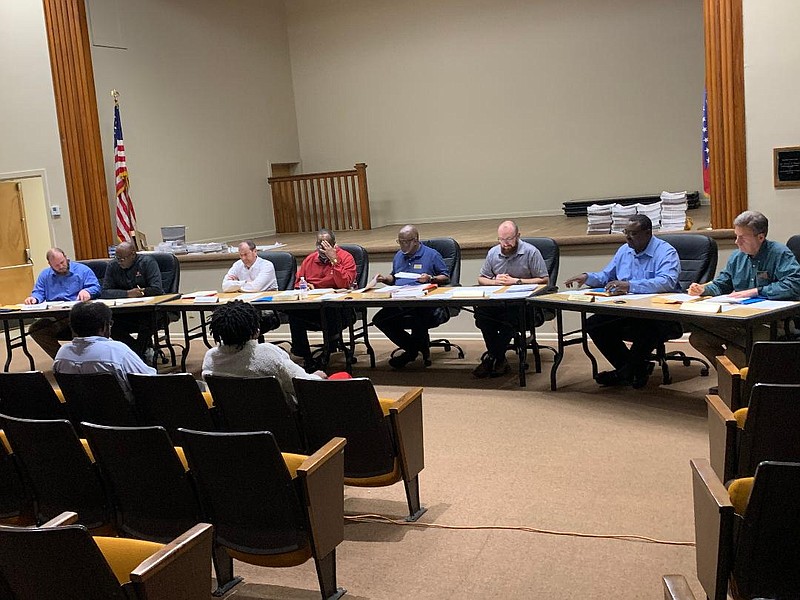 The Camden Fairview School Board had a lengthy meeting to address several pressing issues in the wake of the coronavirus.

Earlier this week, Arkansas Governor Asa Hutchinson ordered for all schools to close until March 30 to prevent the spread of Covid-19. As of Wednesday, there are 33 cases of coronavirus in Arkansas.

The board voted to amend the agenda almost immediately after calling the meeting in order. The presentations from the FFA and Arch Ford were removed from the agenda as neither of their representatives were able to attend.

The meeting began with the principals of each building providing updates on their distribution of the Alternative Method of Instruction (AMI) packets. Fairview Elementary Principal Treasa Thrower and Ivory Primary Principal Iris Davis both said that two days of AMI packets had already been passed out earlier this year but the remaining three days will be available for pick up during lunch distribution and are online. Camden Fairview Intermediate School Principal Amy Sanchez said that all five days of the AMI packets have been distributed but more packets will be available during food distribution in the Stephens and Camden Housing locations to make sure all of the students receive them. CF Middle School Principal Cara Bowie stated that all five days of AMI packets have been passed out to the students and that they will also be put on the website. CFHS Principal Gary Steelman presented the AMI packets to the school board and said that the work is in line with the subjects that will be on the ACT Aspire test. He said that the AMI packets will be available on Facebook as well.

After the AMI updates, the board went in to student hearings for nearly an hour and a half. The hearings resulted in all four of the students being expelled.

The meeting reconvened with transfer request.

Johnathan Haynie asked to allow his child to transfer to Nevada because of the altercations she is getting to in school. Bowie said that a non contact agreement was in place between Haynie’s daughter and another student and that the child’s placement has been changed. Bowie added that Haynie’s daughter is “a very likeable child” and that she has been in contact with Haynie.

“I feel like I know whats best for her,” Haynie said.

The board voted to deny the request.

Justin and Nicole Brummett made a case for their child to stay in the Smackover School District. The parents said that they were told by Smackover that their child would be “grandfathered in” and be allowed to stay at Smackover because the child’s sibling had gone to school there.

“I guess the bottom line is, if you live in our district, you’re supposed to go to school here,” CFSD Board member Dr. David Mosley said. “I understand your prospective and I appreciate and acknowledge that but that’s still the bottom line. We have to abide by the ruling.”

Moore added that there are several students the district is working to get back.

“It’s not that we are trying to divide or separated the family,” Moore explained. “That’s not us. That’s not why we are here. We are here to uphold the policies of Camden Fairview Schools.”

The school board voted 5-2 to deny the Brummett’s request for the child to stay in Smackover.

After a board member asked if they could make a temporary ruling, Moore said it has to be allow or deny. He also questioned why the district should spend money on investigators if they are not going to be getting children back in the school district. He talked about how he had to attend a school that he didn’t want to go to just because of where he lived.

“I’m not trying to be the bad guy here, but why do we send an investigator out to Harmony Grove and then we allow people to come and stand before us and still allow them to go back out to Harmony Grove,” Moore asked. “Either we participate in this exemption or we let it go.”

The school board voted 5-2 to allow the children to remain at the Harmony Grove School District.

CF Assistant Superintendent Johnny Embry gave an update on the Summer Food Service Program and shared that food is being distributed to students while they are being held out of school amid the coronavirus and CF Director of Transportation and Maintenance made a presentation regarding the purchase of new school buses. The school board voted unanimously to buy five new school buses on a six year loan with Farmers Bank. This move would allow for five buses that were used for trips to now be used on the routes. The five new buses will be used for the trips.

CF Superintendent Fred Lilly said that he would not have a report due to school operations being suspended but did say he wanted the school board to think ahead about about the 2020-2021 classified and licensed salary schedules. He said that former CFSD Superintend Mark Keith put the school on path to exceed the state minimum base pay. Right now, CF’s base pay is more than $34,00 which is above the state average of $31,000. He said that in four years, the base for CF will be more than $36,000.

Also during the meeting, the board voted on reorganization with the new additions of Ben Goss and Nick Tuberville joining the school board. There were no nominees and Moore was voted to remain president, Sean Dorey remained Vice President and Macon Patton remained the Secretary.