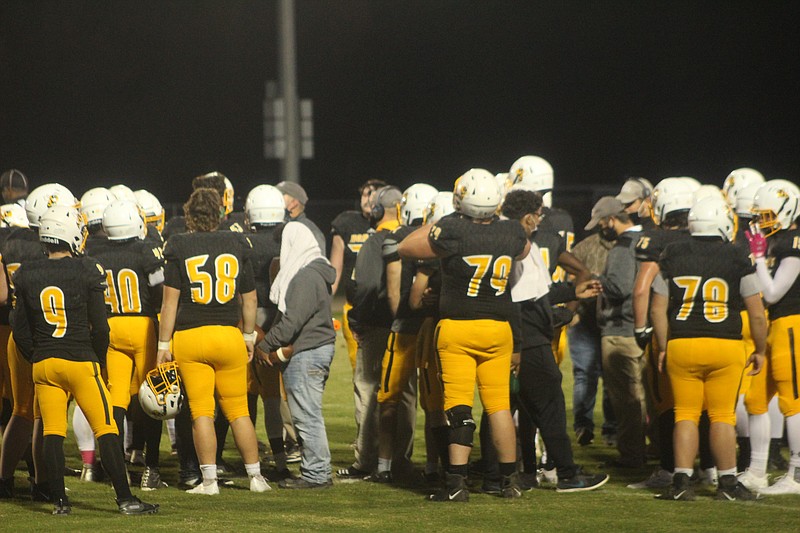 HARMONY GROVE—The Harmony Grove Hornets made short work of defeating the Barton Bears 42-6 at Bill Manning Field last Friday night. The Sportsmanship Rule was invoked with 3:47 left in the second quarter which allowed the clock to run continuously for the remainder of the game, except for called time-outs.

RB Jeremie Edwards put the Hornets on the board first with a 20 yard run with 8:25 to go in the first quarter. Braden Brown kicked the PAT giving the home team a 7-0 lead.

After an interception of a Barton pass HG scored on a 34 yard run by Freshman QB Caleb Johnson with 5:53 to go in the first period. Brown kicked the PAT giving the Hornets a 14-0 lead.

On the next series the Bears turned the ball over on downs at their own 39 yard line. At 3:07 in the first quarter Daniel Hill scored on a 36 yard run. After Brown’s PAT Harmony Grove led 21-0.

Coach Ernie Horstcamp’s squad added two touchdowns in the second quarter. The first came with 6:46 to go in the half on a 12 yard run by RB Mecca Arnold. Brown’s PAT was good . The score was 28-0.

With 3:48 to go in the quarter the Hornets benefited from Barton QB Hakeem Hancock’s mistake in throwing the ball out of bounds while standing in his own end zone resulting in a safety giving HG a 30-0 lead.

After a failed on-sides kick the Hornets set up deep in Bear’s territory which ended with a 28 yard touchdown run by Edwards, for his second score on the night. Brown missed the PAT, but the home team was up 36-0 with 3:47 to go in the half.

Each team tacked on touchdowns in the second half. Harmony Grove scored on a 7 yard run by RB Shamar Patterson with 37 ticks left in the third quarter. The PAT failed leaving the score 42-0.

Barton finally got on the board with 7:32 to go in the contest when TB Ethan Ward scored on a 1 yard run setting the final score of 42-6.

The Hornets have qualified for the Class AAA play-offs. Their opponent and date of that contest are pending at this time.