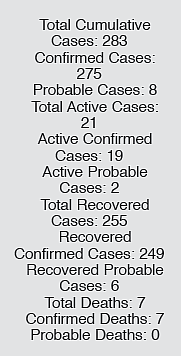 LITTLE ROCK — Arkansas reported its biggest one-day increase in new coronavirus cases on Thursday and the number of people hospitalized because of the illness caused by the virus climbed to a new high.

The Department of Health said the state's confirmed and probable cases rose by 1,265 to 90,145. This was the state's biggest one-day increase since it reported 1,180 new probable and confirmed cases on Sept. 11.

The number of people hospitalized due to COVID-19, the illness caused by the virus, rose by nine to a new record high of 547. Twenty-one more people in the state died from COVID-19, bringing its total fatalities to 1,503.

Gov. Asa Hutchinson called the latest increase a “sober reminder" of the virus' threat in the state.

“It is in virtually every community across this state," Hutchinson said at a meeting of his cabinet. “There's not a grocery store, there's not anyplace you go that you can avoid being mindful that someone there may have the virus."

Arkansas ranks 9th in the country for new cases per capita, according to figures compiled by Johns Hopkins University.

The department said 1,066 of its new cases were confirmed, while 199 were probable. The actual number of cases in Arkansas is likely higher because many people have not been tested, and studies suggest people can be infected and not feel sick.