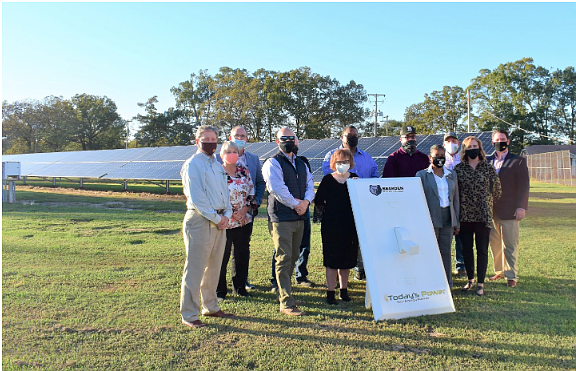 The Bearden School District solar array, located on their campus, is now commissioned and operational.

Dedicated to innovation, education, and sustainably operating the campus, the Bearden School District solar project was designed to offset the energy use of the campus. Projected to save the school district $25,000 a year, the 1,140-panel system can produce over 720,000 kilowatt-hours (kWh) annually.

“This is a great opportunity for our school district. All of us on the school board applaud Denny’s vision to get this project off the ground, and for us to become the first school district in South Arkansas to become solar powered,” said Doris Parham.

Bearden School District Superintendent, Denny Rozenberg said that “Cost savings for the 20-year contract will be approximately $500,000 for the district.

Savings are being achieved simultaneously while the district is reducing our carbon footprint. From the point of our joint contract signing with South Central Service Cooperative, to this point, where we are ready to start generating solar power, the process has been very smooth. The whole team of Today’s Power has been professional and reliable to work with.”

Choosing North Little Rock’s Today’s Power, Inc. (TPI) as its energy partner, the 20-year agreement with TPI is a win-win for Bearden School District and its students. The savings from the purchase power agreement are to be reallocated to services for the school district.

“Partnering with the Bearden School District is truly an honor. 90 percent of the energy usage of the district will be offset at a reduced rate by solar power. Such savings will be reinvested in the community and will be able to go back to the students and education directly,” said Michael Henderson, President of Today’s Power, Inc. “This project exemplifies the capacity of Bearden School to reinvest in the community. Projects like this mean that you are not paying for electricity that is being generated in a neighboring county or state. However, this does not come without vision, but this school board has shown its progressivity and brought this project online,” he added.

A press conference was held on the evening of October 13th, 2020 prior to the Bearden School District’s School Board meeting to announce the completion ofthe two campus-based solar arrays. Present at the event were Senator Trent Garner, Bearden Mayor Ginger Bailey, South Central Service Cooperative Director Karen Kay McMahan, Executives from Today’s Power, and the Bearden School Board.

Speaking at the event, Senator Trent Garner said, “As a political figure, projects like this mean progress, it is that simple. I grew up in Ouachita County, and when I was a kid here if you would have told me we were going to have a solar farm at my school, I would have said that is something from Star Wars or Star Trek. Now, in rural Ouachita County, we don’t only have a solar farm, but an opportunity to generatesavings and a better quality of life for the students and the whole community. This is a project of hope and progress.”