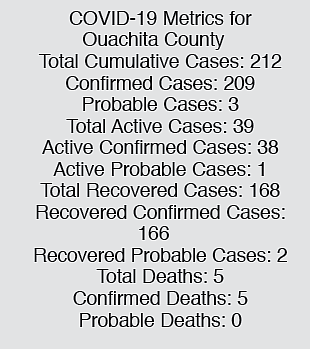 LITTLE ROCK — Arkansas on Monday reported 399 new confirmed cases of the coronavirus and 10 more deaths from the illness caused by the virus.

The Department of Health said at least 69,449 people have tested positive for the virus since the pandemic began. The department also said an additional 21 people tested positive through antigen testing since Sunday, bringing the total number of those cases to 1,178.

The department said 992 people have died from COVID-19, the illness caused by the virus, since the pandemic began. Five more people have been hospitalized, bringing the total to 378.

The actual number of cases in Arkansas is likely higher because many people have not been tested, and studies suggest people can be infected and not feel sick.

For most people, the new coronavirus causes mild or moderate symptoms, such as fever and a cough that clear up in two to three weeks. For some, especially older adults and people with existing health problems, it can cause more severe illness, including pneumonia, and death.

There continued to be discrepancies, however, between the state's figures and those announced by individual campuses. The state reported 735 active cases at UA, while the school on Monday said it has 334. Arkansas State University in Jonesboro reported 187 active cases, more than three times as many on the state's tally.