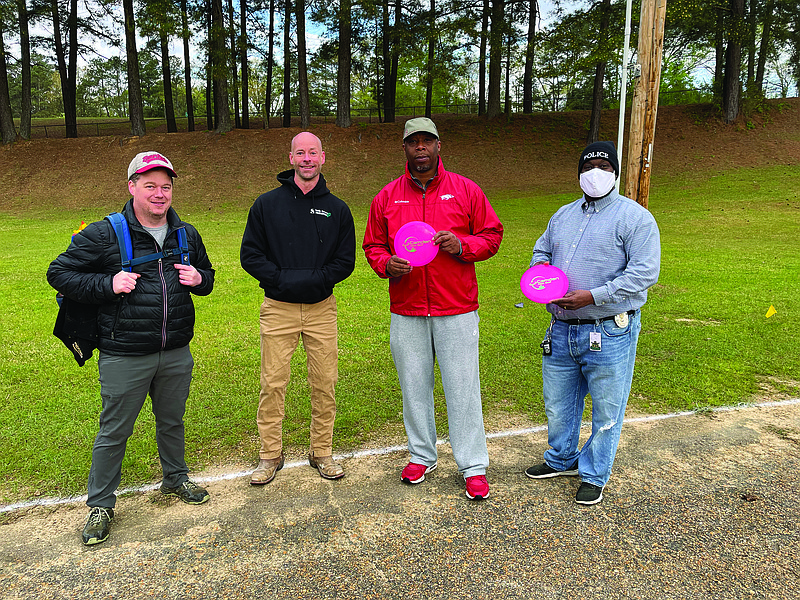 A local city park’s latest attraction drew a sizable and diverse crowd for a trending sport over the holiday weekend.

Camden hosted its first Disc Golf competition at Carnes Park on Saturday welcoming enthusiast and athletes from around the state as well as Tennessee, Oklahoma, Texas and Louisiana.

The course was put in development about a year ago led by Jerry Brent Ray and Travis Daniel. Ray spoke during the event and thanked Daniels, Chase Steed, Camden Mayor Julian Lott and Camden Public Works Director Kevin Franklin.

“It’s good for the community,” Rays said. “It’s some thing to do. It’s free, fun, it’s exercise… it’s all the things that the community needs right now especially in the times we are in with the pandemic. It’s naturally social distanced because we are spread out over 25 acres. Wasn’t for these guys (Lott, Franklin and Daniels) and Chase coming in to help with the designs from Texarkana and cutting trees on a course he’ll rarely even get to play. This is a great turnout, especially on Easter weekend. Any other weekend it will probably be doubled.”

Around 65 players across ages and genders played as the temperatures were just right for disc golf. Steed and Ray played Hole 8 with Franklin and Lott to open the event. Matt Loyd of Dynamic Discs Northwest Arkansas was also in attendance to offer vending services.

Ray said another disc golf competition is being scheduled for August.