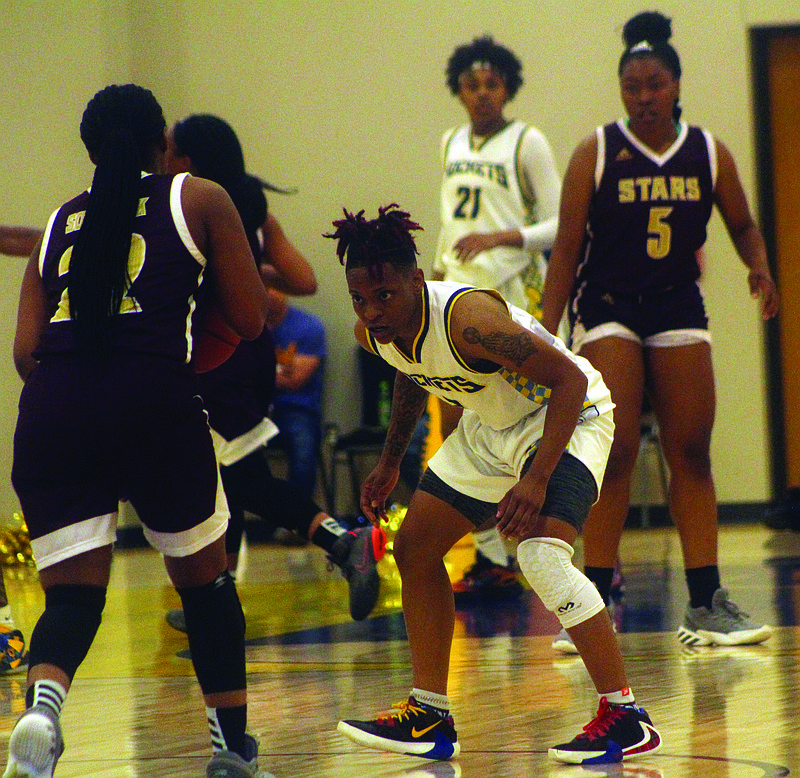 Deneshelle “Neesh” Barton holds defense on a South Arkansas Stars player during a recent game. The Lady Rockets advanced to the Semifinals of the Region II tournament by defeating SouthArk 70-53.

On to the next round.

The Lady Rockets overcame a slow start to defeat the SouthArk Stars on the SAU Tech campus on Friday, 70-53. The win advances the Lady Rockets to the Semifinals of the Region II tournament.

The Lady Rockets trailed 23-13 after the first quarter as it appeared the week lay off from its regular season finale had an impact of the team’s offense. The home team was relatively cold from outside as the Stars did the opposite by getting to the bucket and scoring through the Lady Rockets’ challenging defense.

SAU Tech would bare down on defense in the second quarter holding SouthArk to just three points. A Robyn Gordon assist to Peyton Peoples for a three would tie the game at 26 at the half. Energetic play from Ta’Kyla Allen (12 points and five rebound) and Jordan Shelton propelled the Lady Rockets going offensively and that carried over into an explosive third quarter for the home team.

The Lady Rockets would go up 35-32 when Deneshelle “Neesh” Barton (12 points) got up after taking a hard shot to the ribs chasing a loose ball to drive and kiss a shot off the back board. SAU Tech’s defense would then force a 10 second violations - its first of three in the second half - to make the Stars call a timeout around the five minute mark of the third quarter.

SAU Tech would take a 47-40 lead into the fourth quarter and a couple of late threes by Shelton helped seal the win.

The Lady Rockets will travel to play North Arkansas College on Tuesday in the Region II Semifinals.