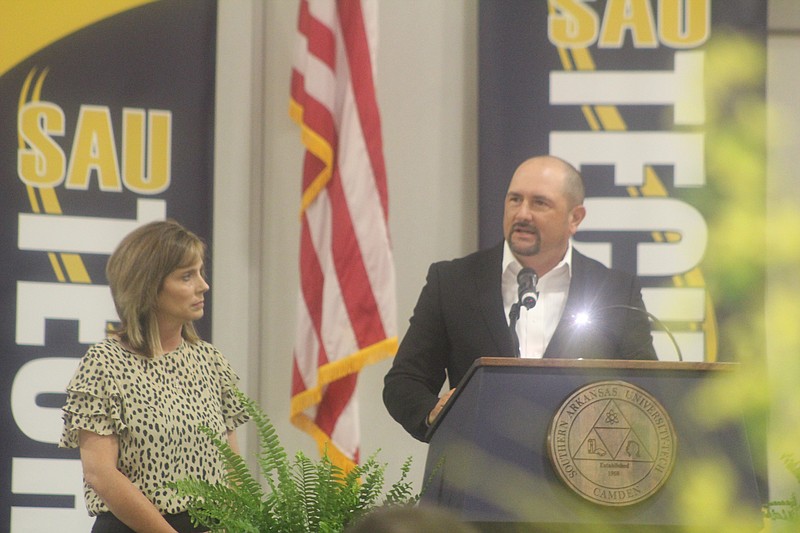 In addition to a speech from former UA Football Coach Houston Nutt, the announcement of the Rocket Baseball team and the recognition of some of the college’s biggest supporters, the student athletes were recognized by their coaches.

SAU Tech Chancellor Dr. Jason Morrison received a call from SAU Tech Men’s Basketball Coach Marty Levinson as the team was on its way back from the NJCAA Division 2 Tournament. This was the programs first time being invited to the “Big Dance” of Division 2 Basketball. The Rockets loss in the first round to Ancilla College in a close game before winning their next three games to finish 7th nationally. The tournament was held in Danville, Illinois.

An excited Levinson thanked everyone for their support and said the team was happy to be in a position to win its last game of the season. Now he is looked forward to next year and a lot of his players returning. The Rockets won the conference championship with a 9-1 record in conference play and finished the season 20-5 over all.

“I don’t think people are fully grasping what it means for us to be this successful in an extremely competitive basketball environment in such a short amount of time,” Dr. Jason Morrison said. “To take down the teams we’ve taken down. If you look at the Division 1 side at two of the teams in the final four in D1. We beat one and lost by three to the other one. There were three others in that tournament that your Rockets have defeated as well.”

SAU Tech Athletic Director and Co Head Softball Coach Amy Diehl gave a fiery address about the importance of preparing student athletes to be successful in their next steps in life. She said that she wears many hats as a coach, teacher, wife and mother and that she has learned that its not unusual for some students to enter college after experiencing 18 years of trauma and not even knowing where their next meal is coming from and that’s why it is important to show them that they are cared about.

She shared how blessed she is to be a part of such a wonderful family at SAU Tech before introducing her husband, and Co-Head Softball Coach Philip Diehl.

Philip Diehl started by saying how much of a pleasure it was from him to meet Houston Nutt and shared that his house was still raucous with support for Nutt even after he had left Arkansas. Then he thanked SAU Tech Chancellor Dr. Jason Morrison and the school’s executive board before announcing the awards for his team.

Ciara Victor and Henessae Shaver received the Captain’s Award. Philip said that Shaver was the program’s first recruit and now she will be going to play D1 Softball at UAPB. She also won the Home Run award. She along with Victor and McKenna Smith (4.0 GPA throughout college) were named Academic All Americans as well. Victor received the Best Fielding Average award.

Ashley Moore was given the Right for the Brand Award. Philip explained that it was also named the “Mad Dog” award to honor Maddie Lee who would’ve received the award last year if the pandemic didn’t impact Rocket Night. He explained that the award is given to the players that are all in and do everything for the team without complaining.

Philip then said that he and Amy would try not to get emotional while presenting the Making History award to McKenna Smith. They shared that she has made “tremendous strides in her life” and that they hope she will remain a part of their lives going ahead. Smith is a Camden Fairview graduate and she hit the first home run in SAU Tech Softball History.

Philip called the entire softball team to the podium along with assist coach and son, Aric. Aric is close to receiving his coaches degree and was in attendance with his wife Maranda and their month old daughter Josie.

“We are super proud of this team,” Williams said. “We’ve been through a lot of ups and downs as all families go through. We’ve also had to deal with the pandemic as well as a lot of injuries.” Ta’Kyla Allen was presented the Most Improved Player award while Peyton Peoples and Jordan Shelton were recognized for making the All Region Second Team. Alexandria made the All Region First Team and was announced as the Conference MVP. Sophomores Deneshelle “Neesh” Baton, Robyn Gordon and Christiana “CG” Gibbs were recognized for their contributions over the last couple of years.

SAU Tech Cheer Squad Coach Stephanie Morrison awarded the whole team and shared warm words about each student athlete as she announced them.

“They stuck through it,” Stephanie Morrison said. “Because of that this has probably been the best cheer season we’ve had. I have enjoyed every single one of them.”

Near the events closed, SAU Tech Chancellor Assistant Amber Savage announced that nearly $1500 was raised during the silent auction. Mike Shelton of Generations Bank and Blake Fain of Farmers Bank combined to pay $2,300 for a Houston Nutt autographed helmet during a live auction.