Out on the town: Native Dog Brewing 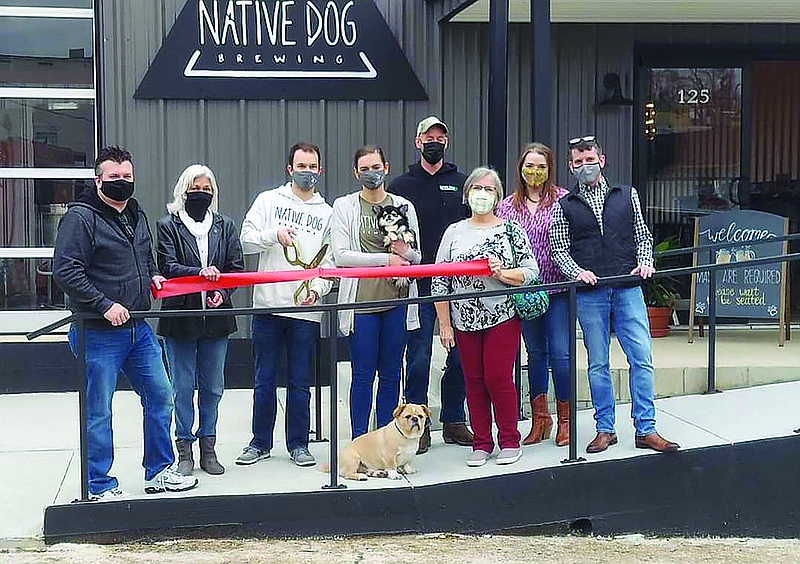 What started as the dream of two local pharmacists, Bobby and Lauren Glaze, has become a full fledged phenomenon.

“Honestly it’s been really overwhelming. I didn’t expect to have the amount of businesses that we’ve had so far , and it’s been incredibly humbling and overwhelming to say the least. Because it’s not just people- the outpouring from Camden, the local community has been amazing- but what people don’t realize is that brewery’s bring people from all over. So we’re getting people from El Dorado, Magnolia, Little Rock, Conway, Mena. It’s pretty awesome every weekend, you see people from all over, but they’re traveling here just because they’ve heard about this place.”

Baxter, the canine prominently featured in the logo, is also a fixture in the brewery. And for good reason, He is the native dog in Native Dog Brewing, as the two picked him up when they were interning at a pharmacy on a Sioux reservation in South Dakota.

“We went out there and spent about a month and a half there; about halfway through, this scruffy little dog kept breaking into the clinic we were working out. We fed him out of our lunchbox, played with him. One of the locals said, ‘Oh the dogcatcher is coming to get him today.’ I said ‘Ok, he’s going to the pound.’ Glaze says ‘No, he’s going to pick him up and shoot him, we don’t have a pound, we have too many dogs here.’ She (Lauren) starts crying and next thing I know I’ve got a dog loaded up in the truck and seven years later this dog lives a life better than most human beings do,” he said.

While Baxter and the dog friendly atmosphere are a nice addition to the brewery, an equally aspect is the diverse styles of beer on tap. The Camden News sat down with Bobby and discussed the flavor profiles of what Native Dog has to offer and also offer a glimpse of what’s to come in the next few months for the taplist.

“Our goal is, when people walk through these doors, I don’t expect them to like every beer that we make, but we’re going to find something you can relate to and you can enjoy,” Glaze said.

Glaze said the most popular beer in the house is one that caught him off guard. A dark horse and a dark stout that has broken through in the land of light domestics like Bud Light and Coors.

“Bat out of Hell, it’s the one that surprised me the most, because generally don’t see stouts as a number one seller, ” Glaze said, “Part of the reason is that ours is an American style stout, you pick up a lot of chocolate out of it, there’s some roasted coffee notes in that beer. But it drinks really easy for being almost a seven percent (alcohol) beer. I brew my stouts with a thinner mouth fill. A lot of people when they think of stouts they think of Guinness and that thick creamy mouth feel, but I don’t go for that with the Bat out of Hell, I go for a different profile, so it’s a little thinner on the palette.”

Even if the Bat out Hell isn’t your cup of tea, or pint of beer as it were, you might enjoy the flavor of Native Dogs springtime offering;Daffodil Blond.

“For Daffodil, I really wanted to go for a really clean blond ale. The key to a blond is it throws up what we call ester characters, so it’s got some slightly fruity notes to it when you pick it up. That also plays along with the cascade hops I use in that beer. Cascade also throws up some floral aromas. That beer, I think it’s the perfect beer for sitting on the patio, you have more than one of them. It’s a thirst quencher. It’s a really good beer at the end of the day, that if it’s hot outside or just springtime, it’s a patio beer,” Glaze said.

A variety of different brewing traditions are represented in the brewery and the Pluggeweizen, which is brewed in the German Heffeweizen, and probably the hardest menu offering to pronounce, is a perfect example of this.

“Pluggeweizen is probably my favorite beer we have on tap right now. It is a very traditional German heffeweizen. It’s the perfect beer for spring or summer. It throws some notes of banana and clove. The key to that beer is we use wheat from Lauren’s grandparent’s farm in Hartman Arkansas. So that’s where the name comes from, their last name is Plugge.”

For the beer drinker that wants to venture into more bitter territory, the Double Dog IPA offers a staggering 8.9 percent alcohol.

“That’s the strongest beer we have on tap. It’s a big beer. It is a traditional what we call West Coast style IPA. So, as soon as you taste it the bitterness from the hops are going to grab you in the back of the throat, but there is enough malt built into that beer that the malt sort of balances out the bitterness. My hop profile for that, I kind of went for, you should get notes of pine, you’re going to get some grapefruit. I went for a clearer IPA the old school west coast.”

Another bitter brew memorializes a pillar to the community , Dr. James Rocconi, a well loved veterinarian who was known for his muscadine wine. In that vein, Doc’s Muscadine Saison, is a French farm house ale and part of the proceeds will be donated to the Ouachita County Animal Protection Society.

“When Lauren and I built this place, community was key in mind. And we think about people that meant alot to this place, Doctor Rocconi stands out. Over his 50 year career there’s no telling how many people he helped out, not only with his animals, but also organizations that he gave his time money and energy to in this town. You want to talk about a person giving of themselves, Dr. Rocconi is it. He is truly one of my heroes, I can always remember going in his office and he would always have muscadine wine going and he was known for his muscadine wine. Right before he passed was the first time I ever brewed this beer, and we talked about and he said he really wanted to try it, but he never got the opportunity, Glaze said.

While it may seem a muscadine wine would taste sweet, it may surprise some folks Glaze says, “Saison in general is a really dry beer style. So whenever you drink a Saison, the flavors that come to mind for me whenever you smell a saison, it almost has a hay or straw type character off of the nose, but when you add the muscadine in, it almost has a white wine smell. So you get a little bit of tartness from the muscadine. The key is, the beer yeast used takes all the sugar out of the muscadine. It’s not sweet like people would think. You get that back flavor of muscadine, but saison yeast has a very particular flavor, so it throws a lot of what we call phenols that almost gives a spiciness to the beer, and I think it plays really well, it marries right along with muscadine. So you get some spicy almost white pepper notes off of it, a little bit of straw in the nose and then the muscadine comes through and gives it the pallete.”

“The key to New England IPAs is, they are not the IPA that people think of. They don’t have the bitterness, they are going to be a lot more hop forward, so you bring out all the good characteristics of hops. So we picked out some hops in this beer that throw, you’re going to pick up some apricot, overripe pineapple, and we changed the water chemistry in it so it has almost a juicy more mouth feel, rather than it being crisp and clean like a typical IPA it sticks around a bit longer on the tongue and kind of coats the mouth”

This is the first of the Bird Dog series, a planned regular collaboration of the breweries.

Glaze said “It’s one of the few industries where everyone is there to help everyone else. The outpouring of help that people are willing to get is incredible. Any time you need something every brewery is willing to help in anyway they can. The understanding is that the more breweries we have in this area and in Arkansas in general. The more people are exposed to craft beer.”

For those planning on home brewing, Glaze says that the most important thing is cleanliness.

“Brewing is only 10 percent of the process. Cleaning is 90 percent.”

In addition the beer, Native dog also seltzers, wines, ciders and even home brewed sodas, as well as a rotating line of food

Native Dog offers a little something for everyone, even for die hard traditionalists. Glaze said “People do like having more flavor in a beer, they just don’t realize it. A lot of people have never put themselves out