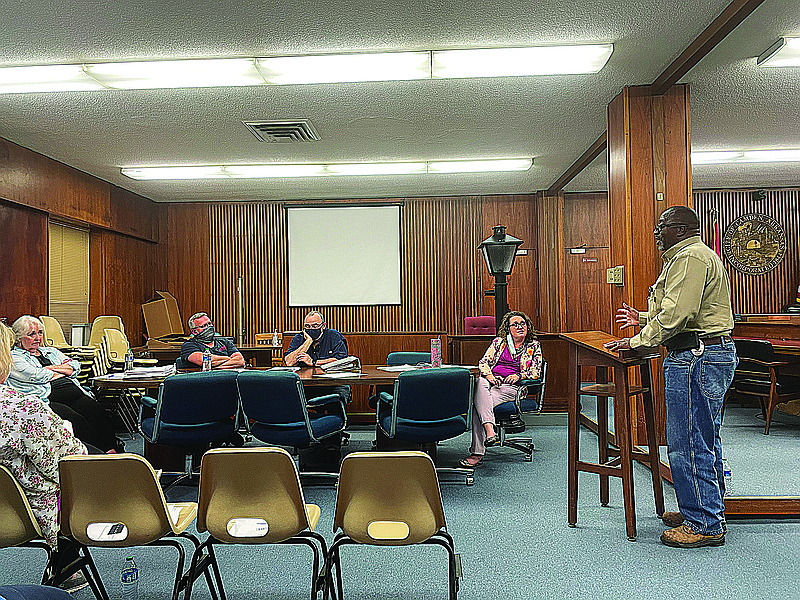 The Camden Advertising and Promotion Commission held its monthly meeting on Tuesday and heard a presentation regarding upgrades at Carnes Park.

Camden Code Enforcer Ben Wooten was accompanied by Camden Mayor Julian Lott and architect Keith Carr to discuss renovations for the Teen Town Building. Wooten explained that there is a need for another building that people can use as a place for events and could serve as another place meetings can be held in case of a pandemic where people need to social distance.

“We don’t have a building of that magnitude in Camden other than the Ross Center to host events were people can have reunions and things like that,” Wooten said. “The building is 53 years old and contractors have said how amazed they were to find it still in tact… We want to do some things that will jazz up the building.”

Wooten stated that the building is 6,000 square feet and that the biggest things would be replacing the roof and making the building ADA accessible. He also shared how the renovations at the park could be another source of revenue for the city.

“When i was raising my kids and we drove out to AAU ball games and stuff, we spent a lot of money,” Wooten said. “We had to get hotels and pay for food… We just had a disc golf tournament that had 72 people here. Then we’re looking at the far ball field and thinking about making a Dog Walk or park. That attracts people here.”

Carr shared that he has been consulting craft contractors such as electricians and plumbers about ideas and estimates and all of them agree that the building is still in good shape. He said that he has met with the contractors consistently and hopes that they will be able to provide a solid dollar amount soon.

Commissioner Lori DeWoody agreed that another building in the city for events is needed.

“Being in the hotel business we have a lot of calls - when its not covid - for family reunions and places to go,” DeWoody stated. “I think this town needs that very much so.”

Wooten said that with the renovations the building’s capacity would increase to 299 from 199.

Lott explained that money for the renovations would come out of the Parks Budget and that he asked Wooten and Carr to come by as a courtesy so the commission could be aware of what was going on.

“We have a lot of things that we need to bring up to code,” Lott said. “The kitchen, the bathrooms and making the stage movable. These are things that help us to follow our own laws so there’s no way we can avoid doing these things. I just didn’t want to move forward without at least introducing this.”

Lott spoke highly about the Fairview Event Center and said that while it is available for residents to use, the City of Camden need’s its own building.

Wooten added that there are plans in place to change out lighting at the ball parks, cut some of the gum trees down for more parking and installing picnic tables on the south side of the Teen Town building so people can look at the games.

Chairwoman Clara Freeland asked about an update on the paint at the basketball court and Commissioner Mike Tidwell said that the court resurfacing had been completed and was “absolutely wonderful.”

Also during the meeting, the A&P Commission approved the purchase of new Christmas decorations for downtown and confirmed the approval of funds for the Juneteenth celebration. Jeremy Ables of JC Productions also provided an update on upcoming summer events such as Juneteenth, First Friday, fishing tournaments and disc golf tournaments that are set to happen over the summer.