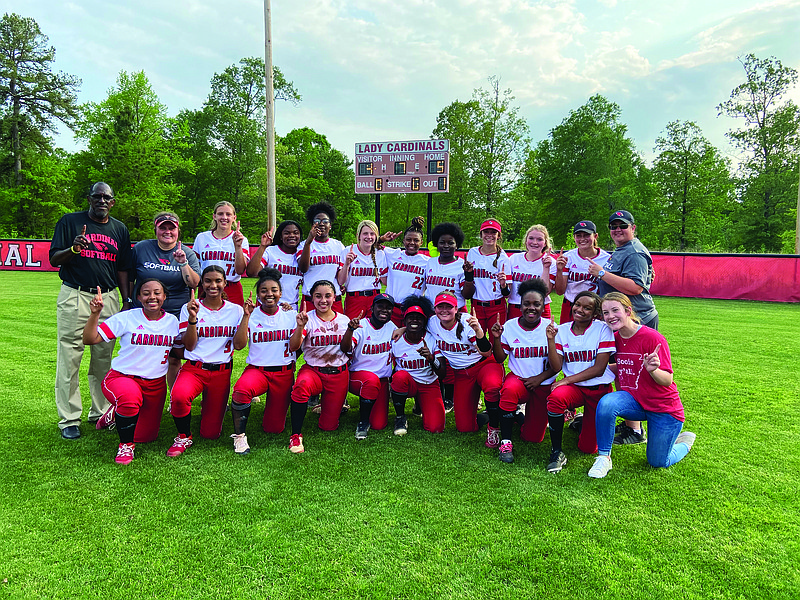 After being tied for first place with Star City for the No. 1 spot in the 8-4A throughout the season, the latter dropped a game to Magnolia leaving Camden Fairview in position to win the conference.

But it wasn’t going to be easy.

The home team scored a run in the second inning when Tamia Dandridge hit a single to score Chavez and again in the third when Griffith slid in from third on an error. After Magnolia tied it in the top of the 4th with a two run homer, Dandridge would score on an error at third base. Magnolia would pick up two runs in the fifth to take the lead back.

Flash forward a couple of innings and now it’s the top of the seventh. The home team has surrendered an early 2-0 lead and are now trailing 4-3.

Anxious parents and fans are pacing outside the ball park and three CF student athletes are facing the possibility of their last home game being marred by memories of their conference rivals celebrating on their home field.

The Lady Cardinals hadn’t scored a run in three innings at the time and the confidence of the Lady Panthers rang loudly from the dug out.

It might’ve been forgivable if the Lady Cardinals counted their blessings and accepted a loss. It’s a team full of underclassmen. Sure, not winning a conference title after coming so close would’ve hurt, but a second place finish and a 12-2 conference record would’ve still been quite an accomplishment.

But the Lady Cardinals haven’t accepted “good enough” all season and they weren’t accepting that now. A determined squad emerged from the dugout as CF Head Softball Coach Kendra Center challenged her team: “How much do you want it? This is it!”

Sophomore pitcher Haylee Monden had just pitched seven innings on the road against Crossett on Tuesday night and she along with the Lady Cardinals outfield would need to keep the Lady Panthers at bay in order to have a chance for the win.

The CF Lady Cardinal defense was stingy. Makalee Tate tracked a ball over center field to give the home team its first out and while the second batter for Magnolia hit a double, the third hit a foul ball that Arianna Frazier was able to make an athletic play on by diving and securing for a second out. Then Monden retired the last batter on her own.

Now it was the home team’s turn at bat.

Julia Milner, the granddaughter of long time CF fan, photographer, supporter and friend Jerry Milner was up first and she crushed a single just right of center field to get on base. Monden followed in similar fashion with a single of her own over to left field. Makayla Griffith was brought in to run bases for Monden.

In a selfless play, Emily Robertson hit a sacrifice bunt to advance Griffith and Milner to second and third. Frazier was next to bat and a catcher’s error allowed her to load the bases. A fearless Karmen Johnson stood firm at the plate as a pitch hit her leg to bring Julia home to tie the game at 4.

Magnolia called a timeout as the momentum swung back in CF’s direction. A composed Alex Chavez - already having hit a double from earlier in the game - approach the plate and sent the third pitch over to left field to score Griffith for the walk-off victory.

The elated Lady Cardinals stormed from the dug out and embraced one another on the diamond as the fans lined up to congratulate them at the gates.

It was more than a game for the Lady Cardinals. It was a triumph over adversity on and off the field. It was a salute to the 2020 seniors who were robbed of a senior game because of the pandemic and a tribute to late supporters and contributors like Jerry Milner and Melanie Doss.

“We always like to say because we believe it to be true, we got two of the best fans sitting in the best seats to help us out a whole lot,” Center shared after the game while reflecting on Doss and Milner. “Overcoming covid last year and the season being taken away like it was, our assistant coach losing her mom kinda knocked the wind out of us and then losing big time fan Jerry Milner last year. W just had a lot of adversity coming in early. But I thought that as soon as we got back, the kids hit the ground running and we never stopped. They don’t even know it, but what they’ve done from Day 1 until now is incredible. They’ve completely changed the face of Camden Fairview Softball.”

“They grind every single day. They don’t like to lose and that’s the thing you have to have to be successful in this sport. The seniors they did what they were suppose to do all season and you don’t always expect that from the freshman and sophomores too but that’s exactly what we’ve gotten from them. Lex (Chavez) stepping up right there at the end of the game and that’s just what good hitters do. Keep the moment where it is and do what you have to do to be successful.”

CF Athletic Director stated that the teams success has been a community effort and a testament to the hard work the Lady Cardinal Coaches and student athletes have put in over the years.

“First one in school history. It’s a great feeling,” Tucker said. “I’m happy for these kids and happy for the coaches. They put a lot of time in. A lot of them play Travel Ball when they aren’t playing for the school and it’s paid off for them. Today is a great moment and a great day for Camden Fairview softball and the community of Camden. We got a conference championship now. I’m just excited for the coaches, kids and parents. They laid it on the line, and hey, they had some adversity. They came back today and showed what to do when you get down. We could’ve folded our tent but we didn’t. Came back in the last inning and won the game in exciting fashion.”

The Lady Cardinals will travel to Nashville next week to play the 4th seed from the 7-4A at 3 p.m. on Thursday in the South Regional Tournament. A single win there will advance the Lady Cardinals to the 4A State Playoffs.