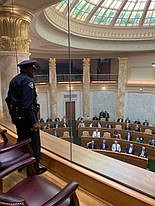 Submitted Photo L.C. 'Buckshot' Smith looks over the Arkansas House of Representatives as he is honored for his years of police work.

The resolution read as follows:

WHEREAS, Buckshot became a sheriff's deputy fifty-six (56) years ago and was a deputy for forty-six (46) years before retiring for a few short months -- he realized very quickly how much he enjoyed the work and subsequently joined the Camden Police Department, where he has served ever since; and

WHEREAS, Buckshot loves the excitement of being a police officer, and though he is ninety-two (92) years of age this year, he has no plans to retire; and

WHEREAS, Buckshot is beloved throughout Camden, serving during annual festivals, in the courthouse, at his church, and for his neighborhood watch; and

WHEREAS, his dedication, his work ethic, and his friendliness have made him a cherished member of the Camden Police Department,

NOW THEREFORE, BE IT RESOLVED BY THE HOUSE OF REPRESENTATIVES OF THE NINETY-THIRD GENERAL

ASSEMBLY OF THE STATE OF ARKANSAS:

THAT the House of Representatives commend L.C. "Buckshot" Smith on his dedication and service to the Camden Police Department.