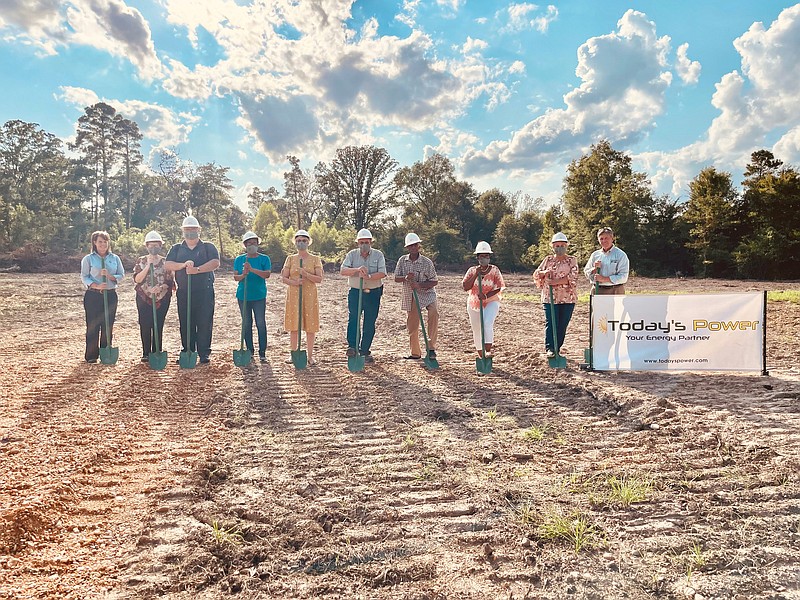 Mayor Ginger Bailey, City Council Members, leaders of Ouachita Electric Cooperative (OECC), and executives at Today's Power, Inc. (TPI) attended the groundbreaking which was held on August 9th at 5:45 pm at one of two sites where the City of Bearden is collaborating with TPI to break ground on two new 200-kilowatt (kW) solar power systems for municipal use.

"The City of Bearden places a high value on being excellent stewards of our natural resources," Mayor Bailey said. "Bearden is committing to contribute to a healthy environment while also saving the city money through this solar project. We will be able to accomplish both thanks to our partnership with Today's Power."

Once constructed, the city will only be responsible for purchasing the kilowatt-hours (kWh) generated from the systems, not for their ongoing operation and maintenance. These two variables work together to keep the city's energy costs stable and manageable.

"Working together, we will help the city increase their resources for renewable energy and help the city, our member, save on their energy. These projects are an example of how utilities and large-scale power consumers can meet the needs of the future through innovation and partnership," said Mark Cayce, General Manager of Ouachita Electric Cooperative.

This project came to be after the city conducted a Request for Proposal (RFP) process, which enabled the city to secure very competitive long-term pricing with TPI. During the design phase, the two 200-kW solar arrays will be tailored to ensure maximum efficiency. Construction will begin in the early fall.

TPI, a renewable energy company formed by Arkansas rural electric cooperatives, will build, and own the solar arrays, while OECC and Entergy will maintain the sites' existing electricity connections. Over the last five years, TPI has installed more than 40 renewable energy projects totaling more than 60 megawatts in Arkansas, Oklahoma, Kansas and Tennessee.

"To be successful, a project like this demands exceptional vision, leadership, and collaboration," said Michael Henderson, President of TPI. "Special thanks to Mayor Bailey and the Bearden City Council, Ouachita Electric Cooperative General Manager Mark Cayce, and all of their teams for their dedication to the project's success," he added.

Bearden is located in Ouachita County. The town was an important center for the timber industry and was a railroad town along the Cotton Belt Railway Line. Its city limits were created in 1882 by the Southwest Improvement Association, an agency of the Railway Land Office. The town was named after one of the lawyers for the agency, Judge John T. Bearden.

TPI's unique approach to in-depth analysis of utility rates and billing allows it to design renewable energy systems and manage that energy to maximize the benefits of solar and storage for not-for-profit as well as for-profit entities.

Ouachita Electric Cooperative Corporation is a non-profit rural electric utility cooperative headquartered in Camden, Arkansas, with a district office in Hampton, Arkansas. The Cooperative was organized in 1938.