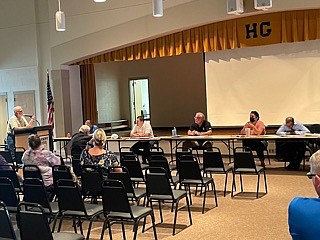 Dr. Larry Braden speaks to the Harmony Grove school board at a heated meeting.

(Update: The names of the school board members were used from the latest Arkansas Department of Education Data Center as a list of the board members was unable to be found on the HG School District website.)

Tensions spilled over into the parking lot after a local school board voted in favor of a mask mandate.

The Harmony Grove School District held a school board meeting on Thursday. In addition to hearing an update on bond savings, school numbers and financial transfers, the board discussed the possibility of a mask mandate.

The meeting opened with audience participation. Dr. Larry Braden took to the podium and shared that he had been asked by someone to come and share some facts about the Delta variant of Covid-19 and how it has been proven to spread quicker. He said that it would be hard to share everything that needs to be said about the virus in the allotted time and that after he spoke he would need to leave to get to a vaccination event being held in Camden. Braden stated that the pandemic is the 17th world wide pandemic and it is amongst the worst. He said he was "terrified" by what he has seen among his patients and advised everyone to be wise.

Ty Turner was next to speak during audience participation. He shared that he is a parent of two students in the school and he wants nothing more than for the school to flourish. He shared that he was diagnosed with leukemia when he contracted Covid and he was thankful that it didn't hit him as hard because he has friends who have died from the virus. Turner said that any mask that is not N-95 or better is a waste of time. He said that there was data from the Center of Disease Control and the New England Journal of Medicine that prove that the cloth masks that the school has access to don't work and could also help the virus spread because of the moisture. Turner brought print outs of the information and invited the board to observe his findings.

HG Superintendent Al Snow gave background as to why the board was discussing it. He explained that as it stood, the district's policy was that students would have a choice or rather or not they wanted to wear a mask, but that was before the increase in cases and Act 1002 which prohibits state and local government, including school boards, from requiring people to wear a mask. Last week, Pulaski County Circuit Judge Tim Fox ruled Act 1002. Snow shared that several local districts had adopted a mask mandate and that the board would vote on having a mask mandate at HG, a $200 incentive for vaccinated staff and 10 days of pay for teachers that have to miss work due to the virus.

When the board arrived to the mandate, Snow said that he would entertain one more person from each side about the issue if they felt that had any other information to offer besides what had been stated already. No one signaled or approached the podium.

Snow then asked for HG High School Principal Jeff Mock to talk about quarantine. Mock said that he had been in contact with nurses and the department of health and they assured him that the district has been doing everything right. He said that there were options for a 7-day quarantine, a 10-day quarantine and a 14-day quarantine and the school stuck with the 10-day quarantine. He explained that there was an issue with separation and isolation. He said that if someone was in a home with another person that tested positive, then there quarantine days wouldn't start until they isolate themselves from the person that tested positive so it was possible for someone to miss up to 20 days. He and Snow encouraged people to not rely on home-Covid test and to contact health professionals. Mock then said that he had students show up to registration that were supposed to be at home quarantined and students show up to activities on campus that were sick.

"We will not be able to finish this year if parents do not keep the sick kids at home," Mock said. "That's an absolute fact. I don't care if you wear a mask or not wear a mask. If a kid has a fever or they are throwing up or whatever the issue is. Do not put them on a school bus and do not drop them off in front of a school Stay at home and call the nurses office. I know its frustrating but I have to keep my teachers safe and the students safe so that we can have school."

Mock then asked if he could share his thoughts about a mask mandate from the high school's perspective and shared that he didn't want the school to persuade anyone to do anything. He said that it wasn't a reason not to do it, but he would have a hard time enforcing it because there would be students arrive on campus with stick orders from parents not to put the mask on. I, as a professional educator, have ethical issues with standing in between what should be a parents decision in deciding rather their child should wear a mask or not. If my son was at school here this year. I am adamant about the fact that he would not put a mask on his face and if he did put a mask on his face it would be an N-95.

HG Elementary School Principal Matt Patterson that believes that if mask are worn then just like social distancing and vaccinations then the spread of the virus would slow but not stop. He emphasized that he didn't believe the school was trying to make any political stand but to just do what's best for the children.

Snow said that he had spoken to people on both sides of the issue and was aware that no matter what decision the board made someone would not be satisfied. He also said that because there was only six members than the motion would die if the vote was split in half.

After a short discussion and a couple of the board members sharing that they were having trouble hearing, Wendy Nix made a motion to enforce a mask mandate for K-12 students and it was seconded by Jerry Wilson. When the motion was called to a vote, two more board members raised their hands in approval. Another two board members voted against the mandate. This led to several members in the audience standing up and emotionally exiting the room and speaking out from the audience.

As one member of the audience voiced that the school board didn't understand how hard it is to teach a kid how to read with a mask over their face, Wilson responded:

"(The law) makes you wear a seat belt. They make you wear an orange vest (when you are walking or jogging near a road), come on now. We are trying to protect our kids. We can come back and vote this back out next month (if we need to), get it together!"

As audience members were standing and voicing their opinions, Mock took back to the podium and hinted at his disagreement.

"I am faced with a slight little issue," Mock said. "...I may not have half the students on campus on Monday and There may not be a high school principal on the campus Monday."

One unnamed member of the audience asked why the four board members that voted in favor of the mask mandate weren't wearing a mask but were sitting close together. Then he asked if there was some sort of incentive for the school board to do this in which one member replied, "Not a dime."

After the meeting was adjourned, a few attendees made their way back into the building and called for Snow and law enforcement because of tension flaring in the parking lot. One of the witnesses stated that Wilson and Mock were "face to face". Wilson was seen arguing with Mock from inside a truck as he pulled off and Mock was heard yelling his address to Wilson as he was being held back.