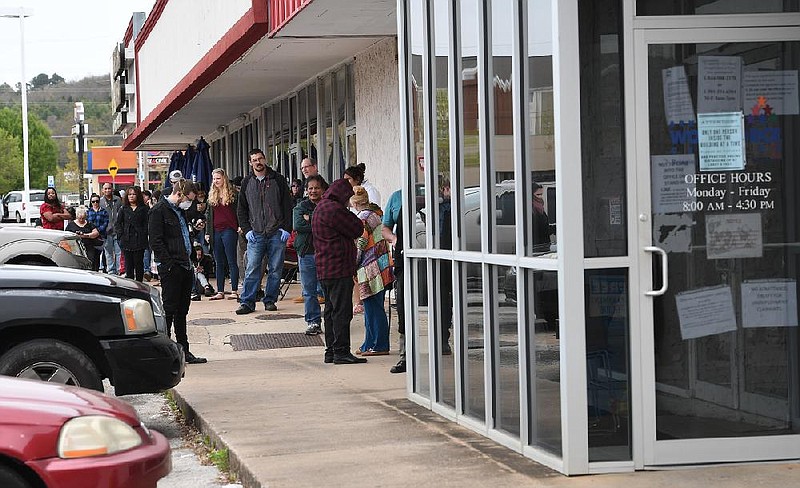 A line of around 50 people extends from the door of Arkansas Workforce Center, Monday, March 30, 2020, in Fayetteville. (NWA Democrat-Gazette/J.T. Wampler)

Multiple lawmakers aired concerns at a Tuesday morning meeting on whether being fired for refusing to be vaccinated will affect jobless benefits for former employees.

It was the second meeting this month in which state lawmakers expressed concerns over businesses mandating that employees get vaccinated for covid-19.

Some businesses in Arkansas require employees to be vaccinated against the coronavirus and now that the Pfizer vaccine has received full approval from the federal government, some anticipate that even more employers will require their workers to be vaccinated.

Charisse Childers, director of the Arkansas Division of Workforce Services, was scheduled to speak before the Administrative Rules Subcommittee of the Legislative Council about amending a regulation that requires employers, under state law, to provide printed notice informing their workers that they may be eligible for unemployment benefits in the event they no longer have jobs.

The amendment that was approved by the committee turned the regulation into a rule and added a requirement for employers to give employees a copy of a notice that makes them aware of the probability of unemployment benefits upon separation of employment. There is no penalty for noncompliance, and it gives the employer the discretion in how to deliver the notice.

Legislators spoke at length with Childers during the meeting, but the conversation strayed away from the amendment and went into specific detail about potential terminations when it comes to vaccination refusals.

Sen. Terry Rice, R-Waldron, told the committee that one of the hot issues he sees is the pending terminations of employees who don't receive the vaccines.

He said he has heard that employees have been told numerous things, including that they can't file for unemployment and that overtime will not be paid unless they are vaccinated.

Childers said the law still stands regarding unemployment insurance and the rights of individuals who are no longer employed. She said the rule doesn't change anything except that employees will receive a notice about unemployment options upon their exits.

"Everyone is entitled to file for unemployment and, of course, the facts of the case will be considered upon their filing," she said.

Rice said his purpose in asking the question was that he didn't want to give out wrong information.

"This is a life-changing move for many people. I would like to get them directed to the right agency to answer those questions," he said.

Sen. Kim Hammer, R-Benton, also asked a similar question on whether people can receive unemployment benefits if they have been terminated because they didn't get vaccinated.

"Given the fact they were a model employee otherwise and the only reason they got terminated was the vaccine," he said, "what is the department's position when those cases come before you?"

Childers told the committee that no decision will be made based on those circumstances.

Hammer asked the Division of Workforce Services to create a list of people who were terminated for not receiving the vaccination and to give it to the committee monthly for the next three to four months. He said he didn't want the names, just the number of people who were denied unemployment strictly on the basis of not getting the vaccines.

Childers said she would look into the request but added that unemployment claims, especially during the pandemic, have a number of issues attached to them.

"Just because a person doesn't receive unemployment doesn't necessarily mean it was specifically because they didn't have the vaccine," she said.

Childers was also asked by legislators if the division could add a page on its website to allow Arkansas residents to post if they filed for unemployment and didn't receive it because of the vaccine refusal, under the concern that the firing will be disguised as failure to comply with company policy.

"This information is captured when they file for unemployment insurance along with the employer's response," Childers told the committee.

Childers said there isn't a check-box for vaccine refusal on the unemployment form, but neither were other reasons, like not showing up to work because of a sick child.

"It's a blank form as to the reasons they were terminated," she said.

Sen. Ricky Hill, R-Cabot, said the unemployment benefits status for those who are terminated for vaccine refusal was as clear as mud to him.

"When you are dealing with unemployment when somebody quits they are usually not eligible because they quit their job, but if they are terminated for insubordination, which is what that could be if they don't take the vaccine, they are pretty much ineligible for unemployment," he said. "The wording is going to be key, and a lot of these people aren't going to understand the wording you use to get unemployment. Insubordination for not taking the vaccine is a major issue because they didn't follow the directives."

Gov. Asa Hutchinson said at a Tuesday media briefing that he has always supported the private sector and the decisions they need to make for the workforce, "so they have that prerogative."

"I support them in making that decision," he said. Many businesses will decide not to require vaccinations of their employees because of the staffing challenges that they have or the unique environment that they might work in and others may make a different decision, he said.

"I do believe that because there is [U.S. Food and Drug Administration] full approval now, that there will be more businesses that look at that as a public health requirement for the workforce. That's their decision. I support their freedom to make that decision for the workforce."

As far as state government, he said he doesn't anticipate any change or action that would necessitate a change in the prohibition on having a vaccine requirement for state employees.

"The law prohibits it," Hutchinson said. "There is a law on the books that the Legislature passed that says that we do not have a vaccine mandate requirement."

The House and Senate Committees on Insurance and Commerce met jointly with the Senate Committee on Judiciary on Aug. 10 to discuss proposed legislation that would block businesses from having vaccination mandates for employees. The committees heard about six hours of testimony from business leaders, attorneys, doctors and members of the public.

A circuit judge has temporarily blocked a state law that forbids most state and local governments, including public schools, from requiring masks during the pandemic. In the aftermath of the ruling, dozens of school districts instituted mask requirements. Before that ruling, the Legislature refused Hutchinson's request to allow schools to mandate masks for children under age 12, who cannot be vaccinated.

Thousands of new cases of covid are diagnosed in the state each week.

Information for this article was contributed by Michael R. Wickline and Rachel Herzog of the Arkansas Democrat-Gazette.